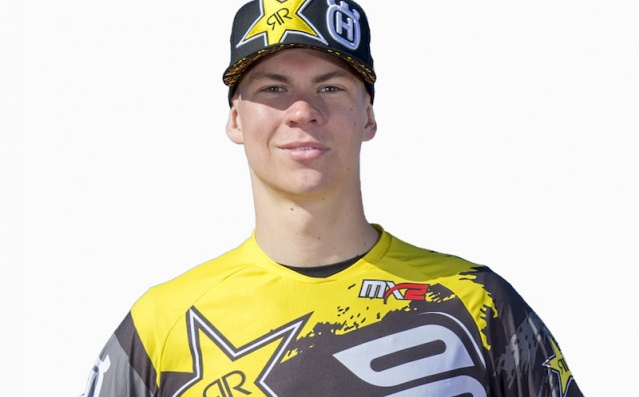 Thomas Kjer Olsen (Rockstar Energy Husqvarna) raced to his second moto win of the year in the opening MX2 race at today’s MXGP of Trentino but Tom Vialle (Red Bull KTM) extended his championship lead by an additional four points with second as title rival Jago Geerts (Monster Energy Yamaha) came home in fourth.
“I just felt great out there and it showed,” said TKO. “Throughout the moto I was more and more comfortable and if you want to make a pass out there you have to make it happen.”
Geerts holeshot the 30-minute plus two lap race from Vialle and Britain’s Ben Watson who immediately began to pressurise the series leader before being surprised by Michael Sandner (Gas Gas).
After being passed by Olsen, Watson and Sandner clashed over a jump with Sandner appearing to drift across into the British rider’s path and both went down.
Geerts and Vialle went bar to bar and swapped places before Geerts struck back, only to drop to fourth after stalling in a left-hand turn.
After inheriting second, TKO kept Vialle in sight and with six minutes left on the clock the Dane swept around the French teenager in a long right-hander to take the lead.
At the flag TKO was two seconds clear of Vialle with Aussie Jed Beaton (Rockstar Energy Husqvarna) third from Geerts and Ruben Fernandez (SDM-Corse Yamaha). Conrad Mewse (Hitachi KTM fuelled by Milwaukee) was best Brit in sixth, four places ahead of Watson who fought back from 20th after his fall.
Josh Gilbert (PAR Homes RFX Husqvarna) ended the race in 16th with Bas Vaessen (Hitachi KTM fuelled by Milwaukee) 19th.