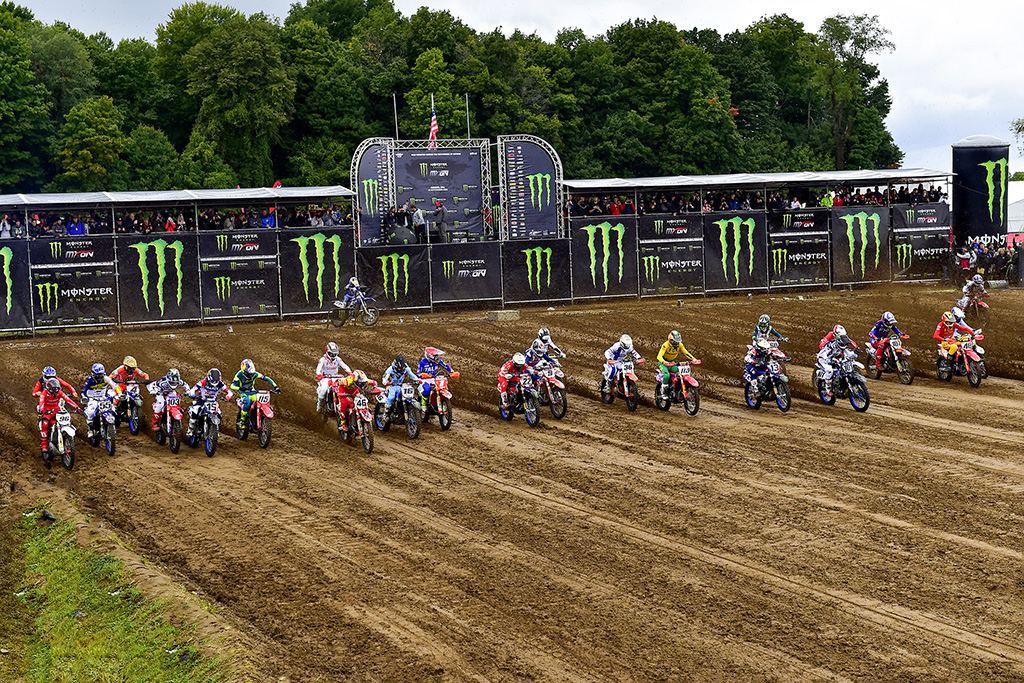 While yesterday’s qualifying day presented the perfect weather conditions, today was a different story, with an overnight downpour and continued rain throughout the day creating some challenging conditions which tested not only man but also machine – but did not hinder the spirits of the thousands of fans who showed their support! The atmosphere around the venue was next to none, with incredible support from start to finish by the huge crowd of fans that turned out in their most patriotic outfits and made plenty of sound throughout the day.

It was a big victory for the hosting nation, as Tomac, Cooper and Sexton made history by putting the American flag back on the top step for the first time since Saint Jean d’Angely in 2011.

In the first MXGP and MX2 combined race, the Fox Holeshot went to Team Belgium’s Jago Geerts who held a very tight line into the first corner ahead of Team USA’s Eli Tomac who took over first place immediately. Team France’s Maxime Renaux was third ahead of Team Switzerland’s Jeremy Seewer as the Yamaha-bound riders dominated the opening race.

Further down the field, Team Italy’s Antonio Cairoli managed to pass Team Australia’s Hunter Lawrence and Team USA’s Justin Cooper, as he moved himself up to seventh, where he would eventually finish the race.

Geerts meanwhile put up a fight to Tomac, as he set several fastest laps of the race, and managed to whittle the gap down to a second or so, before making a mistake and allowing the American to break free again.

Team Netherlands’ Glenn Coldenhoff had an unfortunate start to his race as he struggled down in 32nd in the first few laps, while his fellow countryman Kay de Wolf was in 10th.

Team Belgium’s Liam Everts passed Adamo for 11th as Seewer closed in on Renaux for third. The Swiss was able to get alongside the Frenchman, but could not make the pass stick, despite making several attempts.

Team Switzerland was dealt a blow as Valentin Guillod struggled with his bike and was forced out of the race which meant that a good result from Seewer was crucial for the squad.

Further down the order, Adamo, Team France’s Marvin Musquin and Team Norway’s Kevin Horgmo battled closely for 13th, with Musquin able to find a way past, as Team Great Britain’s Max Anstie came into pitlane with a bike issue.

In the latter stages of the race, Tomac looked in control as Geerts remained close and Renaux continued to fend off Seewer behind him. Team Australia’s Mitch Evans came under pressure from Team Spain’s Jorge Prado at one stage of the race but was able to remain calm and bring it home in fifth for the Aussie squad.

In the end, Tomac won ahead of Geerts, Renaux, Seewer and Evans.

The second rider of the American team, Cooper, started well in fourth, as Australia’s H. Lawrence crashed to re-join in 19th.

Further down the field, Ferrandis was making great progress through the field as he got himself into 11th and set his sights on breaking the top 10, with his teammate Musquin also ahead.

At the front of the group though, Guadagnini was still in control, with J. Lawrence pushing Sexton for that second position. After several attempts, Sexton was able to get through on Guadagnini, though the Italian responded shortly after.

Sexton then lost second to J. Lawrence, who forced the issue on the American. Moments later, the Aussie was also able to get by Guadagnini to lead the second race.

As J. Lawrence led the way, Ferrandis was making moves down in seventh, and then sixth after passing Team Netherlands’ Calvin Vlaanderen and setting the fastest lap of the race. Meanwhile his teammate, Musquin was coming under pressure from H. Lawrence, who eventually passed the Frenchman but then threw it away moments later.

Sexton then got around Guadagnini for second, as also Cooper closed in on the Italian, but Guadagnini was able to hold off the American until the chequered flag.

In the final and the most crucial race of the day the Fox Holeshot went to Renaux, as Ferrandis took over the lead almost immediately, which meant it was a 1-2 for Team France, followed by Sexton, Prado, Seewer and J. Lawrence.

Geerts crashed as he headed towards the second corner, which also caught out Tomac and meant both riders had to work their way up from the back of the field.

Evans, who was running pretty well at the beginning of the race crashed and got going again in 35th. The Australian managed to bring it home in 28th by the end of the heat.

Ferrandis was looking fast, with Renaux fending off a hard-charging Sexton who was pushing to get by. On lap four, there was a change for the lead, as Ferrandis crashed and got going again in sixth.

Renaux was the leader with Sexton, J. Lawrence, Prado and Seewer just behind. Tomac was in seventh at the time, but Ferrandis had a big enough gap to the American that he did not have to worry too much about potential pressure from behind.

Prado then dropped two positions to Seewer and Ferrandis, as Lawrence charged down the inside of Sexton to take second on lap eight. The Australian then focused his attention on Renaux who was keen to bring the win home for the nation.

In the end, Renaux held on and took the race victory from J. Lawrence, Sexton, Ferrandis and Seewer. Team USA ended up as this year’s winners with a 16-point scorecard ahead of Team France who ended up second with 23 points ahead of Team Australia who were third with 26 points.