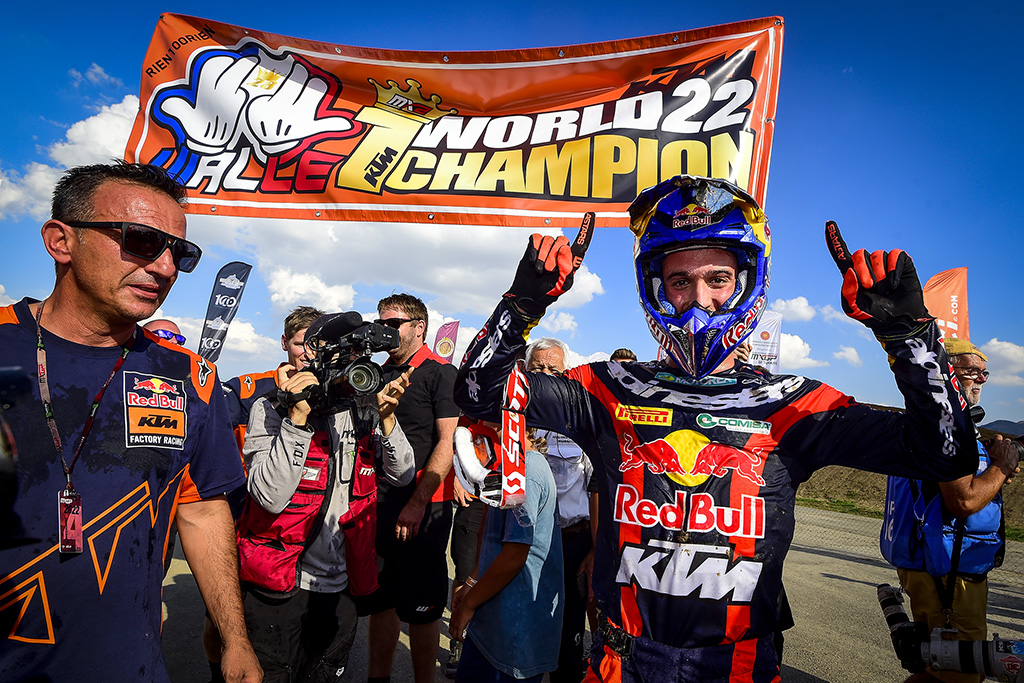 The pair entered the final heat of 2022 separated by just one point, with Vialle having the upper hand. Though despite plenty of tense moments and Geerts’ best effort, Vialle was able to get the job done and celebrate in style with the perfect 1-1 scorecard.

De Wolf and Längenfelder briefly battled for second, before Geerts was able to get in the middle of that to take over third place and focus on de Wolf ahead in second place.

It looked like Vialle, and de Wolf was settling into a good race pace, which was worrying for Geerts, but he was able to find his rhythm too and made a pass on the Dutchman on the third lap.

With Geerts in second, it was all eyes on the title hopefuls as Vialle got his head down to set the fastest lap of the race and extend his lead to 4.188 seconds.

Diga Procross KTM Racing’s Liam Everts dropped out of fifth and went back to eighth, before quickly finding his way past SM Action Racing Team YUASA Battery’s Andrea Adamo for seventh. He then passed Jan Pancar of TEM253 with two laps to go, to finish sixth.

With Vialle setting the pace in first, the leader did make a couple of mistakes, one of which almost cost him the lead! But he was able to keep it on two wheels, as Geerts continued his charge towards the front.

On lap 10, Geerts crashed but managed to get going just behind de Wolf, which meant that he had to do all the work again to salvage vital championship points. It took the Belgian two laps to get back into second place, but by that point, Vialle was too far in front.

Entering race two, Vialle was one point ahead of Geerts in the championship and a good start was crucial to have the upper hand for the title. This time around the Fox Holeshot went to Geerts who immediately led with Monster Energy Yamaha Factory Racing’s Thibault Benistant right there in second ahead of de Wolf and Vialle.

Though by the end of the first lap, Vialle managed to get himself into second position, as he focused on Geerts ahead.

There was no doubt that the gloves were off between the pair, as Vialle charged down the inside of Geerts in what can only be described as a championship-worthy pass. Geerts needed to re-group, but a couple of mistakes allowed Vialle to pull away.

Vialle made mistakes of his own, which meant that Geerts was straight back onto his rear wheel and was not holding back. The Belgian made several attempts which were almost successful but not quite enough as Vialle was fast to respond.

Around the halfway mark, Vialle crashed which also took out Geerts who was right behind him and had no way of avoiding the Frenchman. Vialle was fast to get going which was a crucial moment for him as he managed to get away from Geerts before he got back on the bike.

The gap was up to 5.094 seconds immediately, but Geerts was on a mission and the purple sectors he was setting proved just that. Geerts was looking to challenge Vialle once again but crashed for the second time which was another tough moment for the Belgian.

The gap was up to 12.186 seconds which eventually Geerts was able to bring down but it was not enough to catch Vialle who won the race and sealed the deal to his second MX2 World title! Geerts crossed the line in second place ahead of Moosdijk, Benistant and Längenfelder.

And there was no denying who the overall winner was, as two race wins saw Vialle on the top step of the podium alongside Geerts and Moosdijk who made his first podium appearance since coming back from injury only a few rounds ago.

In the end, Vialle won the MX2 Championship with a 4-point advantage over Geerts who suffered heartbreak in second ahead of Längenfelder who was third.

“It was a great one, I mean I didn’t get the best start in the second race, but I passed Kay and Thibault and was second behind Jago,” said Vialle.

“I felt good actually and then after two laps, I passed Jago on the start straight. Then Jago was pushing a lot, he passed me two times but I passed him back and then I had a little tip over, and I crashed… When I crashed, I thought, this is it, it’s finished, because we were both so fast, but when I saw that Jago crashed with me, I thought “no way” this is not possible and I managed to get going quickly.

“It was crazy and I was lucky there a little bit, but that is part of the game. It was a long race eventually, I was watching the clock a lot. I am happy, it was a tough season and to finish like this is so nice.”