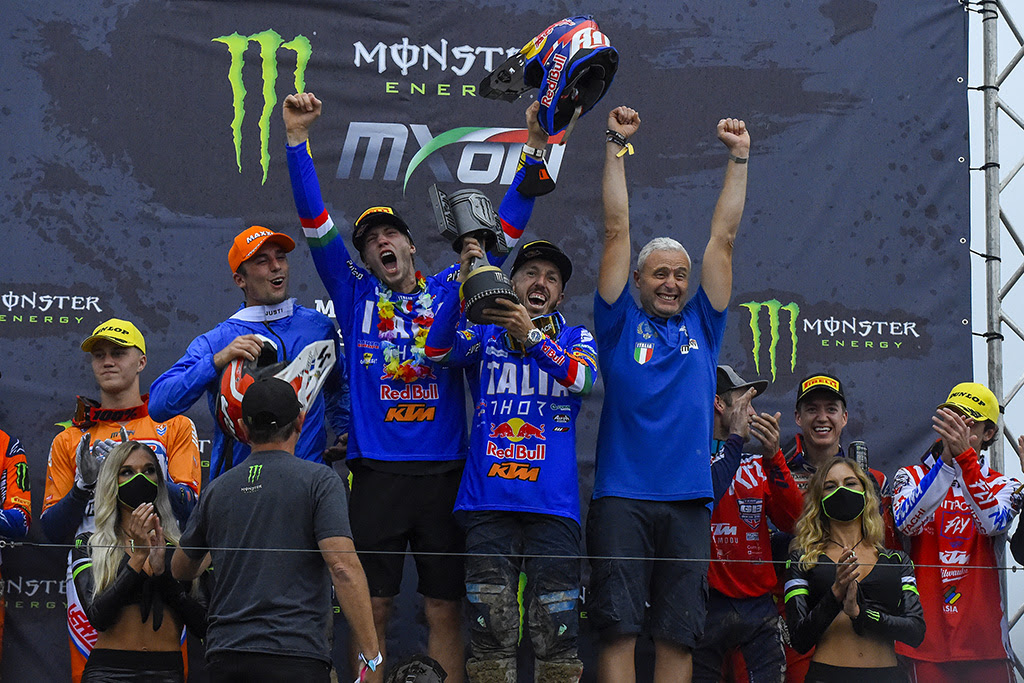 Despite the heavy downpour and the thunderstorm that rocked the day from the first warm up session until the final race of the day, this didn’t hinder Team Italy’s fighting spirit, or the support of the crowd of fans that turned out to support their nations. The trio of Cairoli, Guadagnini and Lupino put together some strong races to secure Italy’s third ever victory at the Monster Energy FIM MXoN, the first since 2002

Joining the winners on the podium were Team Netherlands who finished just one point behind the victors (38 points) and Team Great Britain who obtained their fourth consecutive podium to finish third overall on 39 points.

As the gate dropped for the first race of the day, it was Team Switzerland’s Arnaud Tonus who took the first Fox Holeshot of the day, though Team Latvia’s Karlis Sabulis was quick to take over the lead by the second corner ahead of Jose Burton of Team Spain and Tom Vialle of Team France.

Disaster struck Team Italy’s Antonio Cairoli and Team Netherlands’ Glenn Coldenhoff as the pair went down on the first corner, which meant that they had a long race ahead of them if they wanted to minimise the scores for their nation.

His younger countryman, Mattia Guadagnini was having a strong race inside the top ten and he only climbed further up as the race progressed. The MX2 rookie was able to find his way around Team Sweden’s Isak Gifting, who crashed, and then later Tonus and Sabulis.

With three laps to go, it was Olsen who led Vialle, with Watson still in third, followed by Tonus and Guadagnini. In the end, Olsen was able to hold off both Vialle and Watson to win the first heat for Team Denmark.

In the second heat, we saw Team Switzerland’s Valentin Guillod with the Fox Holeshot, though it was Jeffrey Herlings of Team Netherlands who was quick to take over the lead with Guillod dropping to second and Team Austria’s Rene Hofer starting well in third.

Herlings went on to win the race by an impressive 49.117 seconds, with Guillod securing second for Team Switzerland and Hofer finishing third for Team Austria.

The third and final race, like always, was the most important. It was the decider for the team who will take victory, as well as the teams who were going to join the victors on the podium. Team Italy entered the final race with a solid 19-point lead over Team Belgium who were second at the time, with Team Great Britain third and looking to stay in the fight for the podium.

And as the gate dropped, there was plenty of drama that unfolded which saw the nations classifications change for the final time, keeping the final order in question until the end of the race.

In the final heat of the day, it was Team Great Britain’s Ben Watson with the Fox Holeshot, but once again it was Herlings who muscled his way to the front, with Cairoli managing to squeeze past Watson also. While race one winner, Olsen was one of the unlucky riders who crashed in the start.

Herlings then set the fastest lap of the race as he looked to check out, like he did in race one. Cairoli kept things close for a few laps with Watson remaining third behind the pair.

While Team Belgium were looking to fight for a potential podium finish, they were dealt their first blow with their rider Cyrcil Genot forced to retire from the race early on. Later in the race, Van doninck was forced to do the same. This put the team out of the run for a medal this time around.

Benoit Paturel of Team France dropped to sixteenth place which allowed Olsen and Jasikonis through, while Lupino had a huge crash and dropped down to ninth place.

Not long after, Watson was another rider to get caught out with the Brit going down big. Luckily, he was able to get going quickly and only lost a position to Coldenhoff who was having a much better race that time around.

With five minutes to go before the end of the race, there was drama as a pending penalty put into question Italy’s fate. By that point Herlings had once again checked out of the race as Cairoli was keeping it steady in second.

It was all down to Lupino to make up another position in order to keep the hope of a victory alive, despite that pending penalty for course cutting. It was game on for Lupino who was keen on getting around Sabulis and eventually managed to do so which put him seventh. In the end, the Italian was given a ten place penalty and was classified as 17th.

In the end it was Herlings who won the race and went 1-1 for the first time at the Monster Energy FIM Motocross of Nations, though it was not enough for Netherlands to win, as a 2-17 score in race three from Cairoli and Lupino was enough for Team Italy to secure the victory on home soil. In terms of the race, Cairoli was second with Coldenhoff finishing third.