Home Motocross MXGP MXGP Russia: ‘The track was sketchy so I played it safe’ –... 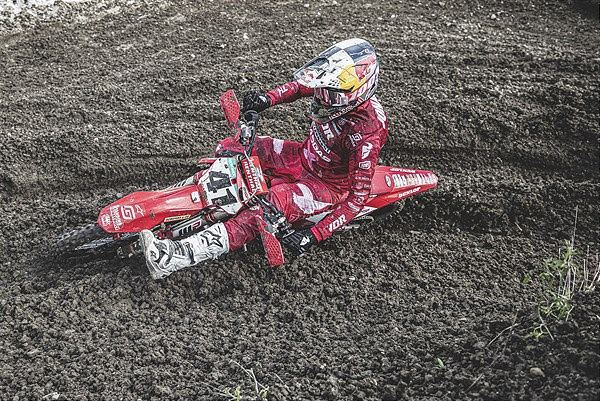 Standing Construct GasGas rider Pauls Jonass had a mixed bag of MXGP results in Orlyonok, but still managed to bag a podium for the team.

Jonass’ first moto was pretty much over before it really started in Russia, after a first-turn crash damaged his fuel tank and after pulling into pit lane, it was decided for him not to continue.

Thankfully, in moto two a tight line around the first turn saw him right at the sharp end of the race, where he stayed battling with Romain Febvre during the early laps.

Jonass kept himself out of trouble, put together lap-after-lap of consistent riding, and opened his 2021 MXGP campaign with a third-place finish.

“It was so nice to be back in the paddock and racing again,” he said. “My first time on the GasGas and it was both really good and, well, not so good.

“Unfortunately, in the first race I crashed in the first corner, which damaged my fuel tank and the bike lost fuel. I pulled into the pits, and we decided it wasn’t safe to continue. Not a great start but then in race two it all came together.

“My GasGas is awesome off the metal start grate so I started up front and just rode a mistake free race. I could have pushed a little harder, but it’s only round one and the track was a little on the sketchy side, so I played it safe. Round one done, one podium, and now onto Matterley Basin in a couple of weeks.”