Tim Gajser (Team HRC) and Tom Vialle (Red Bull KTM) head into tomorrow’s MXGP of Pietramurata – the penultimate round of the 2020 FIM Motocross World Championship – in pole position to secure the MXGP and MX2 titles.
With two rounds to go – and a maximum of 100 points up for grabs in each class – both Gajser and Vialle lead by 73 and just need to post a couple of steady finishes to be sure of the crowns. In fact, a victory in the opening moto would seal the deal for both of them.
Gajser, MX2 champion in 2015 and MXGP champion in 2016 and 2019, took the series lead from Tony Cairoli (Red Bull KTM) at the MXGP of Lombardia at the end of September. The Slovenian then posted a string of solid performances to pull clear with 12 podium finishes – including seven wins – from the last 14 motos.
Cairoli had led following the premature departure of his team-mate Jeffrey Herlings through injury but the veteran Italian has only won two motos this year and looks destined to fall short in his bid to equal Stefan Everts’ total of 10 world championships.
Jeremy Seewer (Monster Energy Yamaha) still has a very slim mathematical chance of winning the title but everyone else is out of contention. That doesn’t mean the racing is going to be predictable and we saw last time out at the MXGP of Trentino that the twisting, hard-pack circuit can throw up more than a few surprises.
No-one would have put Clement Desalle (Monster Energy Kawasaki) forward as a contender for a moto win last Sunday but the soon-to-be-retired Belgian claimed his first race victory since May 2018 and Gautier Paulin (Monster Energy Yamaha), who’s also retiring at the end of the year, put in one of his strongest performances of the season.
Jorge Prado (Red Bull KTM) is reportedly suffering from COVID-19 complications and isn’t expected to race but former champ Romain Febvre (Monster Energy Kawasaki) has won a moto this season and is definitely capable of winning at least one more.
British interests lie with Adam Sterry (Hitachi KTM fuelled by Milwaukee) along with Russia’s Evgeny Bobryshev (PAR Homes RFX Husqvarna) and REVO-supported Kiwi Dylan Walsh (JM Honda Racing).
In just his second world championship campaign, Vialle – whose father Fred was a GP winner in the ’90s – has shown incredible pace and consistency, taking 12 moto wins and six overalls. A solid third last time out, only a crash or a mechanical problem can keep him from the title.
Jago Geerts (Monster Energy Yamaha) is his closest challenger and the only other rider still in with a chance of winning the championship but, realistically, the 20-year-old Belgian – already assured of second in the series – is extremely unlikely to threaten Vialle.
Holding down third, Maxime Renaux (Yamaha SM Action) has a FIM bronze medal in his sights but can’t back off because Denmark’s Thomas Kjer Olsen (Rockstar Energy Husqvarna), his Aussie team-mate Jed Beaton and Britain’s Ben Watson (Monster Energy Yamaha) have all won motos this year and are all within striking range.
British interests are also represented by Conrad Mewse (Hitachi KTM fuelled by Milwaukee) who sits eighth in the standings, his team-mate Bas Vaessen who’s 15th and 21st-placed Josh Gilbert (PAR Homes RFX Husqvarna).
Here’s the timetable – bear in mind that it’s in Central European Time so an hour ahead of the UK. 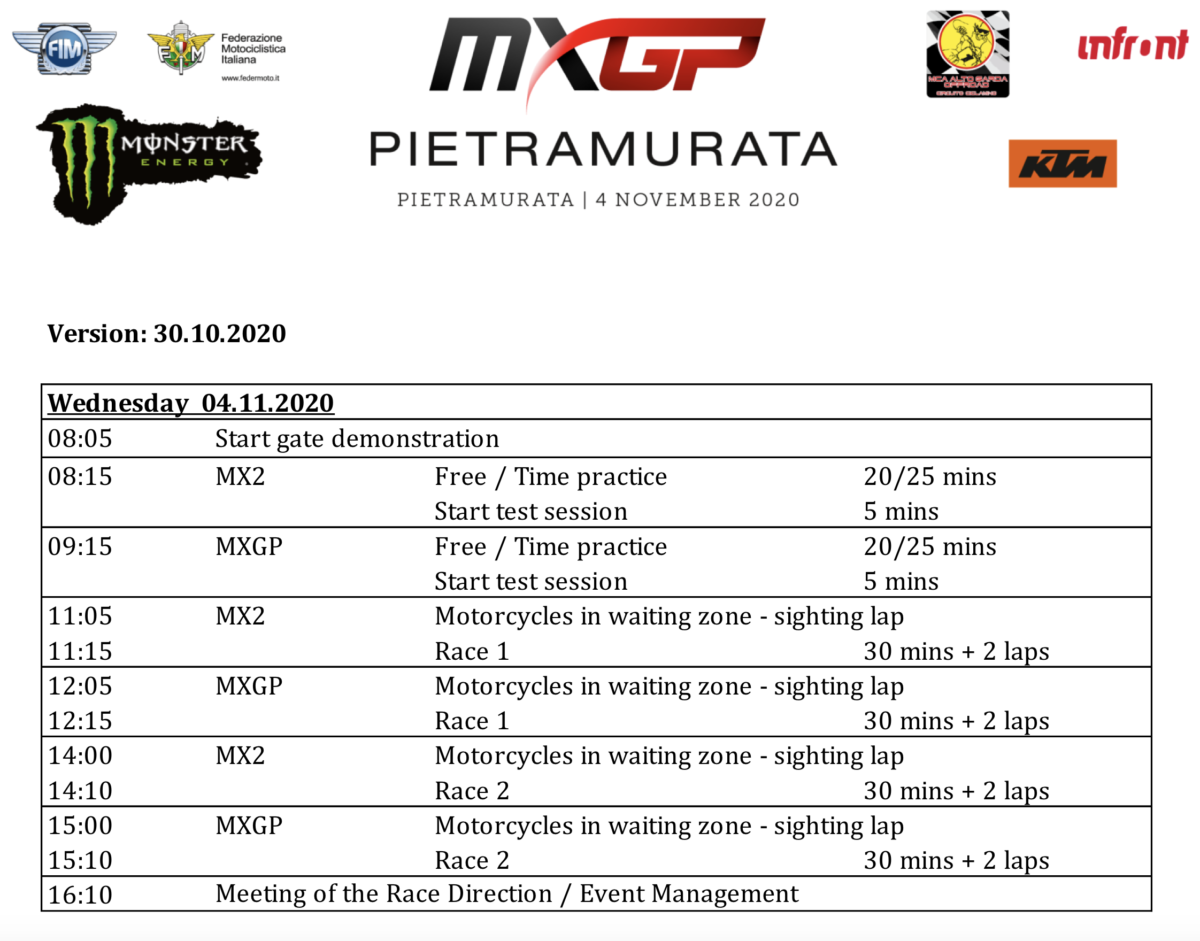