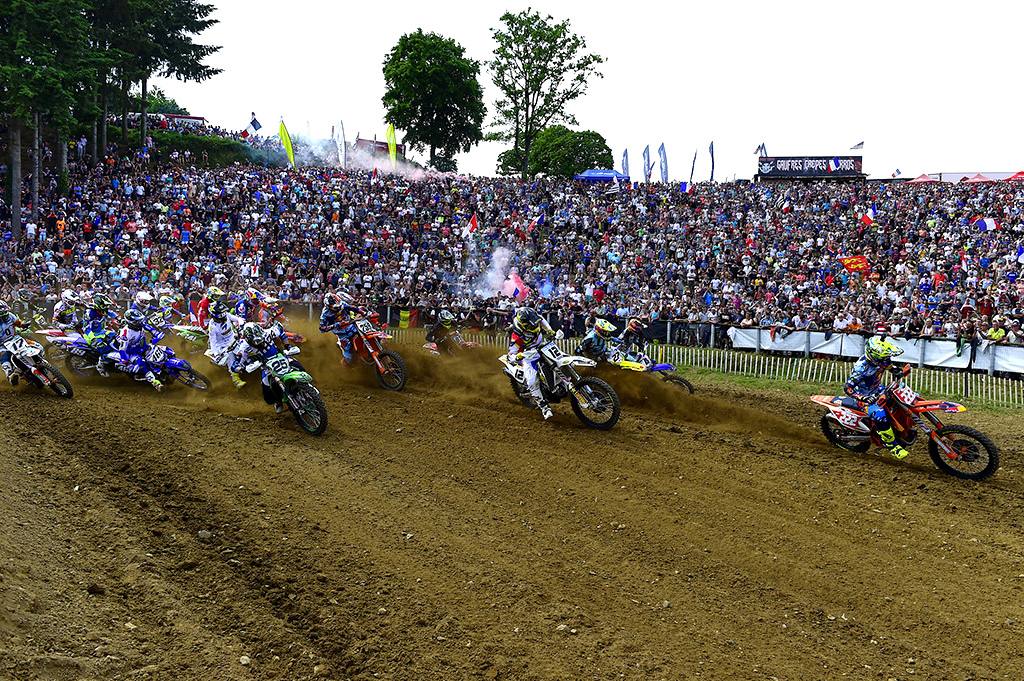 This weekend sees the MXGP circus move to Ernee in France and all eyes will be on last weekend’s Grand Prix winner Maxime Renaux of Monster Yamaha who is heading into his home race as the favourite to win.

Securing his first ever overall victory in the MXGP class is no doubt going to be a big confidence and motivation boost for the Frenchman to put on his best performance in front of his home fans.

In addition, he is also in the title fight with Team HRC’s Tim Gajser who is 66 points ahead of Renaux. Gajser has struggled in the last two GP’s and has failed to make it onto the podium on both occasions.

The French GP will be an opportunity for the Slovenian to get back to winning ways that he showed in the first half of this season and put his illness behind him. For Gajser, it will be the first time that he will race in Ernée since the Monster Energy FIM MXoN in 2015 when he won the B final, as in 2017 he was injured and did not line-up for the Sunday races.

Also needing to make up some valuable points and looking to get back on the box will be Red Bull GasGas Factory Racing’s Jorge Prado who missed out on the top three at the Spanish Grand Prix. Prado was looking strong in both races, running at the sharp end before a couple of mistakes and a crash in race two took him out of the running for the overall victory.

Prado remains fourth in the standings but we’re still at the halfway stage and there is still time for the Spaniard to claw back some points and get back in the title fight.

Both riders now have two podiums each this season and hopefully they can continue in this direction this weekend and deliver another solid result. Coldenhoff was also the qualifying race winner, making it his second this season (Portugal and Spain) and he is clearly showing that he is strong also on the hard-pack tracks.

Looking back at the previous results in 2017, Standing Construct Husqvarna Factory Racing’s Pauls Jonass and Monster Energy Yamaha Factory Racing’s Jeremy Seewer were on the box back when they were fighting for the MX2 title. Jonass won the GP, while Seewer finished third, with Benoit Paturel of Team Ship to Cycle Honda SR Motoblouz separating the pair as he finished second on the podium. Jonass and Seewer have some podiums under their belt this season already and this could be another opportunity for them to get back on the box. Meanwhile, for Paturel this will also be a weekend to deliver strong result!

Other names to look out for this weekend include JT911 KTM Racing’s Jordi Tixier, Riley Racing’s Christophe Charlier and Pierre Moine who will all look to put on their best performance at their home round.

It has been a while since MXGP visited the legendary venue, in fact the last time a Grand Prix race took place in Ernèe was back in 2017 which featured Clement Desalle, Antonio Cairoli and Gautier Paulin on the premiere class podium.

Over the course of the last three decades, Ernèe has hosted MXGP numerous times, the first being in 1990 when American Donny Schmit won the 125cc GP on his Suzuki.

This year big things can be expected from the French Grand Prix, as the ‘Circuit Raymond DEMY’ has always provided some of the biggest races in motocross history, take for example the epic 2015 Monster Energy FIM Motocross of Nations that saw Team France top the podium in front of tens of thousands of passionate French fans who proudly sang the ‘La Marseillaise’, along with the legendary 2003 Grand Prix that saw the ten-time World Champion Stefan Everts become the first ever rider to win the triple crown (winning three classes on the same day).

Alongside the regular MXGP and MX2 action, we will also see rounds of the EMX125 Presented by FMF Racing and EMX250 which are currently led by Fantic Factory Team Maddii’s Cas Valk and Cornelius Toendel.