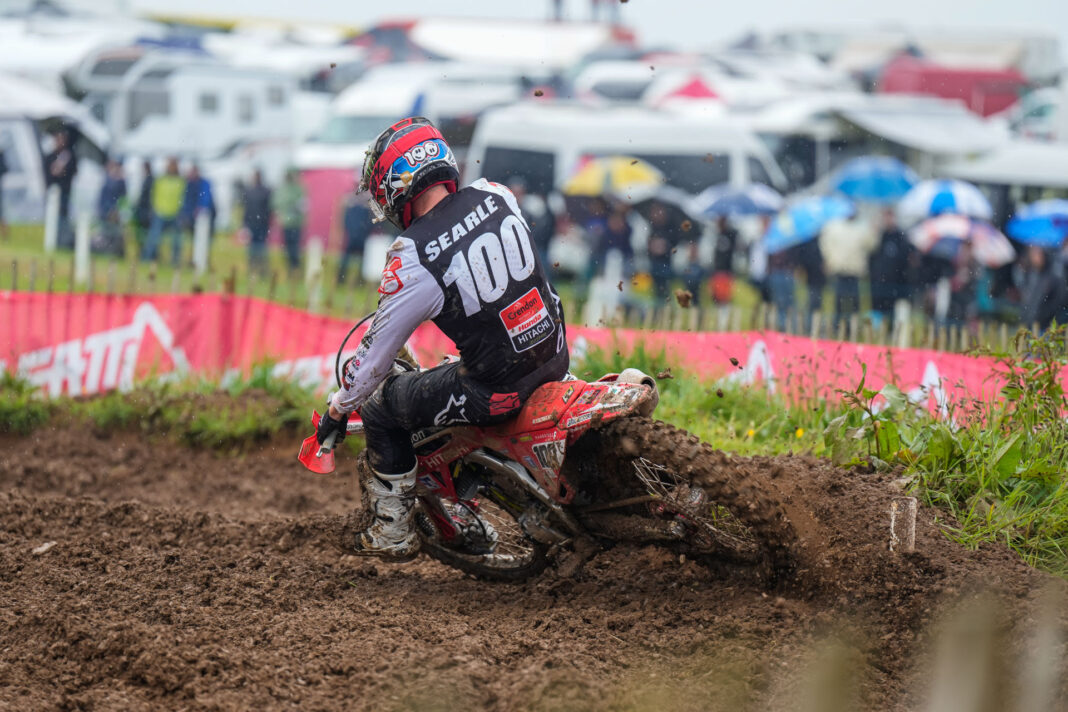 Tommy Searle and his Crendon Fastrack Honda team-mate Jay Hague both took podium finishes in the thrilling second round of the MX Nationals championship at a wet and tough Landrake circuit in Cornwall on Sunday.

British champ Searle was third overall in the MX1 class while Hague – only recently back on the bike after contracting Covid-19 – also finished third in the MX2 category after a dramatic last lap battle to decide the overall honours.

The opening moto of the combined MX1 and MX2 pro classes saw Searle get a rapid start on his Honda CRF450R, rounding the first corner in second place behind Harri Kullas. But he was soon put under pressure by Josh Gilbert, and the pair engaged in a race-long battle which allowed Kullas to pull away. Searle finally outfoxed Gilbert on the final lap to take a well-deserved second place as the constant rainfall made the track very slippery.

In the second moto the soaking wet starting grid caught out many riders including Searle, who didn’t get a great start. He put in a determined charge and worked his way through the pack to fourth place. He was about to mount a challenge for third when a lapped rider swerved sideways on the very greasy face of the finish line jump and Searle took evasive action, heading off the side of the jump. He was lucky to stay on board but his challenge for third was effectively over and he took fourth place. That gave him third overall and he is third in the championship.

“I really enjoyed the track today.” said Searle. “It was really tricky so took some time to get into it. I didn’t want to push too much and make a mistake so had to find my rhythm. In the first race I had a good start and was in the top three then got into second on the last lap which was nice.”

“But in the second race I had a really bad start as I just slipped on the gate with it being slippery and wet. But I pulled my way through and ended up fourth which put my third overall, so a pretty good day.”