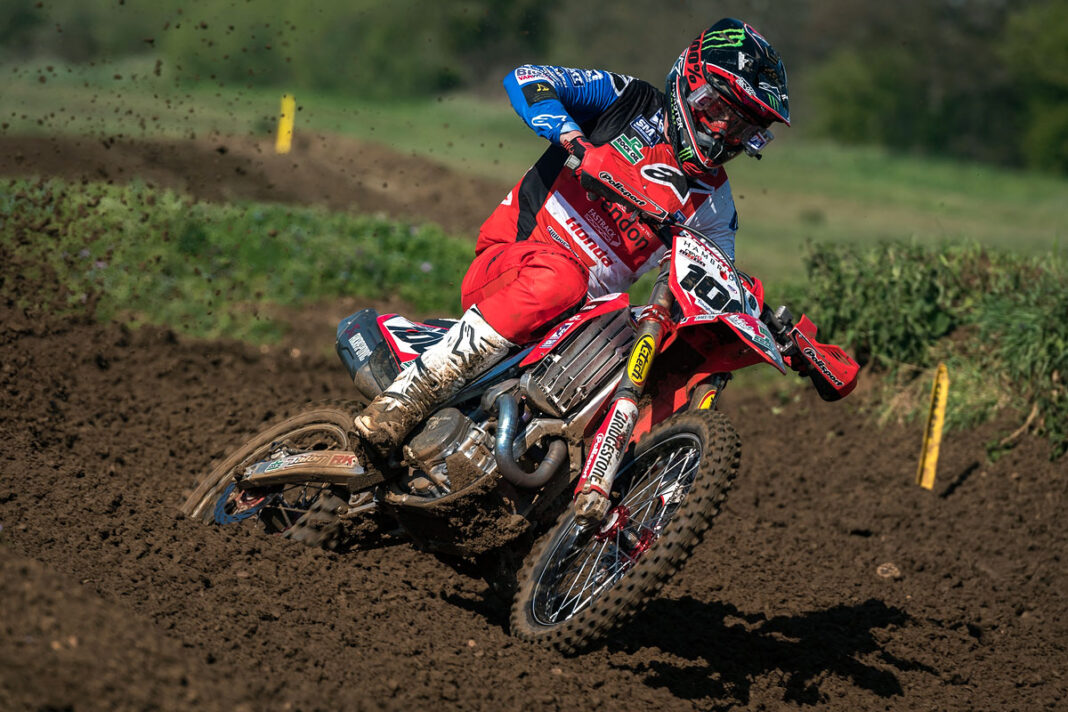 Round three of the Michelin MX Nationals headed to Canada Heights this weekend in Swanley, with a stacked fastest forty line up.

Heading into the Sundays Moto’s at the sunny kent circuit, we saw the Fastest 40 riders in the country line up to tackle the tricky Canada Heights circuit.

Crendon FastTrack Honda’s MX1 rider Tommy Searle grabbed a huge hole-shot in the first moto, just as a huge pile up happened on the first corner where we saw Gabriel KTM’s Liam Knight, ASA united GasGas Stephen Clarke and a mix of other riders hit the deck, which nearly knocked out half of the field.

Tommy then rode a solid race from start to finish, but not without being chased down by the return of Par Homes Husqvarna rider Evgeny Bobryshev who ultimately finished in second, followed by another comeback from the Crendon FastTrack Honda’s Jake Nicholls. Cab Screens Yamaha rider Harri Kullas also had a fantastic ride despite being quite ill on the saturday and being hooked up to a drip, he then brought it home in fourth, followed by Apico Husqvarna Stuart Edmonds rounding up the top five.

You can watch the first corner chaos below:

Verde KTM Jake Millward holeshotted out the gate in the second Fastest 40 moto but is then pushed wide by Searle heading into the first corner, as Bobryshev took over the lead on the second lap, which led to the russian claiming the moto two win.

With the track then chopping up and drying out towards the end of the day, this meant there was quite a few riders just loosing the back ends and sliding out. The Oakleaf 44 Motorsports rider Elliott Banks Browne also had a tough day at the office with mechanical issues, pulling in quite a few times during the second moto.

Despite having a good first moto finishing in ninth, Brad Todd also pulled in mid moto after a crash, as well as RFX KTM’s Nathan Dixon pulled in after damaging his knee.

This then lead to Tommy Searle claiming the MX1 Overall with Gabriel KTM’s John Adamson grabbing a well earned MX2 first overall for the weekend.