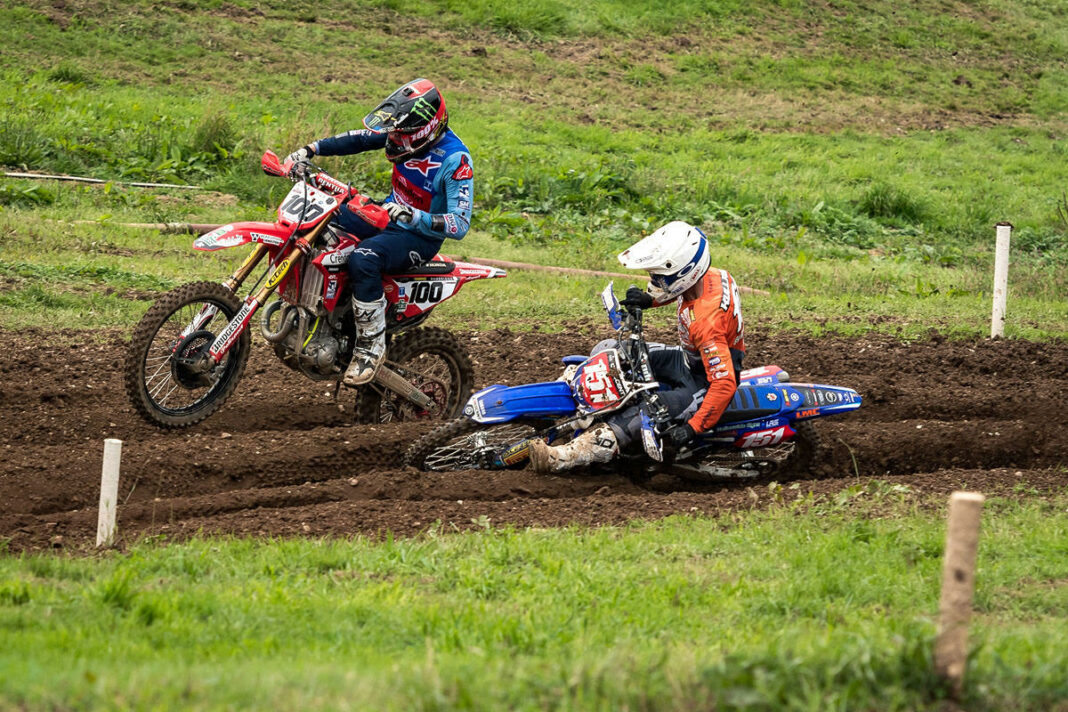 Round four of the Michelin MX Nationals headed to Landrake this weekend, for the penultimate round of the championship series.

All eyes were on Cab Screens Crescent Yamaha rider Harri Kullas but it was Crendon FastTrack Honda’s Tommy Searle shooting out the gate in the first Fastest 40 moto.

Heading back down the hill in the opening moto, we saw Searle, Kullas, OakLeaf 44 Motorsports Elliott Browne Browne and Apico Husqvarna Stuart Edmonds charge towards the first few bends together, as further down the field a pile up on the start with a mix of MX2 and MX1 riders caused a few of the top runners to be way back during the first few laps.

Par Homes Husqvarna and Landrake local Josh Gilbert also had a spot of bad luck, coming off on the whoops section of the track causing him to DNF the first moto completely. Meanwhile Searle, Kullas, Edmonds and Par Homes’ Russian rider Evgeny Bobryshev all pushed away from the middle of the pack, as Searle and Kullas battled right up with two laps to go, when Kullas made the pass to take the race one win.

Edmonds had his best career result so far this season pulling away from Bobryshev to claim third position, followed by Revo Seven Kawasaki Dylan Walsh rounding up the top five.

Heading into moto two we saw Kullas grab another holeshot, just ahead of Edmonds and Searle, as the pack bunched together for final moto of the day. At this point, Kullas had to beat Searle to win the championship, but this was no easy job as he also had Bobryshev charging hard in the top three mix, and had to pass the both of them for the win.

Kullashowever, playing it smart and skillful rode a solid race from start to finish, sealing the deal and claiming the 2021 Fastest 40 championship with one round to go at Landrake.

“I didn’t even know until yesterday evening that we are that close in the points, obviously at the last round I was sick on the saturday, so last night we had a chat and I saw that Tommy was the next guy so I know he will be there, so I needed to be in front of him for both races,” said Kullas, speaking at the track.

“The English tracks need some work you know to make some interesting racing for the pros, to make some different lines and to make the racing interesting as at the moment it’s like following the other one, but anyway I managed to make the pass on Tommy in the first race and he is a good rider in the UK, so it was good to pass him on the hard pack as I prefer the sand.

“I knew that I needed to get the holeshot in the second race to stay away from trouble, the first corner was quite tricky and I had a really great jump out of the gate and I didnt even know who was behind, I saw bobryshev was here and there, I tried to pick some lines from him then I had a small gap. Then Tommy was the next guy, I knew he would be trying to push.”

“I knew I had to fight for the win to get the title with one round to go, it’s so good to have one round left with no pressure, we will still push for the win and go again next weekend, so it doesn’t matter if we need to take any risks.”

You can view all of this weekend’s results HERE.