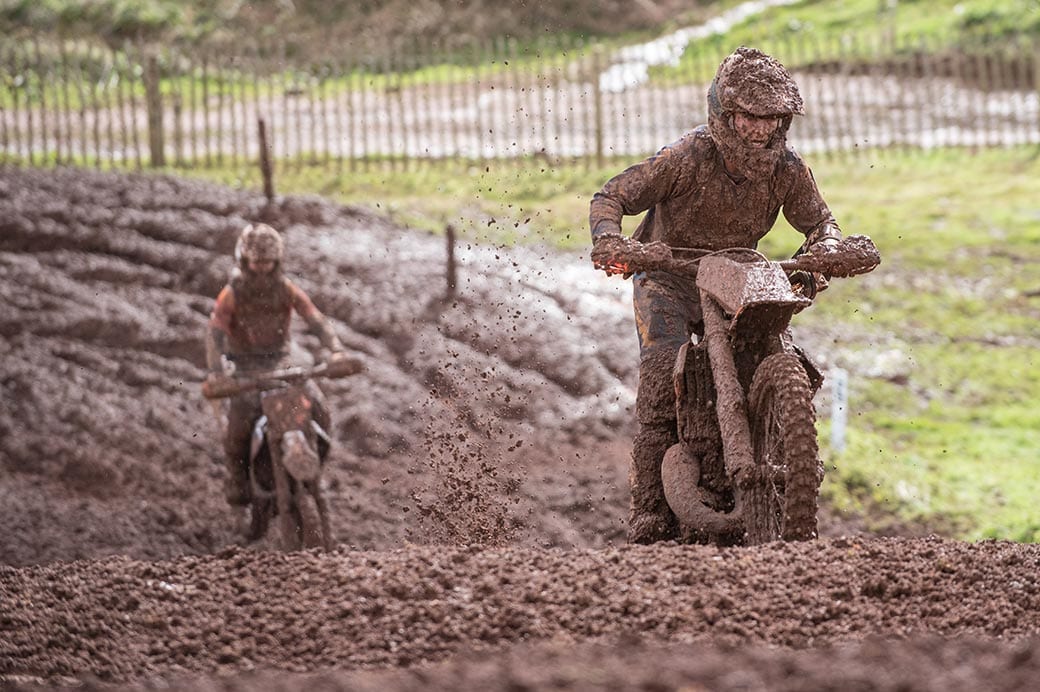 Digging into the Little Silver cancellation – 'It was poor'

The opening round of the ACU British Motocross Championship was supposed to kick off on Sunday at Little Silver in Devon before a last-minute cancellation was announced on the series’ official Facebook page at 6.15pm the day before.
The event was not called off because of Coronavirus – although the second and third rounds at Hawkstone Park and Lyng have been cancelled due to this – but after constant, heavy rain made the venue impassable for riders, fans and medical services.
‘Following meetings with the organisers, race direction, landowner and team managers the decision has been made that due to the weather conditions and forecast for the next 24 hours the racing scheduled for Sunday March 15 has been postponed,’ read the social media statement. ‘Please understand this decision wasn’t taken lightly however the health and safety of riders and spectators is paramount. Please stay tuned for further announcements in the coming days.’
The event, promoted by RHL Activities and the first without former Series Manager Stuart Drummond – who resigned last year – at the helm, was to have launched a series of double-headers featuring the Judd KTM British Youth Championship alongside the Pro classes but there’s a question mark hanging over the wisdom of combining both series in mid-March at the hillside venue that has no permanent hard-standing parking and limited access.
“It was poor,” said Chambers Racing Husqvarna team boss Tim Chambers. “It wouldn’t have been a problem but you can’t run 150 schoolboys and 100 adults from that venue because the paddock’s not big enough. Some venues would work but at the end of the day I would say that it was more important that they ran the Pros and not the kids.”
The Chambers team was to have had all five riders in action for the first time this year. Furthest travelled was Aaron McCarroll who made the journey down from the north of Scotland and was just 40 minutes from the track when he heard of the cancellation.
“Aaron had a 17-hour journey there and back,” continued Tim. “I’d had a blow-out on the M5 so I was 20 minutes behind him. I got down as far as junction 24 and then turned around. Then you’ve got to think of Jay Hague who came down from Newcastle – I think he got home around midnight.
“The solution is better organisation, better communication and better planning. If you’re going to run a seven or eight-round championship you need to have venues that accommodate all the people if you’re going to have all the kids there as well.”
One of the furthest-travelled competitors, Martin Barr (MBR KTM) made it to Little Silver from his home in Northern Ireland before being turned around.
“I’m quite disappointed to be honest,” said Martin. “Obviously, the weather was against them but the ACU had long enough to realise the structure that was needed. The first round with the schoolboys? I think it maybe should have been the second or third round when that should have started. Get the season under way – never mind going to the first round at Little Silver, in a field with no infrastructure, no hard-standing and expect everything to run smoothly, to get everyone in. It’s quite disappointing actually.
“There are plenty of tracks in the UK with hard-standing. Sand tracks that 90 per cent can cope with the weather, never mind going the whole way down to the bottom of England for the first round knowing the weather hasn’t been great all winter. They expect us as a team to put on a show for the spectators – not only on the track but in the paddock – but with no infrastructure it’s hard to do that.”
Martin had to contend with a huge journey to get to Little Silver.
“I left on Friday morning because from the boat at Stranraer it’s 456 miles exactly – that’s an eight-and-a-half-hour drive after a two-hour boat trip. It’s over 10 hours one-way for me. Obviously, I’m a new team and I don’t have a lot of budget and that’s taken a fair chunk out of it when it didn’t need to. That call could have been made well beforehand. I know the weather’s unpredictable – you can’t do anything with Mother Nature – but we’ve been in this game a long time and you pick the tracks at the start of the year that can cope.


“It’s very, very frustrating. I think [without the youth classes] we’d have raced. The paddock was a big issue. A lot of people couldn’t get in. There was only one way in and one way out – it’s a very small lane – and that’s why a lot of people couldn’t get in because they couldn’t block it in case any of the kids crashed and an ambulance needed to get out.
“It’s a tough one for everybody but I think they really need to think hard where they choose to put their events at the start of the year.”
MX2 title contender Josh Gilbert (PAR Homes RFX Husqvarna) was one of the luckier riders, only having to travel from his home in the neighbouring county of Cornwall.
“I feel for the people who had to drive – the Irish and the Scottish – and the people who came from other countries,” said Josh. “As an organiser it’s always tough. You want to put a round on but when it’s circumstances like that… The paddock was so bad. I didn’t actually even get in the field. I was still out on the road when they cancelled it.
“When they first said about Little Silver I didn’t know if the pits would be big enough for the kids and the adults together. I actually walked the track [on] Saturday after the kids and it didn’t look too bad. The ruts would have been deep and tricky and you’d have had to think about it which would have been good.”
Devon-based Buildbase Honda boss Dave Thorpe was another who only faced a short journey.
“Towed in, towed out – it’s never ideal but I’m old-school so I’ve had that all my life,” he said. “I don’t want to be negative because Gareth [Hockey] and his team did an amazing job. The marshals were amazing, the kids were amazing on the Saturday.
“The frustrating thing for me was on Saturday the track I thought rode really well and if there were bigger bikes out there it would have cleared a lot quicker,” he said. “Even if we’d had a little bit of rain on the Saturday night it would have been an amazing event on the Sunday with the big bikes but given the volume of rain we had through Saturday and Sunday I don’t think there are many venues that would have coped with that.
“Wherever you park people – whether it be the British championship riders or the youth and the public – you were always going to have a problem with that volume of rain. Permanent venues like FatCat that have hard-standing, they could have coped with it – but your general tracks where people have to go on fields, I don’t think they could have coped with it.
“It’s a difficult one. I can see what they want to do. They want to spread it around the country to different venues – I understand that. They don’t want to make it a sand championship which we’ve pretty much been for the last few years – I get that too. Another two or three days on it would have been beautiful sunshine and none of us would be having this conversation. If they’d got the weather we got [on Monday] it would have been the most amazing meeting and everyone would have been singing their praises. It’s just unfortunate.
“The writing wasn’t even on the wall during the week because the weather was very nice down here.”
The FatCat Motoparc facility in South Yorkshire – which went ahead with last year’s season-opener despite terrible conditions – ran throughout the weekend without a hitch.
“It was perfect yesterday,” said circuit operator Martin Craven on Monday. “Absolutely perfect. We’ve got good parking, we’ve got a track that deals with water as well as anywhere in the country. If you’re going to have it anywhere, common sense brings you here.”
[more-from heading=”Latest News” category=”news”]
Advertisement