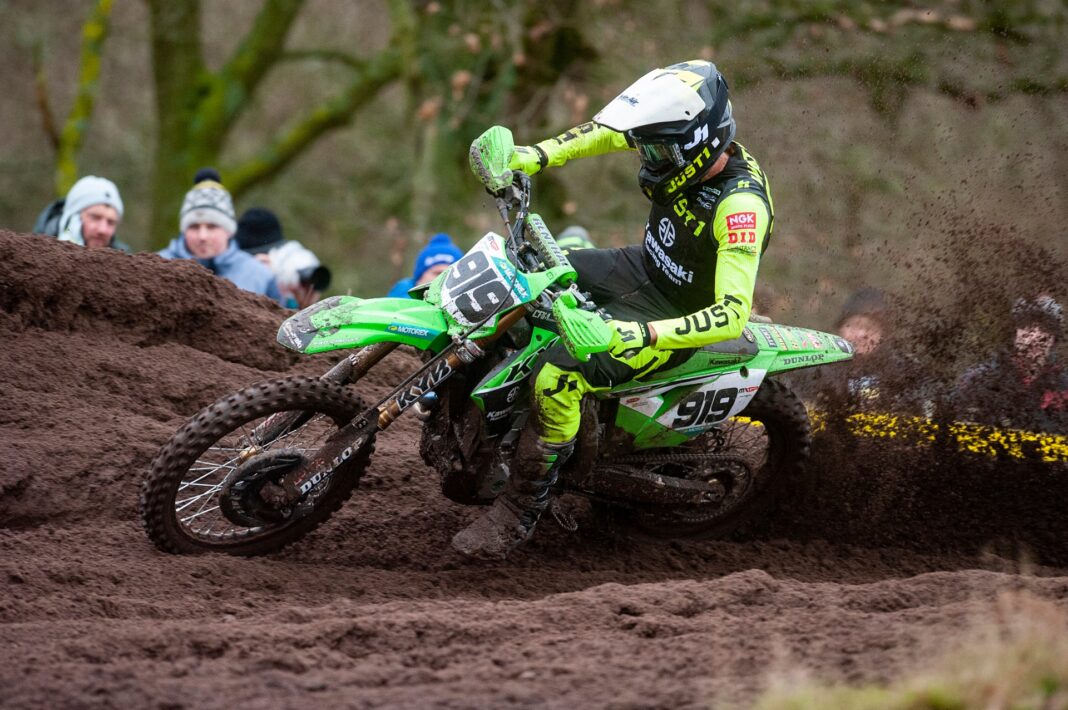 Kawasaki Racing Team MXGP and Ben Watson completed their preparation for the 2022 FIM World MXGP Motocross Championship campaign with a second place and two holeshots at Hawkstone Park in England.

Heavy rain the previous day had left the famous sand track in central England even more demanding than usual and, with just one week to the opening GP, the first priority was to gain further race practice and optimise the starts. Fifth through turn one in the first MX1 moto, the local hero moved forward to third after a couple of laps to close down the leaders but had to discard his goggles after being filled in by the roost off their rear wheels he dropped off the pace to avoid the danger of taking a faceful of sand to his unprotected eyes but, his vision impaired, eventually lost a couple of places through a fall to finish fifth.

Taking a clear holeshot in the second MX1 moto Ben looked comfortable in front, not only for the moto win but also to clinch the overall victory, however a single mistake as the front wheel dug into a sandy berm on the exit from a left-hander pushed him back to fourth. With track conditions at their best for the SuperFinal which ended the day’s racing the Kawasaki rider took his second clear holeshot from three motos, he surrendered the lead mid-moto but maintained pressure to the end to take the chequered flag a close second. The Kawasaki Racing Team MXGP can now head optimistically to the opening round of the MXGP world series at Matterley Basin in southern England next weekend after a highly-productive pre-season.

Ben Watson: “We have three races under our belt now and can look forward to the opening GP next weekend. I feel we have made progress each week, particularly with the starts, I’ve been riding a little tight in the first moto each week with arm pump, but that was a lot better today and I ended up the day on a high note. “

Antti Pyrhönen, KRT team manager: “The day was really positive. It was a tough schedule today with just forty minutes between motos and the entire team was working on a really high level. Ben was progressing throughout the day; he was leading the second moto until he made a small mistake and ended the day with a really good SuperFinal. It was super positive that we took two holeshots today. We have experienced all conditions in the three races so far – a dry race on Sardinia, hardpack in France and today really deep sand, muddy and lots of ruts – so we can say that we did everything we could during this pre-season to be prepared for the first GP and we are now looking forward to Matterley. “