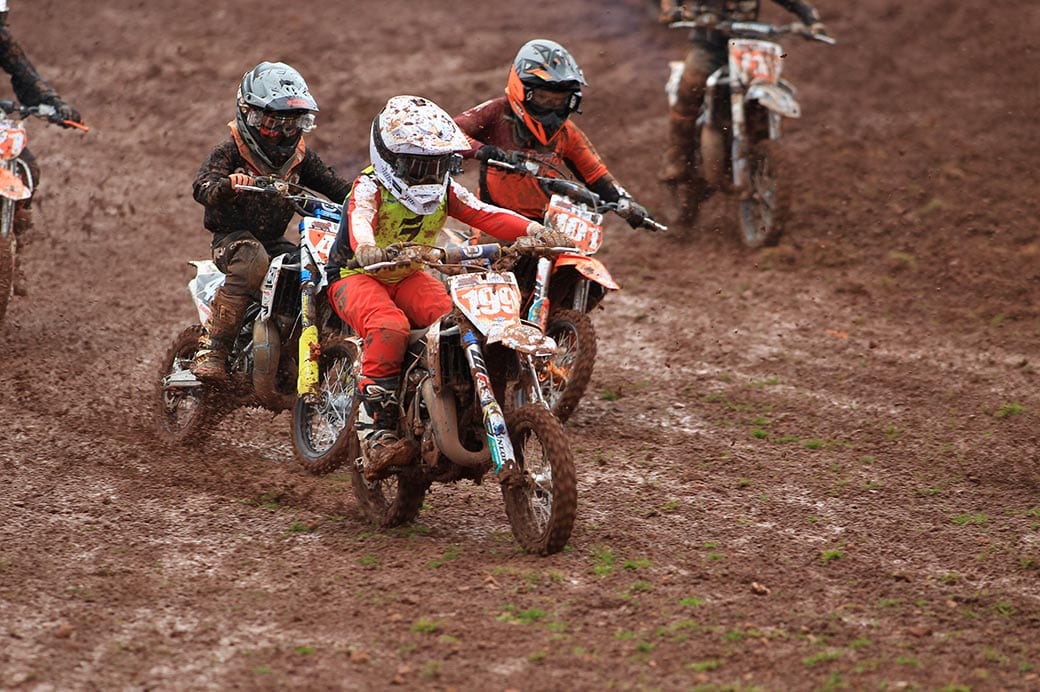 After a long winter off-season, it was time for the SJP Moto Husqvarna Youth Squad to travel to Little Silver near Exeter for the opening round of the ACU Judd KTM British Youth Championship for 2020.
Following weeks of rain in the area, the track created challenging conditions for all the riders as they looked to start their season in fine style.
With the practice and qualifying out of the way it was time for the racing to start, but due to the delayed start and track conditions, it was decided to run just two races for each class.

Jayden Jones and Stanley Siebert went into the 65cc race as Rookies but that didn’t stop Jones from taking a fantastic race win, while Siebert was riding well but a mistake saw him finish in 29th place.
The second moto saw Jayden Jones take another great race win to make it two out of two, while Siebert rode well and had a good pace, but another mistake saw him finish 32nd.

In the Small Wheel 85cc class Billy Askew, Reece Jones and Lucy Barker were all competing in the class. The opening moto for the Small Wheels saw Askew take a strong race win by nearly a minute over second place and the fastest lap of the race, while Reece Jones finished a fantastic fourth in his first race in the class. Female rider Lucy Barker had a good ride to finish 20th.
The second moto again saw Askew take the race win with Jones claiming another fourth-place finish. Lucy rode strongly in the second race to secure 16th place at the finish.

Next up was the Big Wheel 85cc class with defending champion Charlie Heyman looking to retain his crown, alongside Charlie in the class was Hudson Roper, Finley Evans and James Barker.
In the opening race Charlie opened the season in fine style with a race win, Roper rode well to finish 11th with Barker 16th and Evans in 27th. The second race saw Heyman make another good start to take a start to finish race win. Behind Heyman was James Barker in fifth and Evans in 12th ahead of Roper in 14th.

The MXY2 (125/250) class saw Jayden Haigh move up to the 125cc machine over the winter after just a year in the 85cc Championship. Haigh made good progress in the opening race after a bad start, but unfortunately due to a crash, Jayden failed to finish. In the second race saw Jayden rode well to finish 23rd and 15th in the 125cc class.
After the racing, a meeting was held regarding the remainder of the Youth timetable and the Adult British Championship due to take place the following day. After the meeting, the decision was taken to cancel the rest of the event due to the overnight forecast, and the health and safety of all people at the venue due to the condition of the paddock areas.
The decision meant that the team now leads the 65cc, Small Wheel 85cc and Big Wheel 85cc going into the second round.
Team Manager, Leighton Haigh: “It was a tough weekend for all and definitely one that you could become victim to massive variables with weather and the trickiest track conditions that I’ve seen in a long time.
“The whole team dug deep and some of the guys didn’t get the results they deserved but to be leaving round one as a team leading three British championships is a credit to the class of our riders and the team effort as a whole on and off the track.”
[more-from heading=”Latest News” category=”news”]