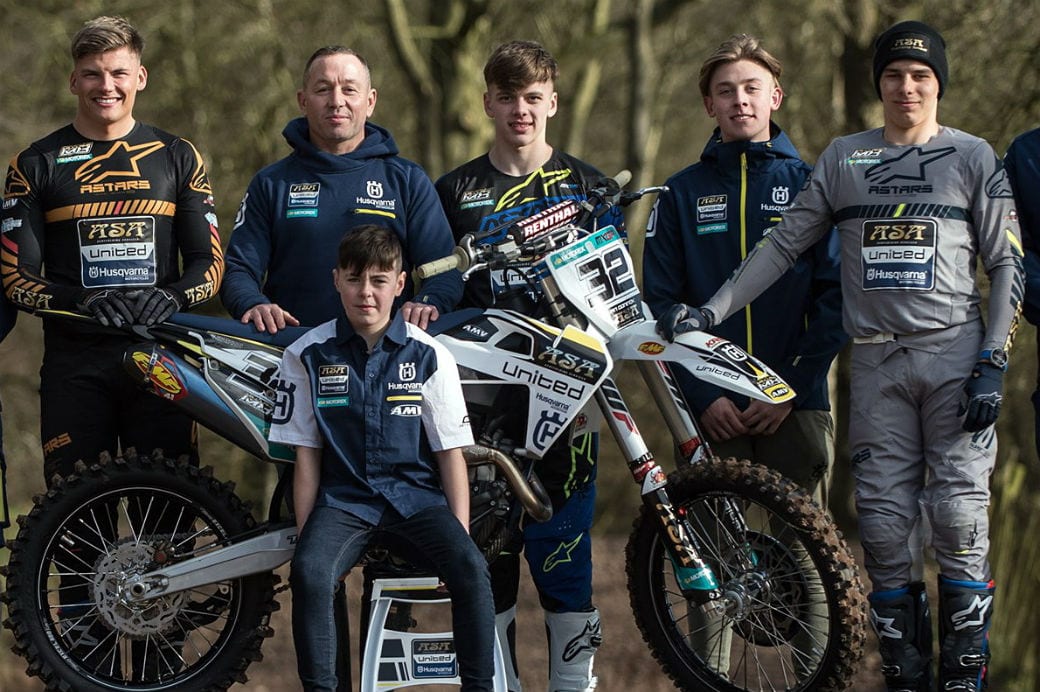 For the future of the sport, it’s good to see more and more British MX Championship teams having top British youth talent under the awning.
This week we feature, ASA United Husqvarna, as they take on rising star Bobby Bruce from Kent, along with 11-year-old Irish prospect Cole McCullough.
At the recent Hawkstone Park International, Bruce certainly caught the eye in EMX 125s posting the best time in qualification.
He went 5-4 and was desperately unlucky not to make the podium as he grabbed the holeshot in race two, only to be temporarily halted and knocked back by the ultra wet conditions.
As for his 2020 season, BB#579 has firm ambitions where European competition is concerned and a definite focus on home territory.
“I want to win the MX Nationals this year,” said Bruce in an interview with Toofast Media.
“I’ve finished on the podium every year so far and I really want that championship and also want to run up front in the European championship.
“I like the TC 125, it’s got a lot of power and it handles well. I jumped on it at the beginning of January and I’m enjoying it.
“It’s really good being a part of ASA United Husqvarna with team manager Lee Tolan and being under the awning with brilliant riders like Brent Van Donnick and Jorgen-Matthias Talviku (JMT). It gives you that extra bit of confidence, it’s just great to be with such a good team.”
While Bruce has his eyes set on two specific targets, starting next weekend (EMX 125) at Matterley Basin, Irishman McCullough goes to the line in the Michelin MX Nationals and the British Youth Championships, along with selected Irish series and EMX 85cc rounds.
“I just want to go out there and enjoy myself, ride the best I can and achieve good finishes,” said McCullough.
“I’ve been riding Husqvarna for four years now and the thing I like about the bike is that it’s easy to handle and a fun ride.
“With Lee helping me, ASA United Husqvarna has brought me on really well and I’m so happy to be with them this year.”
Lee Tolan explained what keeps him driven as team manager: “Just taking on riders, seeing them progress and being a part of their journey and to see them move onto the GP scene.
“Also seeing the young ones come through, giving them a leg up to help them achieve their goals.
“There are a lot of kids coming through who don’t have a stepping stone and it’s hard to take these kids on sometimes.
“But people are missing the point here because if we don’t give these guys a platform to get used to the environment how are we going to produce these kids for our sport in the future?
“It’s important to me to have a good MX1 and MX2 rider, but it’s also important to think about the kids.
“This year I’ve taken on Cole McCullough, he needs an opportunity and along with him is Bobby Bruce, a 125cc rider with potential.
“I need to step up for these kids, because this is what the sport is all about, to give them a platform to get to the GPs.
“I feel I have an obligation to do this because if we don’t the sport is dead.”
[more-from heading=”More Motocross” category=”motocross”]