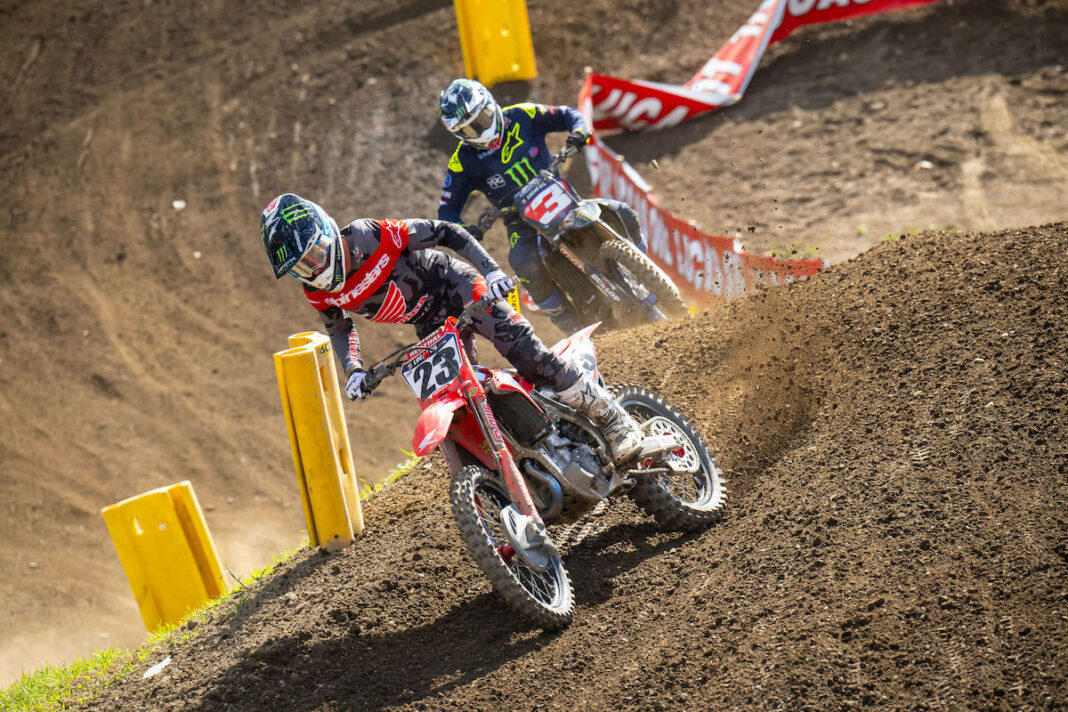 HRC’s Chase Sexton was able to reclaim the lead of the Lucas Oil Pro MX 450 point standings with a dominant 1-1 sweep of the motos at Unadilla.

The weekend kicked off the stretch run of the series’ 50th anniversary season with an annual visit to one of the sport’s most hallowed grounds at Central New York’s Unadilla MX. The Parts Unlimited Unadilla National signified the ninth round of the 2022 season and featured one of the summer’s toughest challenges with a rough and highly technical track.

The opening moto in the premier class saw a new, yet familiar face at the head of the pack to start as defending champion and Monster Energy Star Yamaha Racing rider Dylan Ferrandis stormed to the MotoSport.com Holeshot in his first gate drop of the season. He was followed by Monster Energy Kawasaki’s Jason Anderson and Team Honda HRC’s Ken Roczen.

The German then went on the charge and made the pass on Anderson for second. He continued to push and grabbed control of the lead from Ferrandis before the completion of the first lap. A small miscue by Anderson caused him to lose third to point leader and Monster Energy Star Yamaha Racing rider Eli Tomac.

A determined Tomac got around his teammate to move into second and then looked to chase down Roczen for the lead. The Yamaha rider showed patience and waited for his opening, then made a successful pass on his longtime rival in his first attempt. Behind them, Anderson made the move on Ferrandis for third and brought Sexton along with him for fourth.

Tomac stabilized his lead to nearly three seconds over Roczen as the moto passed the halfway point. This is also when Sexton was able to make his move on Anderson for third. The Honda rider’s charge didn’t stop there as he then made quick work of his teammate Roczen for second not long after. Sexton continued to post the fastest laps on the track to chip away at Tomac’s lead.

As the battle for the lead started to heat up, Roczen continued to lose positions, giving up his hold of third to Anderson and fourth to Ferrandis. Back up front, Sexton successfully eliminated his deficit and passed Tomac with ease with about seven minutes left in the moto.

With the lead in hand, Sexton ran away from the field and went unchallenged the rest of the way. He easily claimed his fifth moto win of the season by 12.8 seconds over Tomac, in what was arguably the Honda rider’s most impressive single moto of the season. Anderson followed in third while Ferrandis parlayed his holeshot into a fourth-place result. Red Bull KTM Factory Racing’s Ryan Dungey crossed the line in fifth, but received a one-spot penalty for jumping on a red cross flag, which moved Roczen into fifth and Dungey sixth

The second and deciding moto got underway with Tomac leading the way for the MotoSport.com Holeshot, followed by Red Bull KTM Factory Racing’s Aaron Plessinger, Troy Lee Designs/Red Bull/GASGAS Factory Racing’s Justin Barcia, and Sexton. As Tomac looked to establish an early lead Sexton made the pass on Barcia for third and looked to continue moving forward, soon making the pass on Plessinger for second to start the second lap.

With the championship leaders out front all attention shifted to Sexton’s pursuit of Tomac. They settled in through the opening 10 minutes of the moto until Sexton decided to drop the hammer and go on the attack. He quickly erased his deficit to the lead and made a quick move that appeared to catch Tomac off guard and allowed Sexton to make an easy pass for the top spot. Moments later, Anderson made the pass on Plessinger for third after several laps of pressure.

Sexton quickly built a lead of almost two seconds but was unable to check out on Tomac, who stalked the lead and studied his rival’s lines. The leaders traded fast throughout the middle portion of the moto before Sexton inched away as they approached lapped riders. The lead continued to build from there and soon surpassed 10 seconds.

The Honda rider put it on cruise control in the closing stages to take the moto win by 15.8 seconds over Tomac. Anderson finished in a distant third.

Sexton’s second 1-1 sweep of the summer brought him his third victory of the season and his second in a row. It’s the fifth win of his career. Tomac (2-2) settled for the runner-up spot, while Anderson (3-3) completed the overall podium.

The winning effort vaulted Sexton back atop the championship standings, where he reclaimed his hold of the red plate with a one-point edge over Tomac with three rounds and six motos remaining. Anderson further strengthened his hold of third, 84 points out of the lead.

“It was an awesome day. I struggled this morning in qualifying but we made some bike changes that worked out really well,” said Sexton.

“This track really suited my style and I just couldn’t be happier with how the day went. I’m having an awesome summer and I’m so happy on my bike. I just want this to keep going.”