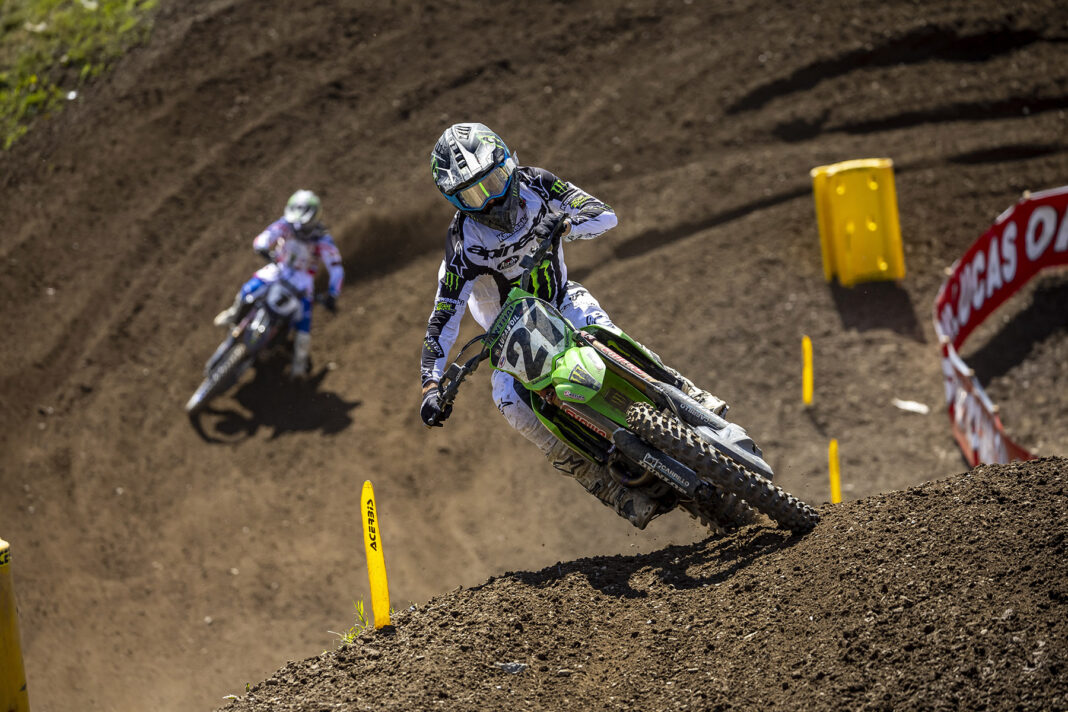 The first moto in the 450 Class began with Team Honda HRC’s Ken Roczen leading the way for the MotoSport.com Holeshot with Red Bull KTM Factory Racing’s Ryan Dungey in tow, followed by Monster Energy Star Yamaha Racing’s Eli Tomac and Team Honda HRC’s Chase Sexton, the two championship leaders. Sexton then crashed and dropped deep in the field. He encountered even more misfortune on the following lap when he was caught up in another rider’s incident.

Sexton’s hard luck provided an opening for Tomac, who made the pass on Dungey for second and pressured Roczen for the lead. Tomac bided his time and made the pass happen seven minutes into the moto as Sexton looked to fight his way back into the top 20 in the running order.

Tomac slowly added to his lead through the middle portion of the moto and moved out to more than five seconds clear of Roczen, who asserted his hold on second. Dungey maintained third for most of the moto but was forced to do battle with Anderson as the moto reached its final 10 minutes. Anderson went on the attack at his first opportunity and made the pass for the position.

Anderson’s march forward didn’t end there. He closed in on Roczen just a couple laps later and made an easy pass for second inside the final five minutes of the moto. From there the battle for third came down to Roczen and Dungey as the two longtime rivals gave chase to one another throughout the closing minutes of the moto.

Tomac was in a class of his own out front and charged to his 11th moto win of the season by 12.1 seconds over Anderson, while Roczen held off Dungey for third. Monster Energy Star Yamaha Racing’s Christian Craig rounded out the top five. Sexton fought back to finish seventh.

The final moto of the day saw Monster Energy Kawasaki’s Joey Savatgy charge to the MotoSport.com Holeshot only to be quickly passed by Dungey as Roczen followed through into second. A little further back Sexton started in sixth while Tomac found himself just outside the top 10 in 13th place. Back up front, Dungey and Roczen duked it out for control of the moto. Roczen appeared to make the pass, but Dungey countered and reaffirmed his hold on the spot.

A persistent Roczen didn’t relent and was able to make the pass five minutes into the moto, which left Dungey to fend off Anderson, who soon moved into second and dropped Dungey to third. Sexton lurked in fourth, while Tomac fought his way up to seventh. Back up front, Anderson closed onto the rear fender of Roczen and made quick work to take control of the lead nine minutes into the moto, while Sexton passed Dungey for third.

Anderson continued to build on his lead as Roczen came under fire from Sexton and lost his hold of second, as Tomac remained stuck in seventh. Sexton’s pursuit of the lead continued as he started to inch on Anderson at the halfway point of the moto. The Honda rider continued to chip away and got close enough to mount an attack, surging around the Kawasaki and into the lead. Unfortunately, Sexton crashed and gave up control of the moto, remounting in third with just over 10 minutes to go.

Anderson reclaimed the lead and Roczen moved up into second, but Anderson briefly stalled and dropped from first to third, which moved Roczen back out front and Sexton up into second. Not long after that Sexton made another pass on his teammate to retake control of the top spot. That left the battle for the overall between Roczen and Anderson as they fought for second. Anderson amped up his aggression and went on the attack and made his way past to move into the runner-up spot. Further back, Tomac was slowly moving forward and methodically worked his way into fifth in the waning minutes.

Sexton overcame the earlier misfortune to grab his seventh moto win by 4.2 seconds over Anderson, with Roczen third, Dungey fourth and Tomac fifth.

As the most consistent rider of the afternoon Anderson emerged with his second overall win of the season (2-2) and the second victory of his career, as Tomac finished in second (1-5) for his ninth consecutive podium result. Roczen completed the overall podium in third (3-3), his first since taking the win at the third round.

Tomac reclaimed possession of the point lead one week after losing it to his rival, while Sexton missed out on the overall podium for the first time in fourth (7-1). A total of two points changed hands between the two riders, with a single point now separating them with two rounds and four motos to go.

“Today, two plus two equals one. I’ll take it [the win] any way I can get it. I said we’re making progress and this proves it. I’ve always liked Budds Creek and it feels really good to get the job done today. Let’s keep it going and see if we can finish the season strong,” said Anderson.