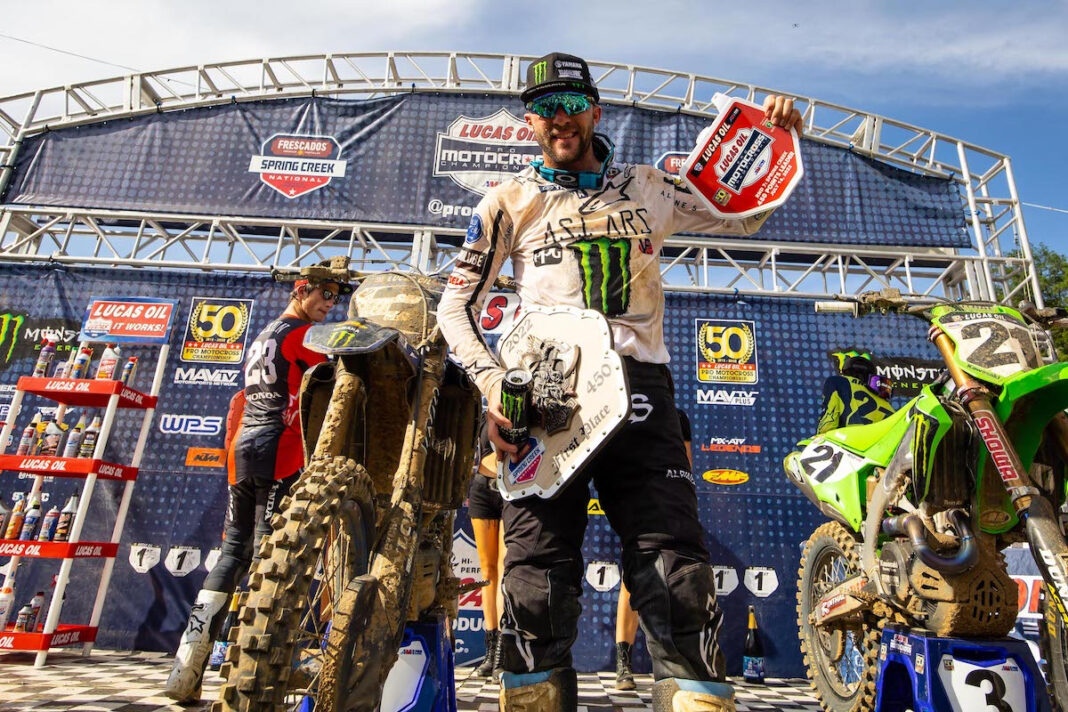 Lucas Oil Pro Motocross kicked off its second half of the summer season from Minnesota’s famed Spring Creek MX Park.

The Frescados Tortillas National featured one of the most dynamic racetracks in American motocross and it provided a compelling afternoon of competition that saw Monster Star Yamaha Racing’s Eli Tomac storm to his fourth straight 450 Class victory following another 1-1 moto sweep that moved him atop the point standings.

The 450 Class frontrunners of Tomac and Team Honda HRC’s Chase Sexton emerged at the head of the pack to start the opening moto, but it was Monster Energy Kawasaki’s Joey Savatgy who came away with the MotoSport.com Holeshot, only to lose the lead to Tomac. A brief battle for third between Sexton and Red Bull KTM Factory Racing’s Ryan Dungey saw the Honda rider secure the position and go on the attack for second. Savatgy went down and dropped outside the top 10, which moved Sexton into second, Monster Energy Kawasaki’s Jason Anderson into third, and Dungey into fourth.

A showdown between the top two riders in the division took shape, as Sexton started to close the gap. Tomac responded and stabilized the lead as the moto reached its halfway point. Fifteen minutes into the moto Sexton went on the attack and pulled the trigger to make the pass for the lead as they navigated one of the track’s steep downhill sections. Tomac responded and got alongside Sexton, but the Honda rider countered to establish his hold on the spot. Sexton then sprinted out to a multi-second lead.

Sexton appeared to have the moto in control but missed a rut on one of the track’s downhills and went down, which handed the lead back to Tomac with less than 10 minutes to go. Sexton was able to remount in second but faced an insurmountable deficit. Tomac carried on to his sixth consecutive moto win with a margin of 14.4 seconds over Sexton. Anderson followed in third, with Dungey fourth and Monster Energy Star Yamaha Racing’s Christian Craig in fifth.

The second 450 Class moto started with Savatgy once again leading the way for the MotoSport.com Holeshot, with Sexton and Team Honda HRC’s Ken Roczen in hot pursuit as Tomac followed from fourth. Sexton went on the attack immediately and fought his way into the lead before the completion of the opening lap as Roczen soon followed into second. Tomac then aggressively made his way into third and set his sights on the Hondas.

Tomac stalked Roczen for a lap and made an impressive move to take control of second. Less than two seconds separated the lead pair but Tomac made quick work to erase that deficit and soon applied heavy pressure on Sexton. A relentless Tomac made an impressive move to take the lead away from his rival and looked to check out with a blistering lap. While Tomac’s pace was unmatched, Sexton was able to keep him honest and kept the Yamaha within striking distance. This allowed both riders to pull away from the rest of the field.

Behind the leaders the battle for third heated up between Roczen and Craig. The Yamaha rider was patient and took advantage of his first opportunity to claim the position and moved into a podium spot. Roczen then lost his hold of fourth to Anderson, who then looked to track down Craig for third.

As the moto entered its final five minutes the gap between Tomac and Sexton hovered around a second, with swings in momentum favoring one rider or another as they worked through lapped traffic. As the clock ran out on the moto both riders let it all hang out for the final two laps. Sexton closed in as the final lap began, but Tomac didn’t put a wheel wrong and inched away in the final corners to wrap up his seventh straight moto win by 1.7 seconds. Craig finished in a distant third.
Overall
Tomac’s midseason run of dominance continued with his third consecutive 1-1 performance, which resulted in his fourth straight overall win and the 31st victory of his career. Sexton’s unblemished podium streak continued with his seventh in a row for the runner-up spot (2-2), while Anderson earned his third podium result of the season in third (3-4).

Tomac’s streak allowed him to take control of the championship point lead for the first time in 2022, where he now has a five-point lead over Sexton. Anderson’s podium finish allowed him to move into third in the standings, 72 points out of the lead.

“That was crazy, running at that pace the whole time [in Moto 2]. I had my work cut out for me off the start and had to make some passes,” said Tomac.

“I was able to get by Chase [Sexton] early and that was huge. We made some changes to the bike in the second moto that really helped and allowed me to put the bike where I wanted.”