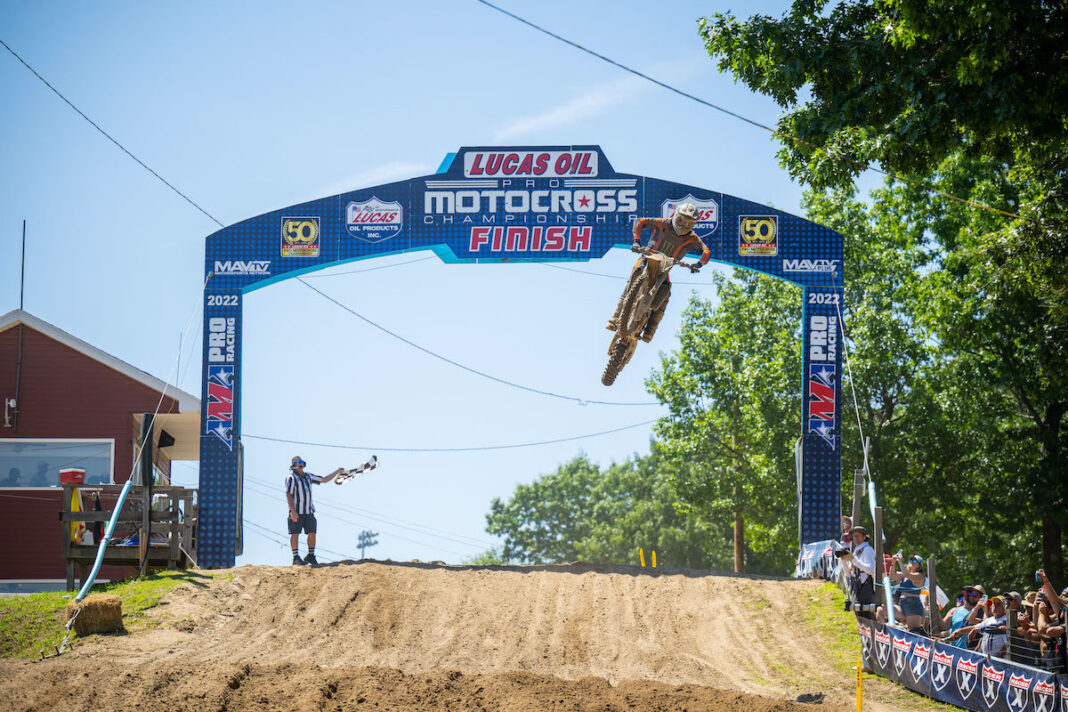 Monster Yamaha’s Eli Tomac took his third Lucas Oils Pro Motocross win in a row at Southwick, with a dominant sweep of the 450 class motos.

The first 450 Class moto of the afternoon got underway with a convincing MotoSport.com Holeshot by Team Honda HRC’s Ken Roczen, followed by Red Bull KTM Factory Racing’s Ryan Dungey and Monster Energy Star Yamaha Racing’s Christian Craig. As Roczen sprinted out to a quick lead of more than a second, Craig made the pass on Dungey for second while Team Honda HRC’s Chase Sexton, the point leader, followed in fourth.

Craig started to chip away at his deficit to Roczen and successfully made a pass for the lead a little more than five minutes into the moto. As Dungey looked to apply pressure on Roczen for second the KTM rider went down, but quickly remounted. However, he fell from third to fifth, which moved Sexton up to third and Tomac into fourth after running as far back as eighth.

As the moto reached its halfway point Craig maintained a lead of nearly two seconds, but it was Tomac who started to attract the attention as the fastest rider on the track. He made an easy pass on Sexton for third and put in a charge on Roczen to take control of second. A little more than a second separated the Yamaha teammates of Craig and Tomac with 14 minutes to go in the moto. It took just a lap for Tomac to seize control of the lead. Behind them, Sexton got by Roczen for third.

Once out front Tomac opened up an advantage of nearly four seconds on the field, while Craig and Sexton engaged in a fight for second. These two riders traded momentum for many laps, but Sexton’s patience paid off in the closing minutes of the moto when he pulled the trigger on a pass and made it stick.

It was clear sailing for Tomac the rest of the way as he cruised to his fourth consecutive moto win by 7.3 seconds over Sexton, with Craig in third. Dungey followed in fourth, while Fire Power Honda’s Max Anstie rounded out the top five with a last-lap pass on Roczen.

The deciding 450 Class moto began similarly to the first moto with Roczen at the head of the pack for a sweep of the MotoSport.com Holeshots. Craig slotted into second, while Red Bull KTM Factory Racing’s Aaron Plessinger followed in third. Tomac started inside the top five, while Sexton emerged deep in the top 10.

As Roczen sprinted out to an early multi-second lead, Craig and Plessinger engaged in a battle for second, from which Plessinger prevailed with the position. A battle for third then unfolded between teammates Craig and Tomac. After the two riders came together, with each avoiding a crash, Tomac reset and made the pass happen.

Roczen, Plessinger and Tomac asserted themselves at the head of the field, which allowed the lead trio to open a huge gap. A showdown soon followed as the moto passed the halfway point. Tomac dropped the hammer and made the pass on Plessinger for second and didn’t let up in his pursuit of Roczen. In less than a lap Tomac moved from third to first and took control of the moto with a little more than 12 minutes to go. As Tomac pulled away, Plessinger went on the attack and took second from Roczen.

As Tomac checked out on the field the attention shifted to Sexton in his effort to fight his way onto the podium. The point leader showed tremendous patience from fourth and bided his time. Soon enough he was within striking distance of Roczen and successfully took control of third. He then moved to within a few bike lengths of Plessinger and with just two laps to go he made the pass for second.

Tomac was in a class of his own out front and capped off a dominant afternoon with his fifth straight moto win by 10 seconds over Sexton. Plessinger earned his best moto result of the season in third.
Overall
Tomac’s second consecutive 1-1 sweep resulted in a third straight overall victory and the landmark 30th win of his 450 Class career. Sexton continued his podium streak in second (2-2), while Plessinger’s strong second moto landed him on the overall podium for the first time this season in third (7-3).

While Tomac gained even more ground in the championship battle, Sexton’s runner-up effort allowed him to maintain his hold of the point lead. A single point now separates the riders halfway through the 12-round season. Roczen, who finished fourth (6-4), is third, 41 points out of the lead.

“We’re just doing what we can. This is a gnarly points race and neither of us [Chase Sexton and I] have made a mistake yet or blinked. We’re both riding really strong. I just got better starts today,” said Tomac.

“This track is so difficult. It just takes everything out of you. I’m done [physically], but it makes winning here that much more satisfying.”