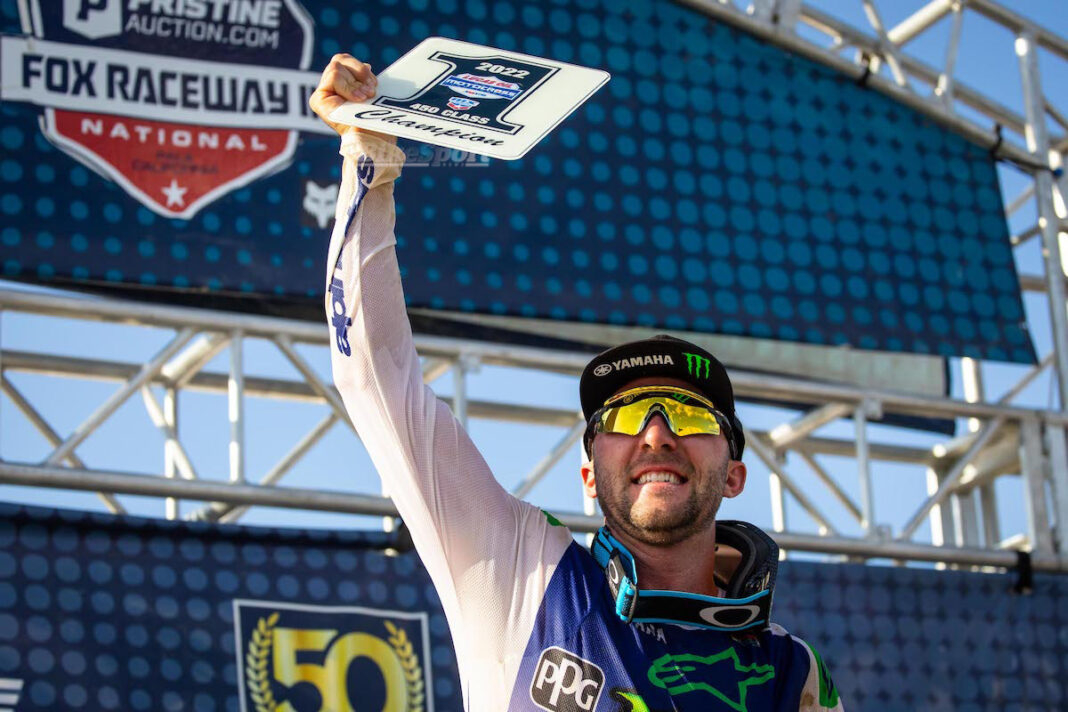 After a titanic season-long tussle, Monster Yamaha’s Eli Tomac got the better of Chase Sexton at the Lucas Oil Pro Motocross finals at Fox Raceway to take his fourth title.

The weekend culminated with another memorable battle, from which Tomac prevailed following a 1-1 effort, to hoist the Edison Dye Cup for the first time since 2019.

Extreme heat protocols were implemented for the races, which shortened each moto in both classes to 25 minutes plus two laps. As the field stormed out the gate to open 450 Class Moto 1 it was Sexton and Tomac at the front, with Sexton grabbing the MotoSport.com Holeshot. The championship rivals set a torrid pace early and easily sprinted away from the field.

The pair traded fast laps as the gap between them ebbed and flowed through various parts of the track, where both riders appeared to have strengths in different sections. Sexton and Tomac opened an advantage of nearly half a minute on the field as the moto reached its halfway point, while the distance between them hovered around a second.

Lapped riders brought the rivals closer together entering the final five minutes and it opened the door for Tomac to take advantage. The Yamaha rider seized the moment and went on the attack to make the pass. Tomac then dropped the hammer and opened a gap of two seconds with three minutes to go.

As they took the two-lap board just 1.5 seconds separated Tomac and Sexton, but a bobble from Sexton allowed Tomac to establish the largest lead of the moto at its most critical juncture. Sexton battled back and closed in, but it was too little too late as Tomac secured his 13th moto win of the season by 1.5 seconds. Monster Energy Star Yamaha Racing’s Christian Craig finished third, one minute and 15 seconds behind the leaders, with Monster Energy Kawasaki’s Jason Anderson fourth and Troy Lee Designs/Red Bull/GASGAS Factory Racing’s Justin Barcia in fifth.

The final moto of the 2022 season had everything on the line and as the field exited the first turn it was Craig who came away with the MotoSport.com Holeshot, followed by Anderson and Sexton. Tomac was forced to work his way forward from a start deep in the top 10. In his pursuit of Anderson for second during the opening laps, Sexton suffered a bobble that shot him off track and caused him to tip over. He lost multiple positions and reentered the race right behind Tomac, in seventh. Sexton then tipped over again and lost another position.

Out front, the battle for the lead heated up between Anderson and Craig. The Kawasaki rider got alongside the Yamaha and made a savvy move to take the lead a little more than five minutes into the moto. Behind this exchange Tomac was able to break into the top three, while Sexton was on a recovery charge and clawed his way up to fourth. Tomac closed quickly on Craig, his teammate, and moved into second with ease. At that point, Tomac faced a 2.8 second deficit to Anderson. Needing to make a push, Sexton closed in on Craig for third but suffered another tip over. He remounted without losing a position.

As the moto surpassed the halfway point the battle for the lead was on between Anderson and Tomac. Despite having a faster pace, Tomac was unable to get enough of an edge to make a move. A slight miscue by Anderson saw him briefly put the bike in neutral, which allowed Tomac to slip past and seize control of the moto with six minutes to go. Sexton’s fight continued as well with a pass on Craig for third. From there, the Honda rider tried to track down the lead duo.

With the lead in hand, Tomac opened up a lead of more than six seconds as Anderson started to lose ground to Sexton for second. The Honda rider was decisive and made the pass, but faced too big of a deficit to contend for the lead. Tomac brought home an emphatic final moto win by 9.2 seconds over Sexton, with Anderson in third.

Tomac’s fourth 1-1 performance of the season was his biggest as he finished the year with a class-leading fifth victory, his first since the seventh round. His third win at Fox Raceway was the 32nd victory of his career and marked his 70th career podium finish, which moved him into second all-time. Sexton’s runner-up finish came on the heels of a hard-earned 2-2 effort, while Anderson’s strong final moto landed him third overall (4-3).

Tomac’s 11-race podium streak to close out the season and his 14 moto wins were the tipping point in the championship, where he finished seven points ahead of Sexton in the final standings in what has been the closest battle in the history of Pro Motocross. Anderson enjoyed a career-best season to finish third on the championship podium. Tomac’s title, combined with his Monster Energy Supercross Championship from earlier this year, also made him the first rider to sweep the season championships since Ryan Dungey did it during the 2015 season. The fourth premier class title of Tomac’s career is also the second most in history, trailing only Ricky Carmichael (7).

“I just think of this whole season in its entirety. It’s been the most enjoyable season of my career, by far, starting with supercross and now motocross,” said Tomac.

“This summer was incredible battling with Chase. He’s the future of this division. We pushed ourselves to the limits and even raised the bar.”