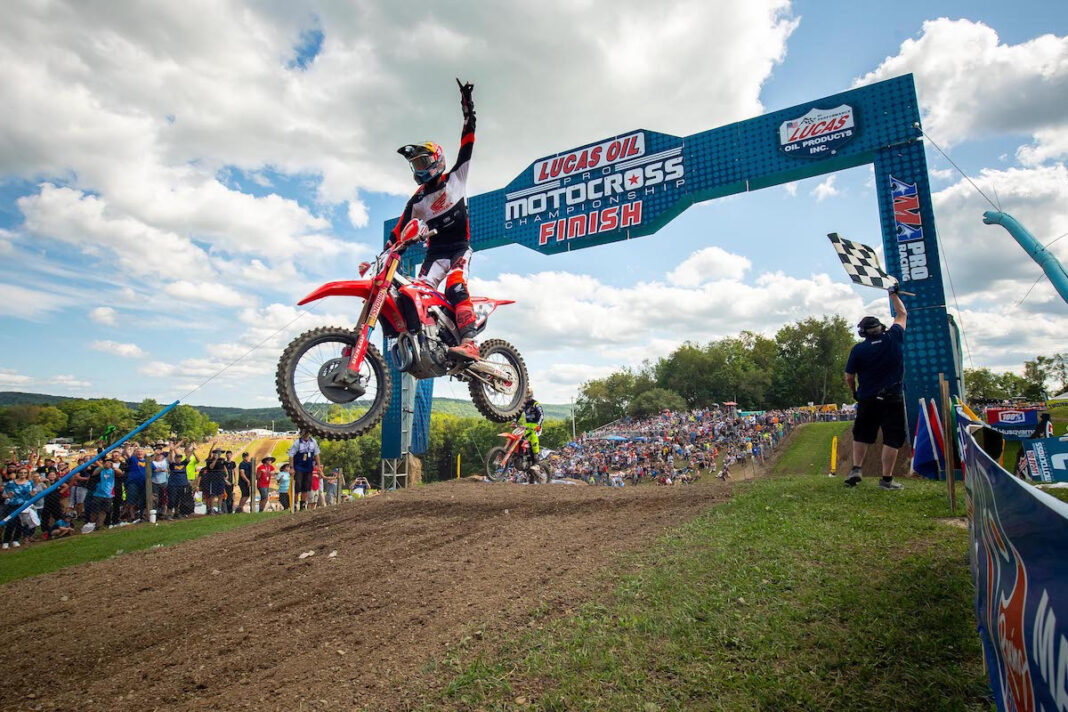 as the gate dropped on the opening 450 class moto it was Roczen clear ahead of the field exiting the first turn to easily capture the holeshot. As the rest of the field jockeyed for position behind him, it was the Monster Star Yamaha duo of Aaron Plessinger and Dylan Ferrandis who slotted into second and third.

Roczen was able to drop the hammer on the opening lap and took full advantage of the clear track to establish a multi-second lead over Plessinger and Ferrandis, as the lead trio surged out to a significant margin over the remainder of the 40-rider field.

Soon the race became a two-rider affair as both Roczen and Plessinger continued to pull away from Ferrandis. Roczen was comfortable in control of the moto, but Plessinger continually kept him honest by mirroring the lap times. No more than two seconds separated the lead pair through the first half of the moto.

Plessinger looked to be faster than Roczen in some places and even showed a wheel a couple times, but the Honda kept him at bay and put a few bike lengths between them. With 10 minutes remaining in the moto, as he gave chase to Roczen, Plessinger suffered a frightening crash that saw his Yamaha loop out and resulted in heavy impact with the ground.

Fortunately, Plessinger was able to get up and walk away under his own power, but it brought what began as a strong start to the afternoon to an abrupt and heartbreaking conclusion.

With the pressure no longer a factor, Roczen rode alone out front and managed a double-digit lead through the remainder of the moto to earn an impressive wire-to-wire win. He took the checkered flag 10.6 seconds ahead of Ferrandis, while Monster Kawasaki’s Eli Tomac followed in a distant third. Red Bull KTM’s Marvin Musquin was fourth, with his teammate Cooper Webb fifth.

The second and deciding moto began with Team Honda HRC’s Chase Sexton out front with the holeshot, followed by Webb, Ferrandis and Roczen. As Sexton looked to take advantage of his position at the front of the field Roczen was incredibly aggressive and made passes on both Ferrandis and Webb to surge up into second behind his teammate. Shortly thereafter Ferrandis put the pressure on Webb for third and successfully moved into podium position.

As the points leader took over control of third, the Hondas out front had built a lead of more than five seconds. Sexton showed impressive pace to maintain a lead of about a second over Roczen, but the German bided his time and waited for the race to come to him.

As the moto reached its opening 10 minutes Roczen pulled the trigger and went on the attack. An impressive outside move allowed Roczen to make quick, easy work of his teammate. From there he cemented his control of the moto with one of his fastest laps of the race.

Sexton kept Roczen honest and was within reach as the moto reached its halfway point, but Roczen responded to open up his biggest lead of the moto. The German never looked back and put the finishing touches on one of the most dominant outings of his career.

He wrapped up a sweep of the motos by six seconds over Sexton, while Ferrandis withstood a persistent threat from his fellow Frenchman Musquin to finish third.

It’s the second 1-1 effort for Roczen this season and signifies the 20th victory of his career, which moves him into a tie with James Stewart for sixth on the all-time wins list. It’s also the second straight victory for Roczen at Unadilla, where he won the last time the championship visited during the 2019 season.

“This was unreal,” exclaimed Roczen, who won earlier this season at Thunder Valley. “I just felt like I got into the zone today. The track was brutal, and it was easy to make a mistake, but I was able to find great lines and ride really consistent.

“The crowd was awesome today. They were so passionate and really kept me going. I just want to thank everyone for their support and my team for all the hard work.”

Ferrandis finished in the runner-up spot (2-3) for his eighth podium result this season, which effectively minimized the damage done in the championship standings. Musquin captured his first podium result of the season in third (4-4) to complete an overall podium composed entirely of international competitors.

“I came here to win, but Ken was way too strong today,” said Ferrandis. “It’s fine. Second overall is still good. I lost some points in the championship, but there’s four rounds to go. We’ll see. I think we got the maximum today out of myself and the bike. Ken was just better. We’ll come back and try to be on the top step.”

Roczen gained eight points on Ferrandis in the 450 Class standings, and now 39 points sit between them with four rounds remaining. Tomac, who finished fourth (3-7), is third, 62 points out of the lead.