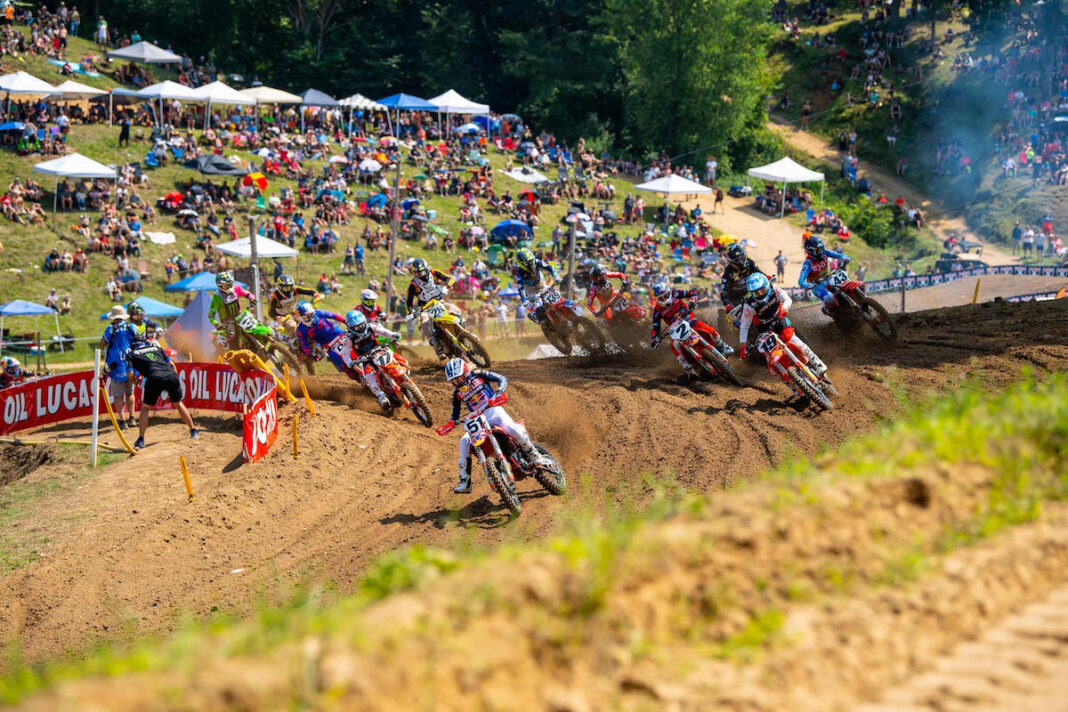 Red Bull GasGas’ Justin Barcia made his long-awaited return to the top step of the podium and grabbed a moto win en route to his first Lucas Pro Motocross 450 class victory of the season at Spring Creek.

The season reached its halfway point at the weekend and Minnesota fans were greeted with perfect weather that saw clear, sunny skies and temperatures in the low 80s, while racers were challenged by the circuit’s dramatic elevation changes and infamous sand whoops.

As the gate dropped for the opening 450 class moto of the afternoon it was Barcia who emerged with the holeshot ahead of Monster Kawasaki’s Adam Cianciarulo, FXR/Chaparral Honda Racing’s Coty Schock, and the Monster Star Yamaha teammates of Dylan Ferrandis and Christian Craig. At the completion of the opening lap it was Barcia, Cianciarulo, and Red Bull KTM’s Cooper Webb inside the top three.

Ferrandis, the championship leader, crossed the line fifth, while Team Honda HRC’s Ken Roczen, second in the standings, was caught up in a frightening first-turn incident that left the German in need of medical assistance and force him to withdraw from the moto.

Out front, Barcia continued to lead the way with Cianciarulo in pursuit and in search of a way around. Craig began to apply heavy pressure on Webb and made the pass for third with 20-minutes remaining. Just laps later, Craig’s Star Racing Yamaha teammates Ferrandis and Aaron Plessinger started to push their way to the front, both overtaking Webb. The march forward didn’t stop there for Ferrandis, as he muscled his way by Craig into third near the halfway point of the moto.

Cianciarulo continued to press Barcia for the lead, however, a costly mistake saw him lose the back end of his Kawasaki and crash out of second place, which moved Ferrandis and Craig into second and third and eventually forced Cianciarulo to retire from the race. With just over eight minutes remaining, Monster Energy Kawasaki’s Eli Tomac, who started 14th, entered the battle up front as he clocked the fastest laps of the race and blitzed his way past Craig for third. Tomac’s charge soon led him to the back wheel of Ferrandis as a three-way fight for the lead took shape.

The Frenchman successfully erased his deficit to Barcia and spent the waning laps of the moto in constant search of a way around, which resulted in a near crash between the two, while simultaneously fending off heavy pressure from Tomac for second. Barcia never wavered and was able to fend off numerous pass attempts by Ferrandis to hang on for his first moto victory of the season by just over a second. Ferrandis and Tomac completed the top three, with Craig fourth and Plessinger fifth.

The second and deciding 450 Class moto kicked off with Barcia earning a sweep of the MotoSport.com Holeshots for the day ahead Rocky Mountain ATV/MC-WPS-KTM’s Justin Bogle and Roczen, who avoided serious injury and rejoined the fray for Moto 2. Roczen used a pair of quick passes to move out front and lead the field around on the opening lap, ahead of Barcia and Bogle. Tomac came around in 10th, while Ferrandis was mired outside of the top-20 due to a crash coming down one of the hills.

Roczen was on a mission and in search of redemption out front, while Barcia was in hot pursuit to back up his impressive first moto result. As Roczen and Barcia paced each other, Ferrandis went down for a second time, costing him several more spots in the process. Team Honda HRC’s Chase Sexton closed in on Bogle and found his way around to take over third.

Roczen proved to be unstoppable and carried on to secure his fourth moto win of the season by 5.3 seconds over Barcia. Sexton finished third, followed by Tomac in fourth, while Ferrandis showed his resiliency with an impressive come-from-behind effort to finish fifth.

Barcia’s consistency, anchored by hisnmoto on win, carried him to the overall victory (2-1), which marked his first winning effort since the final round of the 2018 season and signified the first Pro Motocross victory for GASGAS in its debut season as a manufacturer. Tomac finished in the runner-up spot (3-4) for his third podium result in the past four races, while Ferrandis’ relentless charge in the second moto helped land him third overall (2-5), missing out on a second-place tiebreaker with Tomac. Roczen rebounded from a disastrous start to the day to finish ninth overall (40-1).

“It’s a lot to take in,” said Barcia. “I felt great on the bike all day and it’s just such an awesome feeling to be back on the top step of the podium again. The fans were just awesome out there. It’s been a while, but I never gave up and left it all on the track today. The team has been working hard to get me comfortable on the bike and I think today showed that everything is coming together. Hopefully, we can keep this momentum rolling into the rest of the season and click off a few more wins.”

The adversity endured by each of the top two riders in the division resulted in a significant shift in the point standings, as Ferrandis’ podium effort allowed him to gain 13 points and establish a 32-point lead over Roczen, who did all he could to minimize the damage. By virtue of his win, Barcia vaulted from fifth to third in the standings, 55 points out of the lead.

“I’m just disappointed in myself today,” said Ferrandis, who entered the day on a three-race win streak and has now finished on the overall podium at all six rounds thus far. “It was a difficult day. I crashed twice in that second moto and didn’t give myself a fighting chance. I’m here to win and that’s really what I want to do. I’ll go back to work and get ready to come out stronger next weekend.”

“It was definitely a hard one in the first moto. I got banged up really good and I need to make sure that my ribs aren’t broken,” explained Roczen. “I’ll be really sore tomorrow but as soon as I checked myself I knew there was no question in my mind I was going to come back out here and give my best. That’s what we were born to do. I knew I didn’t have the best gate pick, but I got pretty lucky and made it work, and then rode a smart race. I’m just glad I could finish, and I did all I could for what it was.”