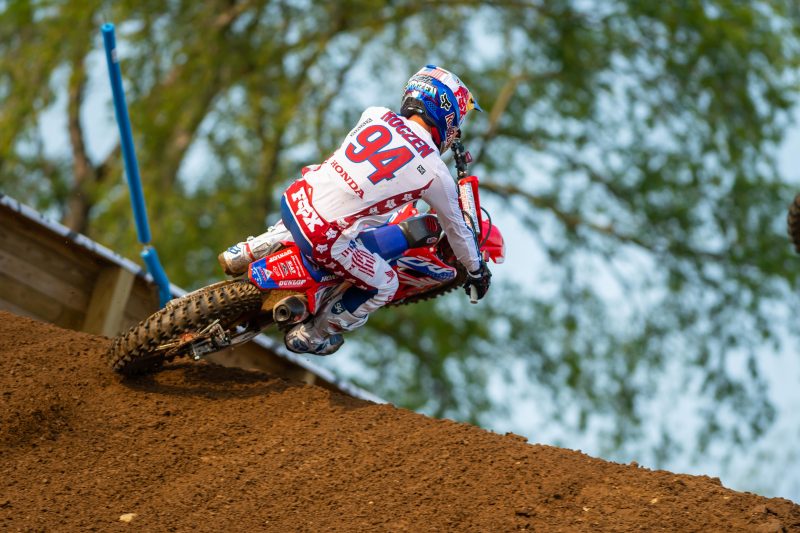 HRC Honda Ken Roczen struggled at RedBud on sunday with a few mistakes, and also getting docked two points in the final moto of the day for jumping on a red flag.

This weekend marked the return of the annual RedBud National to its traditional Independence Day Weekend date, after it was pushed back last year due to COVID-19. With only fourteen points separating Ken Roczen and Monster Energy Yamaha Dylan Ferrandis from the championship title, the battle will continue into the next round at Southwick this weekend.

“I was excited coming into RedBud for Fourth of July, it’s always a special race and the fans always go wild,’ said Roczen.

“We had a pretty decent couple of qualifying sessions. I ended up going fifth to the gate, which was totally fine. I felt pretty good on the track and was ready for the moto. In the first moto, I think I was third after the start and just kind of worked my way up there into second right away and made a move on Plessinger and was leading most of the race until about two laps to go.”

“I kind of lost my rhythm a little bit. The track is really hard-packed underneath and soft on top, so it was really tricky to ride. It just wasn’t really my best performance, but at the same time I was okay with the second place. I got passed there with a couple of laps to go and tried to hang on behind Ferrandis and tried to make a pass back, but it just wasn’t enough.”

“I was looking forward to the second moto. Moto two was kind of like when everything came undone. I was battling really hard to get to the front. I was in third and Tomac was leading and Plessinger was second. I made my way past Ferrandis and just sat in third for a while trying to see what the race gave me. I had a bad case on LaRocco’s Leap, as Plessinger’s roost slowed me down so much.”

“I hurt my wrist a little bit, but then a couple laps later I fell right after the leap. I tucked the front end, had a pretty big get-off, and my bars were a little bent. I’m glad I was able to finish at least in sixth and minimize the points damage. We’re healthy leaving RedBud and I’m just looking forward to prepping for next weekend’s race.”