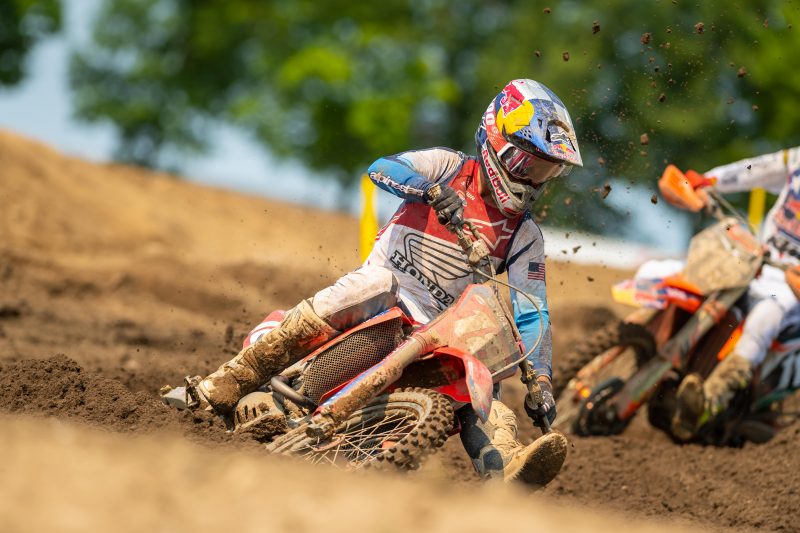 Team Honda HRC’s Jett Lawrence posted a podium overall finish in the 250MX class, this time during Saturday’s round at the Iconic RedBud National in Buchanan, Michigan.

The popular young Australian rode his CRF250R to the victory in moto one and overcame moto two crashes to tally third overall on the day, retaining the red plate that signifies leadership in the title chase. Brother and teammate Hunter Lawrence was fourth overall in the same class, while 450MX teammates Ken Roczen and Chase Sexton were fourth and sixth overall, respectively.

In the 250MX class, the first moto at the Michigan venue saw both Jett and Hunter start well and finish strong, in first and third, respectively. In moto two, the brothers both suffered poor starts and completed lap one outside of the top ten.

Jett made a mistake and crashed on the second lap, placing him outside of the top 30, but both he and Hunter made their way through the pack to finish fourth and sixth, respectively, earning Jett third overall and Hunter fourth.

“I had RJ (Hampshire) charging, and if he got me, I didn’t really have any ammo to fight back. Between motos, my team did a great job making some adjustments that made the bike work better for me, but I just didn’t give myself a very good chance for winning or even getting myself into a good position.”

“I came from 37th to sixth, so I think that’s pretty good. I definitely made a lot of passes, maybe the most passes of the day. I think if you look at the result it sucks because I lost three points, but you have to look at the positives, it was a strong ride, and I felt like there’s not many other people in this class that could do that.”