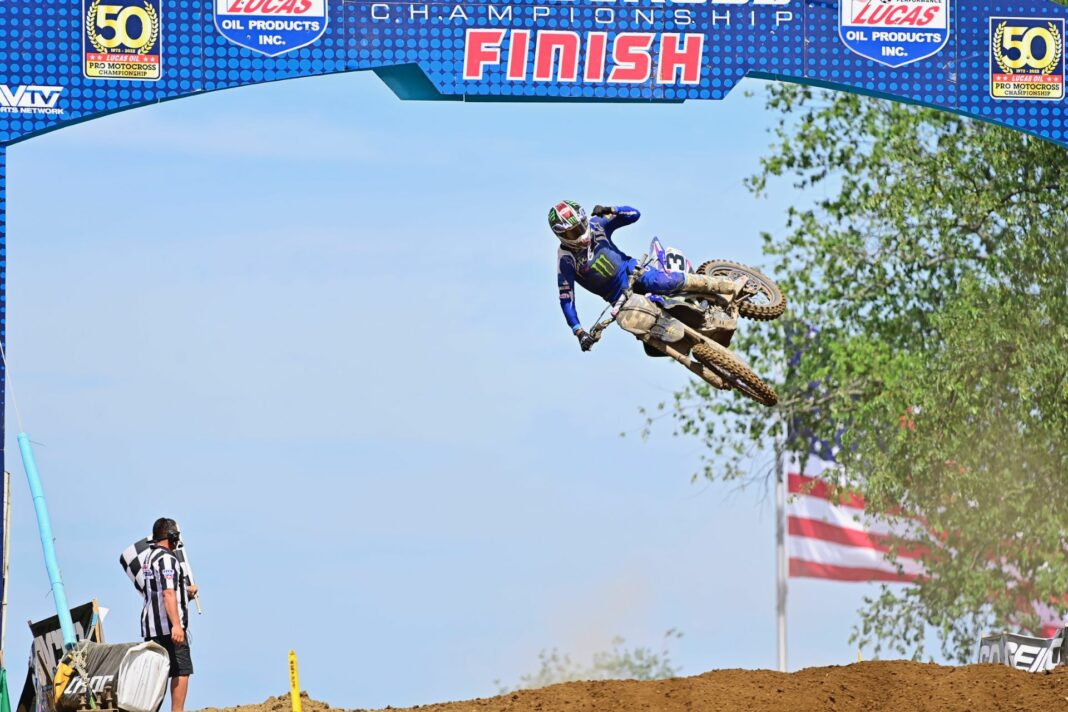 The Independence Day weekend welcomed the return of one of American Motocross’ most passionate crowds at the world-renowned RedBud MX Park. Monster Energy Yamaha Star Racing’s Eli Tomac became the first repeat winner of the season by taking his second consecutive 450 class victory.

As the 450 Class field launched out of the gate it was Tomac who emerged with his first Motosport.com Holeshot of the season over Monster Energy Kawasaki’s Joey Savatgy and Troy Lee Designs/Red Bull/GASGAS Factory Racing’s Justin Barcia. Tomac quickly sprinted to a two second advantage on the opening lap over Savatgy as Barcia engaged in a battle with the Team Honda HRC duo of Ken Roczen and Chase Sexton over third.

Tomac’s early race speed was too much for the competition to match as he steadily pulled away from Savatgy who held a comfortable gap over the rest of the field. The Honda teammates of Roczen and Sexton found their way around Barcia as they continued to fight over a spot on the podium. With just under 10-minutes remaining in the moto, Sexton used an inside line before the famous Larocco’s Leap to take Roczen’s line away and make the pass stick for third.

The push to the front for Sexton continued as he began inching onto the rear wheel of Savatgy for second. He would try the same line he used on Roczen, but Savatgy refused to surrender as he launched back around on Larocco’s Leap. Sexton regrouped and made the pass stick by getting a strong drive through the sand rollers.

Tomac proved to be unstoppable with a wire-to-wire performance that earned him his fourth moto win of the season with 6.3 seconds to spare over Sexton who finished runner-up. Savatgy finished an impressive third, marking his career-best moto result. Roczen followed in fourth, while Monster Energy Yamaha Star Racing’s Christian Craig completed the top-five.

As Roczen maintained a clear track out front, Tomac took control of second with a move on Barcia who continued to keep Dungey, Anderson and Sexton at bay. Just as Anderson and Sexton made their way around Dungey, a mistake saw Anderson go down, collecting Sexton with him in the process.

Tomac began to hit this stride, slowly working his way closer to Roczen with each passing lap. With just under 15-minutes to go, Tomac saw an opening and struck to take the lead from Roczen. Behind the battle up front, Sexton remounted from his early race incident with Anderson to pass Barcia for third.

It was another dominant effort for Tomac, bringing home his fifth moto win of the season by six seconds over Sexton. A late surge by Barcia landed him on the podium for the first time this season in third. Anderson and Dungey would finish fourth and fifth, respectively.

Tomac’s double moto sweep (1-1) carried him to his second victory of the season and the 29th of his career. A pair of consistent moto results (2-2) earned Sexton the runner-up position on the day. Barcia’s strong second moto was enough to give him his first podium of the season (8-3).

“It was a perfect day, perfect crowd and perfect track. I love riding here at RedBud and the track was awesome all day. The team did a great job getting me comfortable out there today and I think it showed by being quickest qualifier and winning both motos,” said Tomac.