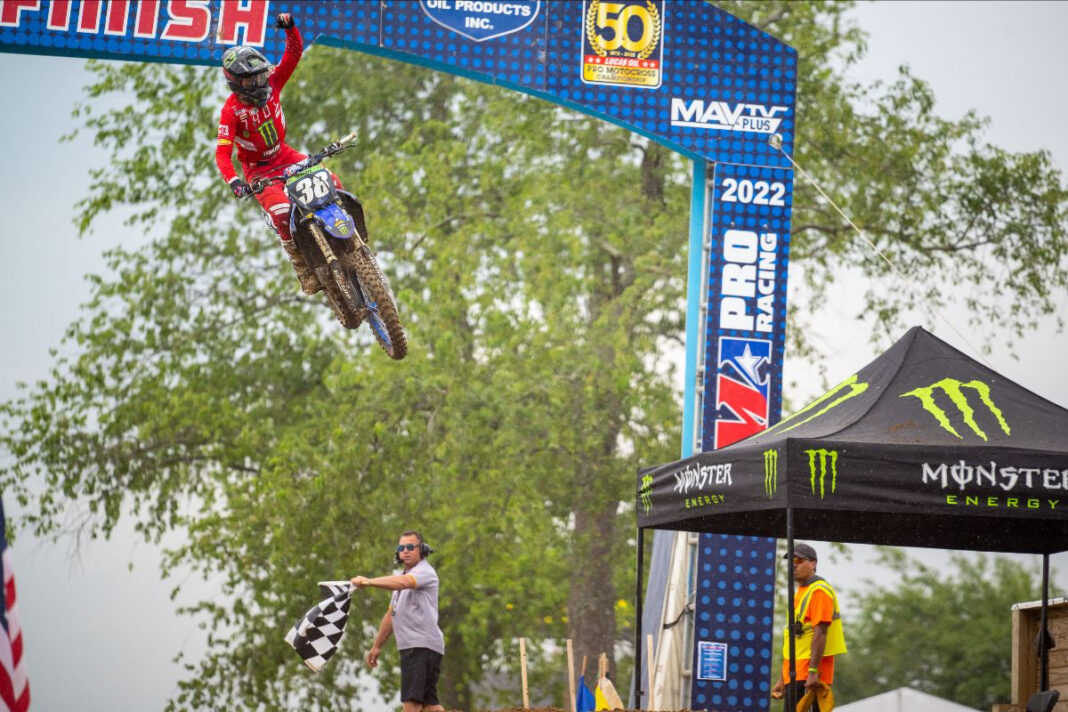 Yamaha rider Haiden Deegan kicked off the Red Bud MX weekend with a dominant performance in his combine debut.

The 2022 MX Sports Pro Racing Scouting Moto Combine commenced its second year as a program. The development initiative to prepare the world’s top amateur talent for their transition into the professional level made its first appearance at Red Bud.

The first moto of Friday afternoon began with KTM rider Mark Fineis out front with the holeshot ahead of “Dangerboy” Deegan and Honda’s Chance Hymas. A strong opening lap by Fineis, which included a clean execution on LaRocco’s Leap, allowed the Indiana native to build a gap on the field. His lead was short lived as both Deegan and Hymas made their way around and dropped Fineis to third.

With the lead in hand, Deegan put some distance between he and Hymas. As he gave chase, Hymas crashed after crossing the finish line. He was able to remount and continue, but dropped outside the top 10. Without the threat from behind, Deegan continued to build on his lead over the course of the moto. The shifted the attention to the battle for a spot on the moto podium, which saw Fineis and Husqvarna’s Talon Hawkins battle for second until Hawkins went down. That then put Fineis under pressure from the Yamahas of Jayden Clough and Gage Linville, both of whom got around the KTM.

Deegan cruised to the Moto 1 win with a winning margin of 32.5 seconds over Clough, followed by Linville in third. Fineis held on for fourth, while Yamaha rider Julien Beaumer rounded out the top five.

Moto 2
The final moto of the day saw Fineis and Deegan at the head of the pack once again, this time with Deegan leading the way. Fineis went on the attack early and returned to the head of the pack with a pass on Deegan. However, it wasn’t long before the Californian reclaimed the top spot and set sail on the field.

Fineis encountered misfortune and eventually dropped out of contention for the moto podium, which allowed KTM rider Daxton Bennick and GASGAS rider Caden Braswell to assume the position and wage battle for second. Braswell appeared to have the runner-up spot in hand but a late crash put Bennick back into second and allowed Husqvarna rider Casey Cochran to assume third.

Deegan was once again in a class of his own and took another statement win by 31.4 seconds over Bennick, with Cochran in third.

The convincing effort by Deegan landed him atop the overall classification with perfect 1-1 moto scores and 50 points. Bennick’s dramatic shift in fortune from one moto to the next resulted in 10-2 finishes that placed him into a tie for second (33 points) with Fineis, with 4-6 results (33 points), with the tiebreaker going to Bennick for the runner-up spot.