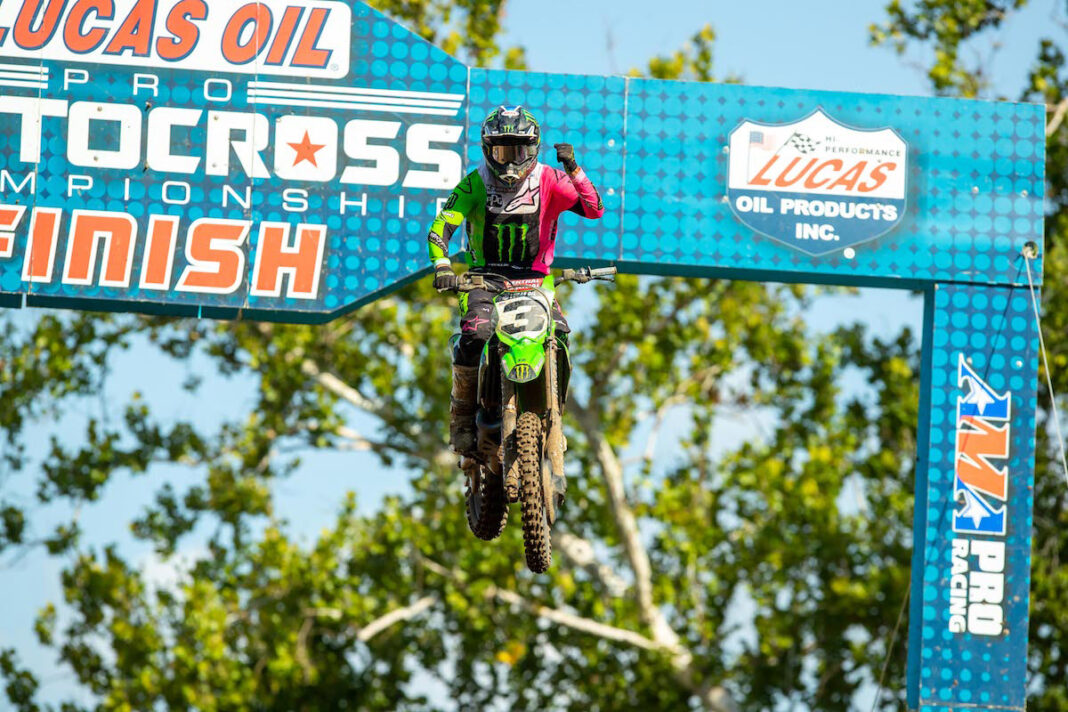 Monster Kawasaki’s Eli Tomac took his first win of the 2021 Lucas Oil Pro Motocross season at Ironman while series leader Dylan Ferrandis extended his advantage over Ken Roczen to put one hand on the title.

The Guaranteed Rate-backed weekend signified the 10th stop of the 12-round season and featured arguably the toughest weather conditions of the summer thus far with both high temperatures and high humidity.

As the gate dropped on the first moto and the field emerged from the first turn it was Rocky Mountain ATV/MC-KTM-WPS’ Joey Savatgy who grabbed the holeshot as Monster Star Yamaha’s Ferrandis and Tomac gave chase.

A wild opening lap saw several riders engaged in battle at the head of the pack, as Ferrandis went on the attack and got by Savatgy for the lead. However, Savatgy battled back and brought along a hard-charging Roczen aboard his Team Honda HRC machine. Soon Roczen was in the lead, but Ferrandis battled back to reclaim the position.

After a torrid opening phase of the moto Ferrandis, Rozen and Tomac settled into the top three and started to put some distance over the rest of the field. All three riders remained within a couple seconds of one another as the momentum ebbed and flowed. Roczen showed a wheel on Ferrandis a few times, but the championship leader never flinched.

As the moto passed the halfway mark, Tomac pulled the trigger on a move on Roczen and successfully made the pass for second. The Kawasaki rider then looked to track down Ferrandis for the lead.

The pressure on Ferrandis persisted throughout the moto, but he remained focused on hitting his lines and logged consistent laps to keep Tomac at bay. Ferrandis was also efficient in navigating through lapped riders, which allowed him to put some distance on Tomac in the late stages.

The Frenchman finished strong to capture his sixth moto win of the season, finishing 4.1 seconds ahead of Tomac, followed by Roczen in third. Red Bull KTM Factory Racing’s Cooper Webb posted his best moto finish of the season in fourth, followed by Team Honda HRC’s Chase Sexton in fifth.

The second and deciding moto got underway with Ferrandis leading the way with the holeshot ahead of Webb. With the clear track things appeared to be advantageous for the Yamaha rider, but Webb came on strong before the conclusion of the opening lap and surged into the top spot.

On the following lap Ferrandis found himself under attack from Tomac, and while the Frenchman initially held off the Kawasaki rider, Tomac made the pass happen and dropped Ferrandis to third.

With second place in hand Tomac set his sights on the lead and put the pressure on Webb. Ferrandis gave chase from third, while Roczen lurked in fourth. Despite Tomac’s best efforts, Webb’s crafty defensive riding allowed him to prevent the initial pass attempts. Tomac regrouped and mounted another attack, this time with success about 10 minutes into the moto. Tomac built a lead of nearly two seconds as soon as he had control of the moto, while Webb and Ferrandis began a battle for second.

Ferrandis wasted no time in attempting a pass on Webb and made the move as soon as the opportunity presented itself, which resulted in contact between the two. Webb got the worse end of the moment, briefly checking his balance, which allowed Ferrandis to slip by for second. Behind this battle, Honda teammates Roczen and Sexton engaged in a brief battle for fourth, from which Sexton came away with the position.

The top five continued unchanged through the remainder of the moto as Tomac went unchallenged en route to his fourth moto win of the season, all of which have come in the second moto. He took the checkered flag 4.7 seconds ahead of Ferrandis, who was closely pursued by Webb for the rest of the race as the KTM rider captured his first moto podium since the 2019 season.

Tomac’s 2-1 finishes put him into a tie with Ferrandis in the overall classification, but by virtue of Tomac’s second moto win the tiebreaker went to the Kawasaki rider. The win is his first since the eighth round of the abbreviated nine-round 2020 season and ends a 10-race winless drought, which is the longest gap between victories of Tomac’s decorated career. It also signified his 26th win in the 450 Class, where he sits fourth all-time.

“All I can say is it’s better late than never,” expressed Tomac. “I finally had the day I’ve been wanting to have. I kind of felt like there’s been two sides to me from one moto to the next all season. Today, I finally felt good in both. I got good starts, was able to make the pass happen in the second moto, and ride the race I wanted.”

Ferrandis secured his 10th podium finish of the season in the runner-up spot (1-2), while Webb landed on the overall podium for just the second time in the premier division in third (4-3).

By virtue of his second-place finish, combined with a fourth-place finish by Roczen (3-5), Ferrandis extended his lead in the 450 Class standings to 50 points, which puts him into a position to clinch the Edison Dye Cup one round early should he tie or finish ahead of Roczen at the next round.

“My success has been from hard work that I’ve put in for years. It’s finally paying off,” explained Ferrandis. “I do everything for my sport and to be on top. Today was just one of those days where I suffered on the bike. I don’t know why. I just didn’t have the strength. Eli was riding awesome, so credit to him. We had another good day in the championship, so I’m happy with the result.”