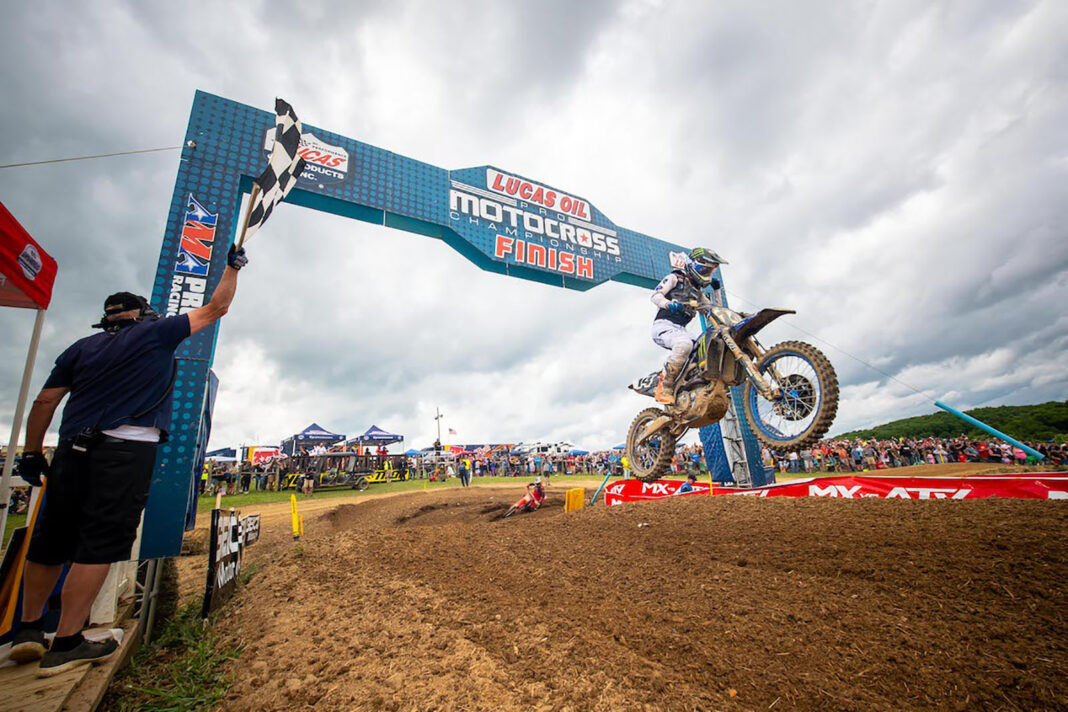 A hard-fought, consistent afternoon at High Point’s Lucas Oil Pro Motocross round was enough to give Monster Star Yamaha’s Dylan Ferrandis victory for the second time this season and the championship lead.

Light rain was present when the gate dropped on the opening 450 class moto, where Monster Kawasaki’s Adam Cianciarulo prevailed with the holeshot ahead of Team Honda HRC’s Chase Sexton and Monster Energy/Star/Yamaha Racing’s Christian Craig, who soon gave up the position to Team Honda HRC’s Ken Roczen, the championship leader. As Cianciarulo sprinted out to an early lead the Honda teammates engaged in a battle for second place.

As the moto surpassed the 10-minute mark, the lead trio solidified their hold on those positions as Ferrandis gave chase from fourth. As the minutes continued to tick away the distance between the top three continued to shrink.

Sexton soon closed in to within a couple bike lengths of Cianciarulo, but a mistake by Sexton not only caused the Honda rider to lose some ground, it forced Roczen into a mistake when he briefly went down and gave up third to Ferrandis.

With the threat defended, Cianciarulo gradually built a multi-second advantage over Sexton, who in turn built a comfortable margin over Ferrandis. As time ran out on the moto clock with just over three laps to go, Sexton tucked the front of his Honda and went down.

As he looked to remount, both Ferrandis and Roczen were able to get by, which placed Sexton in fourth when he resumed. Out front, Cianciarulo looked to close out his first moto win of the season with ease but was dealt with one last obstacle as a slower rider went down exiting the final corner.

With nowhere to go, Cianciarulo ran over the downed motorcycle and fell over. He kept his Kawasaki running, got up, and pushed his bike across the finish line to win in unconventional fashion. Ferrandis followed five seconds behind in second as Roczen rounded out the podium in third. Sexton recovered to finish fourth as Monster Energy/Star/Yamaha Racing’s Aaron Plessinger completed the top five.

The deciding 450 Class moto kicked off as Troy Lee Designs/Red Bull/GASGAS Factory Racing’s Justin Barcia emerged with the MotoSport.com Holeshot out of a gaggle of bikes. He was quickly passed by Plessinger for the early lead, while Monster Energy Kawasaki’s Eli Tomac and Cianciarulo followed through.

Cianciarulo put the hammer down and made an aggressive push that carried him all the way around Plessinger and into the lead. He continued to ramp up the pace and established a multi-second advantage after just two laps. Behind him, Tomac’s first opportunity to run at the front of the field in 2021 saw him surge around Plessinger into second to put the Kawasaki riders at the top of the running order.

As the battle up front took shape the class’ title contenders made moves as well, as Ferrandis worked his way from fourth and Roczen from sixth. Both riders were urgent in their push and successfully moved into third and fourth, respectively. By the time they finished their early charge, the Kawasaki teammates were more than five seconds ahead. From there, Ferrandis and Roczen went head-to-head for third and traded the position before Ferrandis got the upper hand and asserted control of the spot.

Up front, Tomac closed onto Cianciarulo’s rear fender and a battle for the lead ensued. Tomac was able to get by, but Cianciarulo fought back and reclaimed the position. However, Tomac didn’t give up and kept the pressure on. The two came together, which pushed Cianciarulo out of a rut and allowed Tomac to move into the lead for the first time this season.

Once out front Tomac started to build an advantage over his teammate and was soon in control of the moto. As the moto surpassed the 20-minute mark Cianciarulo found himself under pressure from Ferrandis and Roczen in third and fourth.

All three riders then duked it out for second and used every inch of the track in search of an advantage. As the crowd cheered them on, both Ferrandis and Roczen bullied their way around Cianciarulo, who dropped from second to fourth. That thrilling sequence also changed the battle in the overall classification, as Ferrandis moved into control of the afternoon.

For Tomac it was a dominant ride indicative of his three-year championship run. He stormed to his first moto win of the season by 3.2 seconds over Ferrandis, who was able to fend off Roczen for the entirety of the moto.

Although he missed out on a moto win, Ferrandis’ consistency was enough to vault him to the second overall victory of the season and his career via 2-2 moto finishes. Cianciarulo’s drop off the podium in the final moto relegated him to the runner-up spot by a single point (1-4), while Tomac made his first appearance on the podium this summer in third (6-1), which bumped Roczen (3-3) off the podium via tiebreaker.

“What a race. I don’t know what to say,” said Ferrandis. “I got a good start and was able to get by Ken (Roczen), which was good because he was so fast today. It was a war after that. Ken kept pushing me and we were able to come to Adam (Cianciarulo). It was crazy how competitive it was with them. We were going so fast and the track was so difficult. It’s just amazing to get a win here today and get a hold of the red plate again.”

With the win Ferrandis also reclaimed control of the red plate as 450 Class point leader for the second time this season. He currently has a slim three-point advantage over Roczen, while Plessinger, who finished sixth on the afternoon (5-8) maintained his hold on third, 30 points from of the lead.