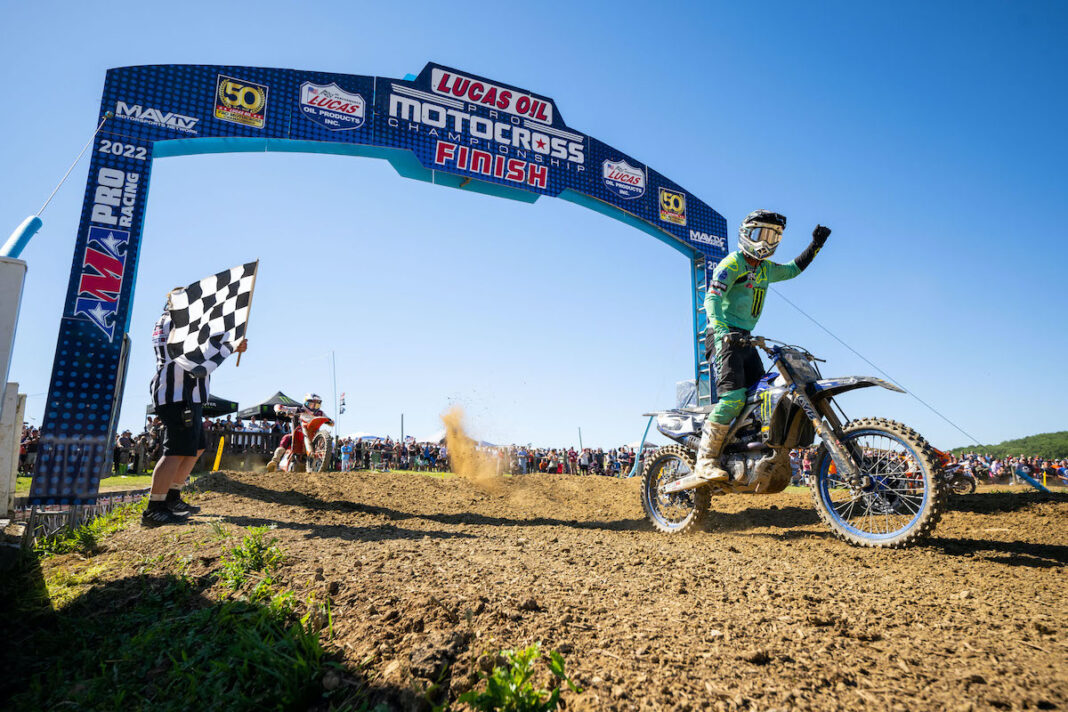 Monster Star Yamaha Racing’s Eli Tomac become the fourth different Lucas Oil Pro Motocross winner in as many races, prevailing via tiebreaker for the first win with his new team at High Point.

As the 450 Class field stormed into the first turn it was Team Honda HRC’s Chase Sexton who emerged with the MotoSport.com Holeshot, narrowly edging out Monster Energy Kawasaki’s Joey Savatgy and Troy Lee Designs/Red Bull/GASGAS Factory Racing’s Justin Barcia. As Sexton sprinted away and established a lead of more than two seconds on the opening lap, Savatgy and Barcia engaged in a spirited battle for second, as Monster Energy Kawasaki’s Jason Anderson and Tomac closed in from third and fourth, respectively.

The fight for a spot on the podium saw its first change when Anderson forced the issue and made an aggressive pass on Barcia for third. Tomac then went on the attack and made his way by Barcia for fourth. Anderson kept the momentum rolling and closed in on his teammate for second, where he made quick work of Savatgy to assume the runner-up spot. About two laps later Tomac dropped Savatgy off the podium with an impressive pass for third.

As the moto reached its halfway point Sexton enjoyed a significant lead of more than 10 seconds over Anderson, who in turn sat nearly five seconds ahead of Tomac. They settled into their respective positions until Anderson encountered misfortune and dropped from second to fourth, which allowed Tomac to assume second and Savatgy to claim third. Once Anderson was able to recompose himself he made the pass back on Savatgy to reclaim the final spot on the podium. Anderson’s recovery effort continued as he soon closed in on Tomac to initiate a late battle for second.

Sexton was in a class of his own out front and made it look easy with a wire-to-wire performance that brought him his third moto win of the season. He crossed the line 11.6 seconds ahead of Tomac, who held off Anderson in third. Barcia followed in fourth, while Savatgy finished fifth despite heavy pressure from Red Bull KTM Factory Racing’s Ryan Dungey and Team Honda HRC’s Ken Roczen.

The final moto of the afternoon saw Dungey charge ahead to his first MotoSport.com Holeshot of the season as the Honda duo of Sexton and Roczen gave chase. Roczen was able to slip past his teammate to slot into second and carried that momentum into a pass for the lead. Dungey responded immediately and reclaimed the top spot to complete the opening lap, but Roczen got back around. Sexton then followed through into second, which put Dungey into the crosshairs of Anderson in fourth. The Kawasaki rider made the move to take control of third.

As Dungey gave chase to Anderson it was Tomac who surprised both riders with a two-for-one move that saw him surge from fifth to third. The Yamaha rider was on a charge and quickly closed in on Sexton for second. The pressure from third pushed Sexton to increase his pace and close in on Roczen. The top three were separated by just over a second as the moto neared the halfway point.

A patient Sexton bided his time and pulled the trigger on a pass that gave him the lead, but a bobble shortly thereafter allowed Roczen to reclaim the position. That allowed Tomac to attack Sexton for second, which forced the point leader into another bobble that the Yamaha rider took advantage of. Sexton then was forced to deal with pressure from Dungey for third.

Back up front, Tomac stormed into the lead with an emphatic pass on Roczen with just under 13 minutes remaining. Once out front, Tomac distanced himself from the field and quickly built a lead of nearly five seconds. Soon Roczen and Sexton battled for second, with Sexton able to get the upper hand with nearly eight minutes to go. Roczen later lost his hold of third to Dungey, who enjoyed his best effort of the season thus far.

Tomac maintained his advantage through the remainder of the moto and brought home his third moto win of the season by 3.5 seconds over Sexton. Roczen put on a late charge to make a last-lap pass on Dungey for third.
Overall
In trading moto wins, Tomac (2-1) and Sexton (1-2) finished in a tie atop the overall classification, but Tomac prevailed for the 28th win of his career by virtue of his victory in Moto 2, which awarded him the tiebreaker. As a result, Tomac now has sole possession of third on the all-time 450 Class wins list. Sexton continued his four-race podium streak with a runner-up effort, while Anderson finished third overall (3-5) following a fifth-place result in the final moto.

“It seems like I need to figure out my lines better in the first moto. That’s what I did in Moto 2. We made a small bike change that helped a lot and we were able to make some good passes and ride our own race. It feels great to get the win and get on top of the box for the first time for Star Yamaha,” said Tomac.