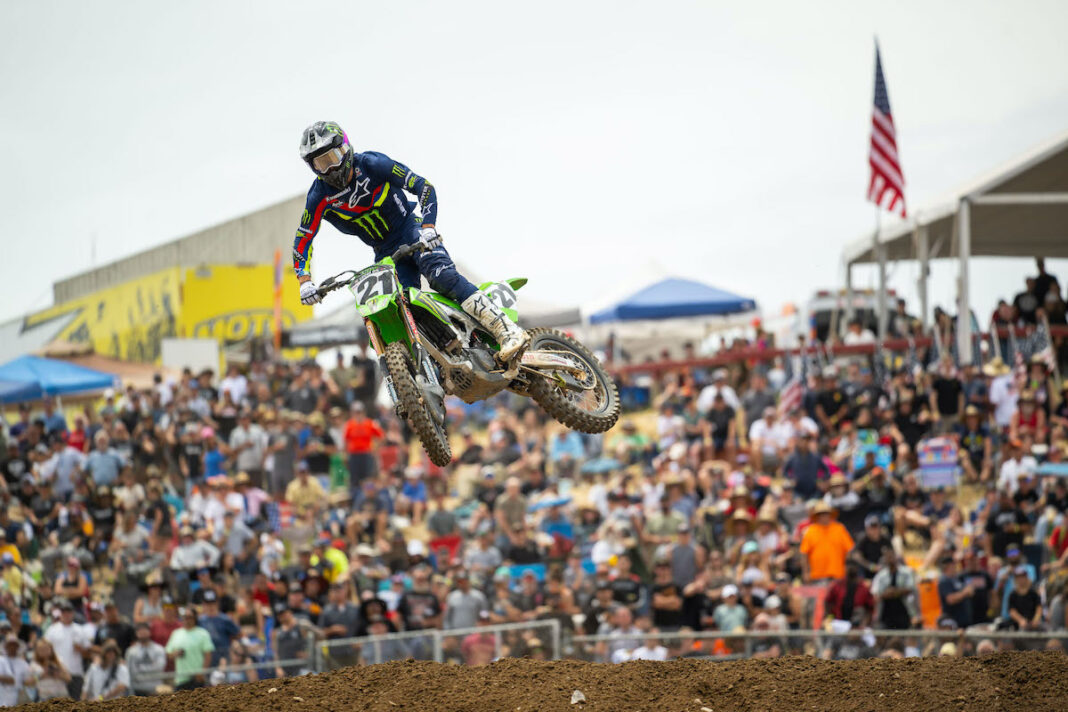 A tightly contested battle for the overall in the premier division saw Monster Kawasaki’s Jason Anderson emerge with the 450 class win for his long-awaited maiden victory in the Lucas Oil Pro MX series.

As the field roared through the first turn to begin the opening moto it was point leader and Team Honda HRC rider Chase Sexton and Anderson side-by-side to determine the MotoSport.com Holeshot, with Sexton prevailing to grab the early lead as Team Honda HRC’s Ken Roczen followed in third. Sexton pushed the pace on the opening lap to put several bike lengths between he and Anderson, as the pair also inched away Roczen.

The lead trio sprinted away from the rest of the field as Monster Energy Star Yamaha Racing’s Eli Tomac, Red Bull KTM Factory Racing’s Ryan Dungey, and Monster Energy Star Yamaha Racing’s Christian Craig gave pursuit. Back up front, Sexton, Anderson and Roczen settled into their respective positions through the halfway point of the moto, but Roczen would lose touch after contact with a lapped rider almost took him to the ground.

Anderson picked up the pace over the closing stages of the moto and moved to within striking distance of Sexton. The gap between them fluctuated as they navigated through lapped traffic, with Anderson arguably getting the better end of those passes. With three and a half minutes to go, Anderson pulled the trigger and got past Sexton on one of the track’s off-camber corners. Once out front, Anderson dropped the hammer and attempted to sprint away, but the Honda rider resisted and kept the Kawasaki within reach.

As the lead pair took the white flag they were separated by just a couple bike lengths. Lapped traffic factored into their battle and allowed Sexton get alongside, but Anderson countered the pass attempt. That proved to be the difference maker as Anderson held on to take the fourth moto win of his career by a mere three tenths of a second. Roczen followed in a distant third, with Tomac fourth and Craig fifth.

The deciding 450 Class moto kicked off with Red Bull KTM Factory Racing’s Antonio Cairoli, a nine-time FIM World Motocross Champion, out front for the MotoSport.com Holeshot, but he was quickly overtaken by Roczen, while Sexton slotted into third with Anderson just outside the top five. In trademark fashion, Roczen laid down a blitzing opening lap and opened a 1.5 second lead over Sexton, who moved into second, as Cairoli did battle with his KTM teammate Dungey.

As the Honda riders gapped the field, the attention shifted to Anderson as he looked to work his way forward from a sixth-place start. He was successful in doing so and passed both Dungey and Cairoli to move into fourth behind Tomac. Back out front, Sexton closed in on Roczen for the lead as the Honda teammates duked it out for the top spot. Sexton made a savvy move to take control of moto 10 minutes in, but Roczen stayed close and kept the battle going.

It wasn’t long before Tomac made it a three-rider affair at the head of the pack as the moto approached its halfway point. Tomac made his way by Roczen for second and looked to erase a 2.3 second deficit to Sexton. As this occurred, Anderson started to inch his way into the picture from fourth. The battle for the lead intensified with 10 minutes remaining in the moto as Tomac was all over Sexton’s rear fender. The Yamaha rider bided his time and made the pass happen with eight minutes to go. As Tomac took control of the lead Anderson responded in his own way with a pass on Roczen for third.

Just like Moto 1, Sexton showed his fight and kept within striking distance for several laps, but Tomac started to open the gap. As they started the final two laps, Sexton had clawed his way back and moved to within a second and a half of Tomac. In a near replication of the first moto Sexton got next to Tomac on the last lap, but couldn’t make the pass happen. The Yamaha rider took his first moto win of the season by 1.2 seconds over Sexton, while Anderson finished a strong third.
Overall
One of the closest finishes in recent memory saw the overall podium separated by just two points. Anderson’s first win in 12 years and 92 career starts came via 1-3 moto finishes, which edged out Sexton’s 2-2 performance by a single point. Tomac’s 4-1 effort left him two points shy in third. Anderson became the 74th different 450 Class winner in history.

Sexton’s runner-up effort allowed him to extend his lead in the 450 Class standings to 12 points over Roczen. The win moved Anderson up to third, 18 points out of the lead.

“I had to work to get up there (in the second moto). Honestly, I thought I only got on the podium, but after I pulled off the track I realized it was a win. It was 12 years too long, but we finally got it done. I’m damn happy. Let’s keep it going,” said Anderson.