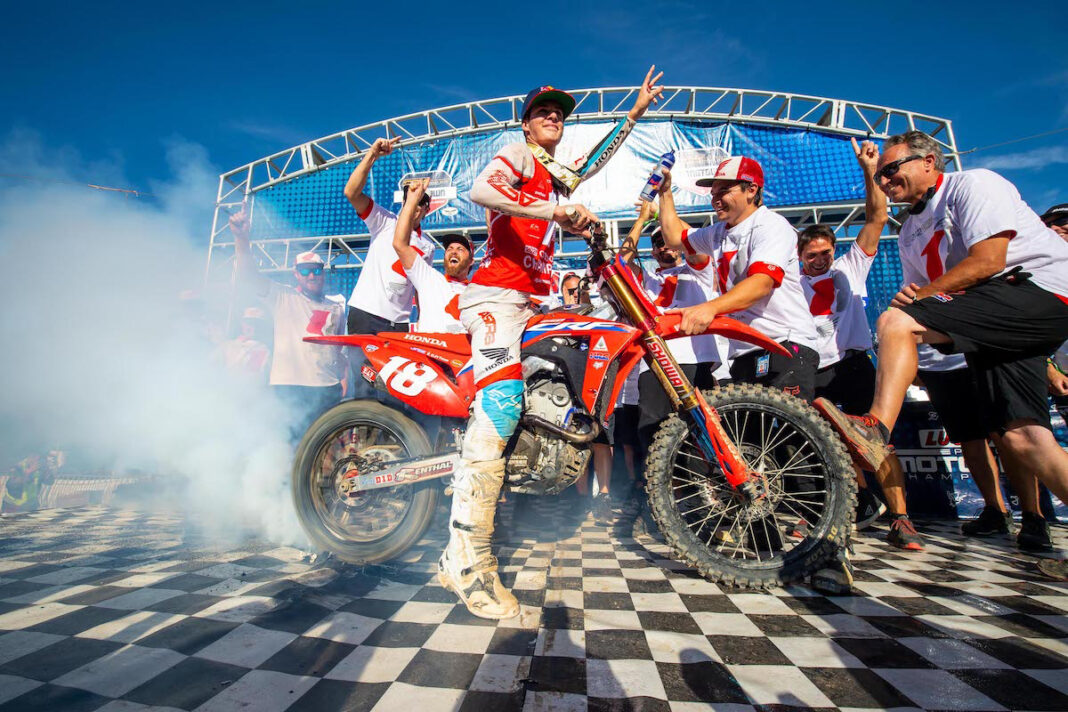 With the attention focused on the culmination of the title fight in the 250 class, the division began its first moto with Cooper out front with the holeshot ahead of Rockstar Husqvarna’s RJ Hampshire. As Cooper led, Lawrence was faced with a bit of adversity as he crashed on the opening lap and remounted deep in the field, crossing the line in 23rd place.

A couple laps later Lawrence faced even more adversity when a rider crashed in front of him and forced the Australian to stop and briefly get off his bike to keep from tipping over, which caused him to lose a couple more spots.

Back up front, Cooper continued to lead the way over Hampshire while Monster Pro Circuit Kawasaki’s Austin Forkner ran third. A little more than 10 minutes into the moto Forkner was seen pushing his motorcycle off the track, which moved Bar X/Chaparral/ECSTAR Suzuki’s Dylan Schwartz into third. Further back, Lawrence clawed his way into the top 20 and broke into the top 15 before the moto reached its halfway point.

Hampshire was able to close in on Cooper and stabilized the margin to just over a second, but Cooper responded with his fastest lap of the moto to open it back to nearly three seconds. Behind them, the battle for third between Schwartz and Troy Lee Designs/Red Bull/GASGAS Factory Racing’s Michael Mosiman turned into misfortune for both riders as they made contact and went down. That handed third place to Team Honda HRC’s Hunter Lawrence. The incident also worked to the benefit of Jett Lawrence, who was able to get by both Schwartz and Mosiman to break into the top 10 and slot into ninth with less than five minutes remaining.

Cooper stretched out his lead in the closing stages of the moto and went wire to wire for his sixth moto win of the season, crossing the line 3.5 seconds ahead of Hampshire, with Hunter Lawrence in third. Monster Energy/Pro Circuit/Kawasaki’s Jo Shimoda finished fourth, while Red Bull KTM Factory Racing’s Max Vohland completed the top five. Jett Lawrence did well to overcome the odds and minimize the damage of his early misfortunes to finish eighth.

As the riders lined up on the starting gate one final time in 2021 a total of 11 points separated the title combatants, who lined up side by side. If Cooper were to win, Lawrence would need to finish no worse than seventh.

As the field emerged from the first turn to begin the moto it was Rockstar Energy Husqvarna’s Josh Varize who captured the holeshot, followed by AEO Powersports GASGAS rider Ty Masterpool and Cooper, while Lawrence went to work from a start just outside the top five. Adversity then struck Lawrence for a third time as he went down in pursuit of Vohland, which dropped the Honda rider outside the top 10.

Meanwhile, Cooper took matters into his own hands and stormed into the lead just five minutes into the moto, which put the pressure on Lawrence to respond. The Australian was patient and started to gain positions one-by-one, avoiding any additional misfortune.

Back up front, Cooper established a lead of more than five seconds as Forkner moved into second and brought his teammate Shimoda along in third, dropping Varize from the top three. Shimoda then made the pass on Forkner to take over the runner-up spot.

Cooper wrapped up the best performance of his career with another dominant moto win, three seconds ahead of Shimoda in second, while Lawrence put forth a championship-winning ride to finish third.

It signified the first 1-1 outing for Cooper and also marked the first time in his career that he’s won more than one race in a single season. He finished on the overall podium at all 12 rounds and ended the season with the fourth overall victory of his career.

“Every weekend on the overall podium is a big accomplishment for me,” said Cooper. “I gave it all I had today and did what I had to do. I’m really proud of that, especially to get my first 1-1. Maybe it was too little, too late, but we worked our butts off and can end the season with our heads held high.”

Shimoda wrapped up an impressive close to the season in second (4-2), as the Japanese rider captured three runner-up finishes in the final four rounds. Hampshire rounded out the overall podium in third (2-6).

Lawrence’s title-winning effort came on the heels of one of his worst finishes of the season in fifth (8-3), but the podium effort in the final moto allowed him to finish six points ahead of Cooper in the final standings. It marks the first 250 Class championship for Honda since 2013 with Eli Tomac.

“It feels so great,” exclaimed Lawrence. “I rode so bad today and Cooper rode awesome. I loved racing him this season because he kept me on my toes. It’s a very special day for me, but I could have never done this without all the support of my family, my team, and so many others who helped me get here.”

In addition to the newly crowned champion, the 2021 Marty Smith Rookie of the Year was also named at the end of the day, as Vohland took the prestigious honors on the heels of a career-best fourth-place finish (5-4) at his home track. The second-generation racer finished ninth in the final standings.

Ironman National MX: ‘I really like this track’ – Hartranft