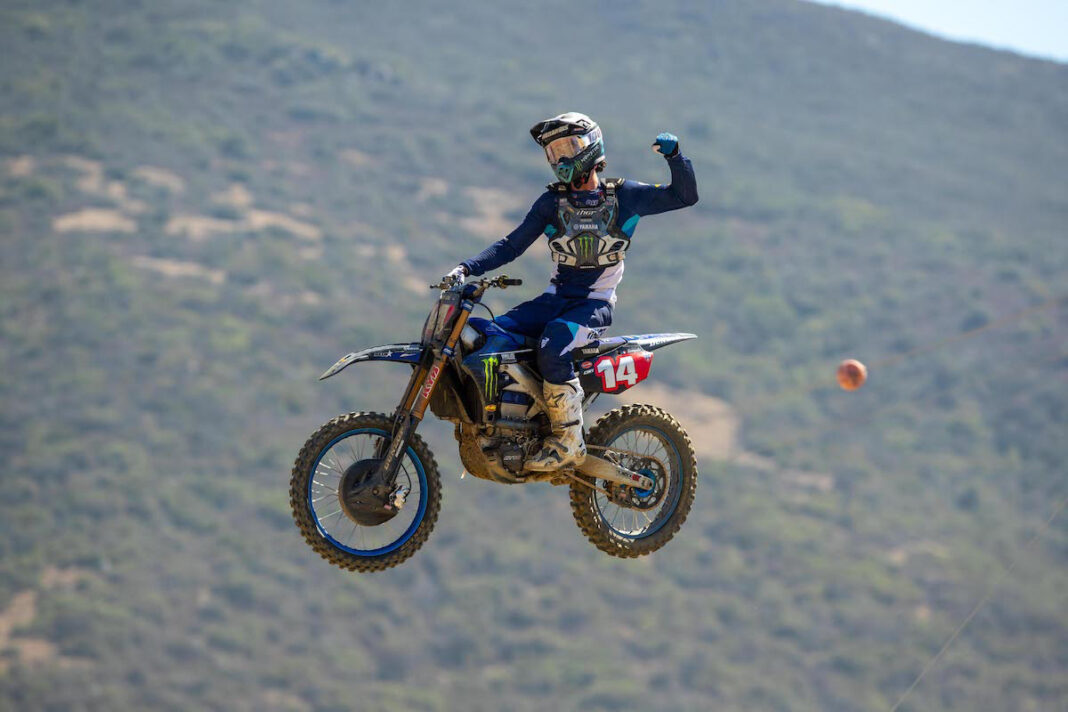 He became the 26th different 450 titleholder in 50 seasons and is also the first Frenchman in 30 years to win the prestigious championship.

The summer’s most intense weather conditions didn’t deter Monster Kawasaki’s Eli Tomac from using a dominant ride in the second moto to earn back-to-back 450 wins, where a tiebreaker allowed him to edge out Ferrandis for the top step of the podium.

The opening moto of the afternoon started with Team Honda HRC’s Ken Roczen leading the way with the Holeshot, followed by Red Bull KTM’s Cooper Webb and Ferrandis. The German looked to take advantage of the clear track and sprint away from the field, but both Webb and Ferrandis kept him within reach and even applied pressure for the lead.

Roczen responded and quickly built a three-second advantage over his rivals, which forced Ferrandis to pick up the pace and make the move on Webb for second a little more than 10 minutes into the moto. Ferrandis continued to push and eliminated a three-second deficit to Roczen to challenge for the lead at the halfway point of the moto. Once he closed onto the rear fender of the Honda, Ferrandis made quick work to take over the lead and seize control of the moto.

With first place in hand, Ferrandis continued to sustain the pace and ran the fastest laps of the moto to move out more than five seconds clear of Roczen. Behind them, a long, tense battle for third played out between Webb and Tomac. The pair traded fast laps and momentum surges for several laps, as Webb fended off numerous pass attempts by Tomac. As the moto closed in on its final five minutes, lapped riders gave Tomac the opening he needed to take advantage of Webb being slowed, which provided an unchallenged pass for the position and moved Tomac into third.

With Webb no longer an issue, Tomac was able to pick up his pace and dramatically lowered his lap times, including the fastest lap of the moto, to close in on Roczen and make the pass for second. Roczen’s pace dropped off dramatically and caused him to lose ground to Webb, which led to a last-lap battle for third.

Back out front, Ferrandis carried on to his seventh moto win of the season by 3.9 seconds over Tomac, while Roczen held on for third. Webb finished fourth, followed by Monster Energy/Star/Yamaha Racing’s Christian Craig in fifth.

The final 450 moto stormed out the gate with Webb leading the way for the MotoSport.com Holeshot, closely followed by Roczen and Ferrandis. Roczen went on the attack on the opening lap and muscled his way by Webb to take control of the top spot, while Ferrandis followed through into second. The Frenchman kept the momentum rolling and looked to make his way around Roczen, which he did before the completion of the opening lap.

As the leaders settled in up front, Tomac was on the charge forward. After starting fifth, Tomac got into a groove and began to pick off riders at will. He first passed Craig for fourth, then made quick work of Webb to move into third. Not long after that the Kawasaki rider closed in on Roczen and took over second.

Tomac faced a small deficit to Ferrandis, but made quick work of erasing that. Just over 10 minutes into the moto the battle for the lead was on. Once they were side by side, Ferrandis didn’t put up a challenge and let Tomac surge ahead. As the change for the lead unfolded, Webb made the pass on Roczen for third. As the moto wore on, Roczen lost more positions and eventually dropped out of the top five.

Tomac ran away from the field over the second half of the moto and established a lead that surpassed 30 seconds. He took his fifth moto win of the season by 45.8 seconds over Ferrandis, with Webb nearly a minute behind in third.

After enduring the longest win drought of his career, Tomac has become the hottest rider in the 450 Class with two straight wins, with a tiebreaker putting him atop the overall standings (2-1). His 27th victory in the premier division puts him into a tie with Bob Hannah for third on the all-time wins list.

“I just felt so good in Moto 2,” said Tomac. “I was a little back in the beginning, but was able to really make passes and got the job done early. It’s really fun to be out there when I’m in the zone like that and it’s great to get a couple wins here late in the season.”

Ferrandis’ runner-up effort (1-2) was more than enough to wrap up his first 450 Class title and hoist the Edison Dye Cup, as his 62-point lead over Roczen surpassed the 50-point threshold of available points at a single event. Ferrandis joins Jean-Michel Bayle as the only French riders to win the championship in the premier division. Additionally, he’s the eighth rider in history to earn the title in his first season at the sport’s highest level, while also giving Yamaha its first 450 Class championship since 2007 with Grant Langston.

“I think I’ve run out of emotion,” said Ferrandis. “Today was hard, last weekend was hard. I’ve pushed deep inside to get through it. I dreamed when I was young to be a 250 Class Champion, but I never dreamed of being a 450 Class Champion. It’s not even a dream come true, it is something that’s the best thing I could ever do in my life. Wow, it’s unreal.”

Webb rounded out the overall podium with his second straight third-place finish (4-3).

While Ferrandis has wrapped up the championship one round early, the battle for second in the final standings is closer than ever as Roczen and Tomac are separated by just nine points.