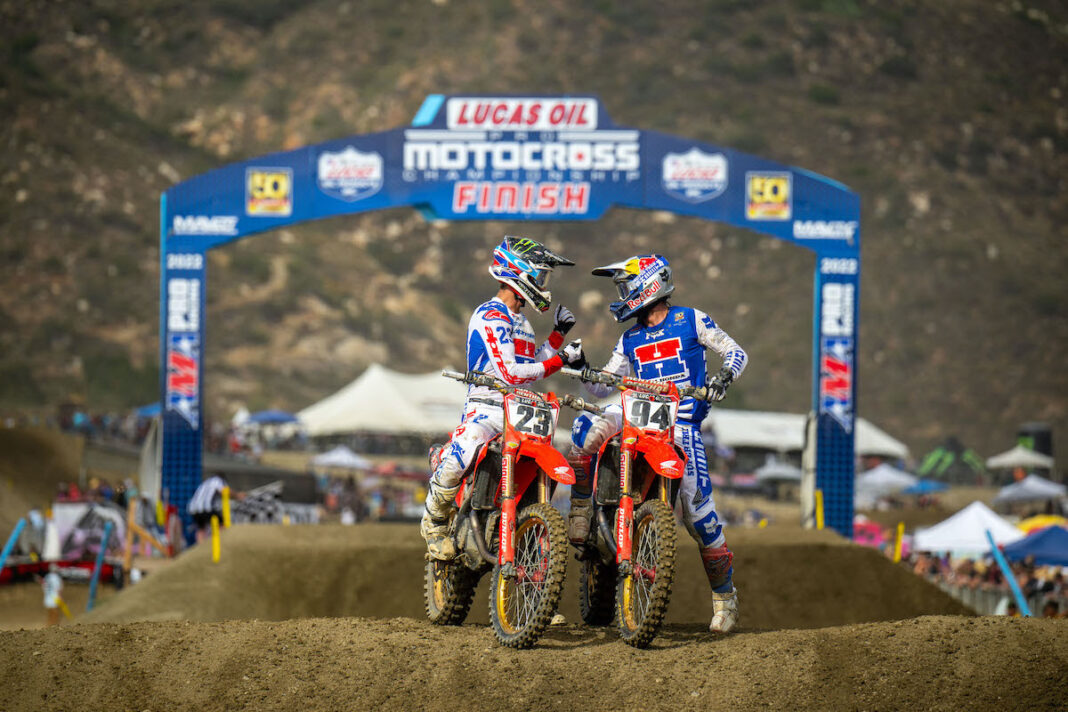 After weeks of anticipation, the 50th Anniversary of the Lucas Oil Pro Motocross Championship, sanctioned by AMA Pro Racing, officially kicked off with round one at Honda Fox Raceway.

Mostly cloudy skies and cool temperatures made for near-perfect race conditions, which resulted in a stellar afternoon of racing that saw the four-rider lineup for Team Honda HRC dominate all four motos across the 450 and 250 Classes. In the premier division, Chase Sexton posted the first 1-1 performance of his career, out-dueling teammate Ken Roczen, while Jett Lawrence kicked off his 250 Class title defense with a sweep of the motos, followed by his brother Hunter Lawrence in second.

The first 450 Class moto of the afternoon began with Roczen at the front of the field for the MotoSport.com Holeshot, followed by Rockstar Energy Husqvarna Factory Racing’s Shane McElrath and Monster Energy Star Yamaha Racing’s Eli Tomac. Roczen and Tomac quickly asserted themselves up front and established a multi-second lead, while McElrath lost third place to Sexton.

Roczen separated himself from Tomac through the first ten minutes of the moto, while Sexton closed in on the Yamaha rider to initiate a battle for second. Sexton made quick work of Tomac and set his sights on the lead. The Honda teammates were separated by less than a second at the halfway point of the moto as a spirited battle for the top spot unfolded. A persistent Sexton eventually made the pass stick to seize control of the moto. Behind them, Red Bull KTM Factory Racing’s Ryan Dungey, in his first start since retiring in 2017, made the pass on Tomac for third. A couple laps later, the position changed hands again as Monster Energy Star Yamaha Racing’s Christian Craig took the position from Dungey.

Sexton closed out the moto in strong fashion to capture the first moto win of the season, while Roczen helped secure a Honda 1-2, 15.8 seconds back. The battle for third intensified in the closing laps, but Craig held off a hard-charging Jason Anderson and his Monster Energy Kawasaki for third, while Dungey completed the top five.

The field stormed out the gate for the final moto of the day with Sexton back out front for the MotoSport.com Holeshot, followed closely by Roczen and Dungey, while Anderson went down fighting for a spot near the front and dropped well back in the field. A determined Roczen put the hammer down on the opening lap and went on the attack with his teammate, storming past Sexton for the lead as Dungey settled into third ahead of Craig.

Roczen sat firmly in control of the first half of the moto, but as the 15-minute mark passed Sexton started to erase the deficit and soon enough moved to within a few bike lengths of his teammate. Much like the first moto, the battle for the lead spanned multiple laps, as Roczen fended off the pressure. As the fight out front unfolded, Dungey lost positions to the Yamaha duo of Craig and Tomac, who moved into third and fourth, respectively.

Back out front, Sexton was able to make a pass stick on Roczen and grabbed the lead with just under 10 minutes to go. Roczen didn’t let up and responded to the pass by keeping the pressure on Sexton as they navigated through lapped riders. However, Sexton was simply too consistent over the final stages of the moto and carried on to complete the sweep of the motos by 4.5 seconds over Roczen, while Craig withstood a persistent challenge from Tomac to claim third.

The first 1-1 performance of Sexton’s career resulted in his third premier class victory at the same track in which he captured his maiden triumph at the final round of the 2020 season. Roczen finished in the runner-up spot with 2-2 finishes, while Craig captured the first overall podium result of his career in third (3-3).

Sexton now leads the point standings for the first time in his career and has established a six-point lead over Roczen, while Craig sits ten points back in third.