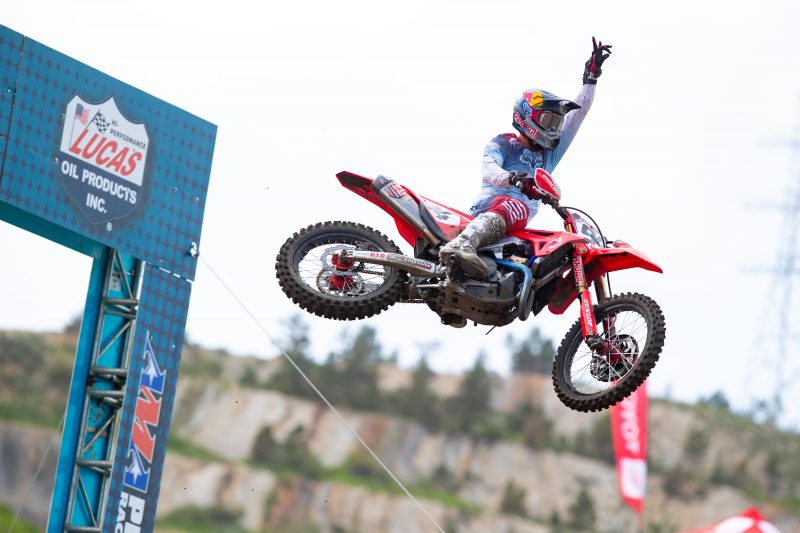 Team Honda HRC Ken Roczen has had a flawless weekend at The Thunder Valley circuit, Colorado for round two of the AMA Pro Motocross Championship.

The German grabbed a 1-1 scorecard at round two, claiming the championship title plate and points after setting the fastest lap time in qualifying earlier on in the day. Even after getting passed by Pro Circuit Kawasaki Adam Cianciarulo and Monster Energy Star Yamaha Dylan Ferrandis, Roczen pushed through to complete moto one win passing them both with three laps to go. He also then checked out by 8.9 seconds in the second moto ahead of Red Bull KTM’s Cooper Webb.

“I honestly don’t know what to say,” Said Kenny. “We haven’t had a perfect weekend like this in a long time. The team and I have done some work on the suspension, but it just isn’t proven until we race with it.”

“I felt comfortable and got some good finishes. I had the pole position today and won both practices to go into the first moto, and had a great, great battle with Adam and Dylan in the first moto, and I was able to be aggressive in the end and clinch the win.”

“That was huge for us, I was really happy with that and I felt strong in the end. I tried to fit in as much recovery as possible between the motos, and honestly, it was really nice before the second moto win with the cloud cover, so it was perfect conditions.”

“I really liked how they didn’t go too deep with the tilling on the track, because it allowed us to move around and pretty much use the entire track, so I had a lot of fun out there. The track just really suits my style and it was an incredible day. I was bummed my family couldn’t be here, but so stoked for my team and myself, it’s just what we needed.”

Ironman National MX: ‘I really like this track’ – Hartranft