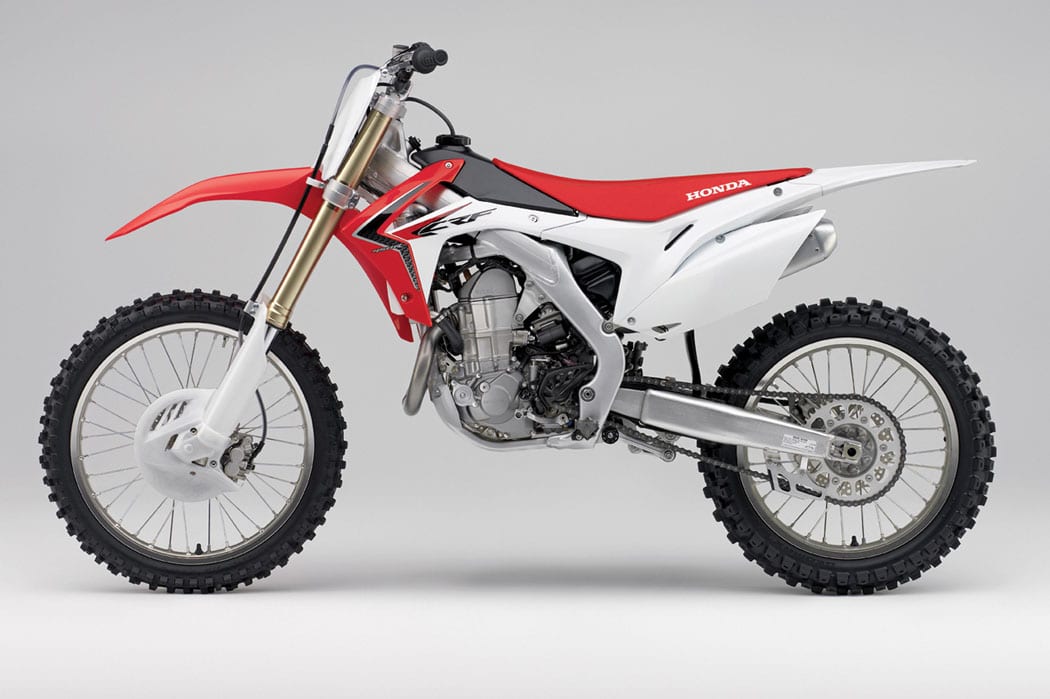 If you’re feeling the need, the need for speed, let Slider and Merlin fill you in on what the magazine machines have been up to…

It’s been a brief love affair with our 2013 Honda CRF450R and in this time we’ve successfully taken this completely standard bike and competed in three events – the Patchquick Trophy, Vets British Championship at Hawkstone Park and finally to complete our journey the Vets World Cup at Matterley Basin.

Patchquick was an eye opener for me in regards to racing with young ‘uns and getting all pushed about and stuff. The modifications we made were the front oversized braking disc, hydraulic clutch and Yoshimura exhaust system. For Hawkstone the holeshot device was fitted, gearing was modified to reduce running friction and the DBR Eat My Dirt graphics made the bike look uber-sweet.

Then we got the bike totally race fit using Pro Circuit radiator braces, Raptor-grab your feet you ain’t movin’ foot pegs and Pro Taper handlebars and control goodies from Apico for the race crescendo at the British Grand Prix where I got to race against riders who I lined up with 15 years before. Doing it again on a jump infested track which was awesome to race on was amazing!

There are a couple of things that are worth pointing out. Firstly, that the only motor performance enhancing product that we used was the exhaust system and nothing else! The motor and ECU was all set to ‘completely standard’ proving that pulling a Honda out of a crate and racing it immediately is all good. Other hop-ups we could have done to the motor would be to ‘flow’ the head improving the gas flow performance, moved the power about by adding different cams, changed the piston for one that gave a higher compression and also improved the air flow from the airbox side. With the ECU we could have changed the ignition timing and fuel delivery to match the pipe and other motor improvements had we made them! Of course we didn’t, instead we just used the soft feeling, smooth delivery of power that the Honda provides its user.

The other area in which we could have made further developments – which we didn’t explore and yet still got great performance from – is the suspension. I absolutely love the new air fork design and think that the saving in weight, reduction in stiction and the ability to change the equivalent to strength of fork springs by just adding a couple of puffs of wind is brilliant!

Get used to checking the pressure in your forks because this system is likely to stay. Of course we can alter the shim settings both up front and in the rear but out of the crate the suspension units have coped tremendously well with a rock hard and amazingly slippery Patchquick, rough and gnarly Hawkstone Park with its big, sandy braking bumps and whoops and again finally coping with my over-jumping and rut riding at Matterley Basin.

Our love affair has been short and sweet, our testing has been successful in making the bike even more race ready and the race results have been mega. All in all, the Honda CRF450R has been a great companion in our quest to satisfy Maverick’s twisted mind…