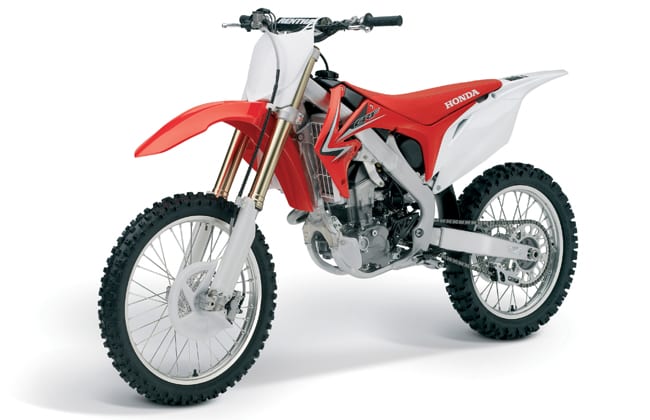 With the 450 getting its big make-over last year Honda have been working on developing the potential of the CRF250. The 2009 bike was a good, solid improvement on what could be argued was Honda’s Achilles’ heel as for too long they didn’t have a 250F that could be called really competitive. Reliable for sure – as you’d expect from Honda – but not really quite cutting it. This year’s model was a positive step in the right direction and now for 2010 they have taken an even bigger stride. Next year’s model has put them right back in the mix.

Like this year’s 450 it’s a brand-new bike from the ground up. Of course this bike has benefited from the knowledge gained in developing the 450 and the fact it even carries the same plastics and looks virtually identical highlights this. The first and biggest noticeable improvement is the fuel injection. EFI has made a difference on the bigger bikes but to be fair with the power of the 450 at your disposal it’s maybe not so significant to your overall lap times. Well on a 250F it will be and on this Honda it definitely is if we are comparing to the 2009 model. This is razor sharp and with all the other refinements it now has a much better starting position to be competitive straight from the crate.

It’s stronger in the engine department too and that’s due to a whole host of changes. The bore has been decreased to 76.8 for greater strength and there’s a new piston material that keeps the weight down. The compression ratio has gone up from 13:1 to 13.2:1 and a new valve spring benefiting directly from MotoGP technology has improved durability and achieved higher RPM. Put all that together and you have a bike that has far more bite than it’s ever had – finally the CRF250 is baring its teeth. From the bottom it pulls much stronger than it’s ever done and while it may still not be the fastest in the class it does offer a brilliant all-round usable torque. Couple that powerplant with the fuel injection and it’s a bike that really encourages you to push your limits from the get-go.

It is a different bike and it feels it. The motor is smooth and brings confidence and Honda have it right with the chassis too. The new frame has a lower engine mount position and a more rearward front axle position giving it a lower centre of gravity with a more positive feel on the front end. The new swingarm is 29mm longer which Honda claim improves stability under acceleration – it does. Although the bike is technically longer than this year’s model it actually feels shorter and more manoeuvrable and really easy to put exactly where you want it. The whole thing just feels leaner and more nimble, like that feeling you get when you’ve shed a few pounds and can tell the difference. Basically the 2010 model has got itself in shape (losing 850gm by now running a single tailpipe has helped) and has the potential to go further and be a great pound-for-pound fighter.

The all-new 48mm Showa forks have a different outer tube shape for extra rigidity. Inside there’s a 24mm cylinder with new, smoother fork oil and shorter spring lengths that definitely add to what the chassis has to offer. This bike really does turn well. With the riding position like it is you can get right up the front but it never feels like it’s going to tuck in on you. It’s stable and sweet. There’s a 100gm weight reduction in the rear shock sub tank and the stock settings – although still a smidge too hard at the base of the stroke for me – provided a good linear damping that was much better balanced with the front forks compared to the 2009 bike.

I almost get bored of saying how good a Honda gearbox is when it comes to shifting but they really are. However, the gearing is probably a weak point of the bike if you are a slightly above average racer. You have to short shift a lot and you have to do it quick. I often found myself flat out in fifth and then having to go right down to first too many times in corners for my liking. There’s an argument for saying ‘what’s the point of having five gears if you aren’t going to use them’ I suppose but, nevertheless, I just think they should be taller. Even though you can change the sprockets to suit I think it would be beneficial if the gears in the motor were different.

The auto-decompression system works well and the starting was good, in fact the whole bike was good. With the weight saving and new lower centre of mass they were already onto a winner but Honda have also managed to beef-up the powerplant and in making a new bike from the ground up have progressed a lot in a short period of time. Now they have a bike that in the hands of the right rider – both at club level and on the world stage – has the minerals to be winning races for sure.