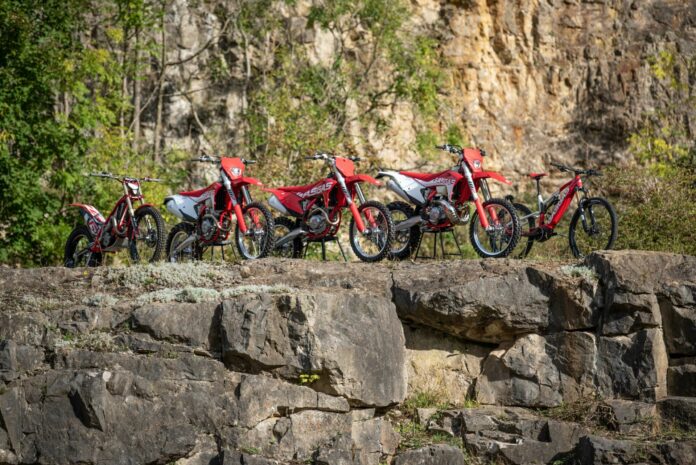 With the launch of the new Enduro, Motocross, E-MTB and Trials range from GasGas, We got invited to take part in the United in Dirt event at the Butts Quarry in Derbyshire…

Heading to the Butts Quarry, formerly known as Ashdown motocross track on a drizzly Tuesday morning, I was met with a huge selection of toys to play on throughout the day, ranging from Enduro, Motocross, EMTB and Trials bikes, all set up on show with a red army of staff ready to help with any questions I might have. Complete with four separate tracks for us to try and out and get stuck in with the 2022 GasGas range.

I was especially excited to try the new GasGas MC250F machine on the motocross track, which I had not visited for a number of years, but heard plenty of good things about the performance and handling of the bike.

After a quick safety briefing and introduction to the new range, we got separated into our groups of four, and given our schedule for the day, of course I was on team Leia! First up we had the challenge of the Enduro bikes with GasGas enduro rider Charlie Frost leading the way on the loop created at the track, featuring some rocky hill sections and some boggy tricky bits to put the machines to the test.

First off I tried the EC250F machine, which was pretty tame but also felt a bit hard on the suspension when trying to navigate the rocky sections, which almost made me lose my balance a couple of times, so I swapped over to the 300 two stroke machine, which was a lot more nimble through the woods and made a huge difference when climbing up the rocks, and also had a bit of bite to it when riding through the boggy dirt sections of the Enduro loop.

After an hour of messing about in the woods, it was coffee time and then our chance to move over to our next discipline, Trials. Of which I had never ever tried before in my life, so that was a learning curve in itself remembering that I have no seat like usual. I jumped on board the 125 GasGas trials bike, and we were talked through controls, how to balance and how to pull off standing up by trials expert Stuart, from Trials Days, the UK’s premier trials school.

The bike itself was super light, almost felt like E-MTB weight but was super easy to manoeuvre and also felt nippy when you needed to get over obstacles pretty fast, I would definitely aim for the 125 model again if I decided to have a proper go at it. ranging from £6399 for the TXT 125 and up to £7299 for the GP 300 Model, they will be one of the best on the market. And let me tell you, Trials is way way harder than it looks! after getting my butt kicked at Limbo and also the SeeSaw doing me dirty, it was time for some lunch.

After an impressive Paella lunch in the derbyshire quarry, it was time to swap the engines for leg power as we jumped on board the brand new EMTB bikes, and were taken for a peddle around with MTB rider Scott Hambridge, who is pretty handy on one of those things.

With the bikes not being available yet in the UK, only a few selected European markets, it was great to delve into the world of mountain biking and the goal for GasGas MTB future. Featuring a Yamaha manufactured battery and power mechanism, the bikes shot up the rocky hills with ease and which meant we could do almost double the amount of laps we could normally do on the mountain bike track, and I managed to bag a few laps on the enduro model, which I might add felt like a dream coming down the rocky hills and just soaked up the bumps, and that was without changing any of the suspension settings at all.

The next part of our day was the part I was looking forward to the most, which was the jumping on board the MC250F motocross bike. After hearing great things about the 2021 model, I was excited to see how it compared to its more expensive Husqvarna and KTM brothers.

With more of an entry level price point aimed at the sunday rider having some fun, the GasGas motocross bikes come in at £500-£550 less than KTM £600-£650 less than the Husqvarna models. Ranging from £6,999 for the standard 125 model and up to £8,249 for a MC450F, but you don’t get any of the mapping and traction control choices like you do with the more expensive brands under the umbrella.

These are the few differences below with the machines:

Heading up into the motocross track, the MC250f was super smooth on the power delivery and I felt comfortable as soon as I jumped on it, it wasn’t too heavy but felt planted when cornering and jumping on the natural sections of the circuit.

This bike is ideal for someone just looking to get into riding motocross, or moving up onto a 250 from a smaller bike, as you can literally jump on and have a great day out from standard and build your confidence, which is what GasGas is all about, enjoying the ride and quite literally getting on the Gas!