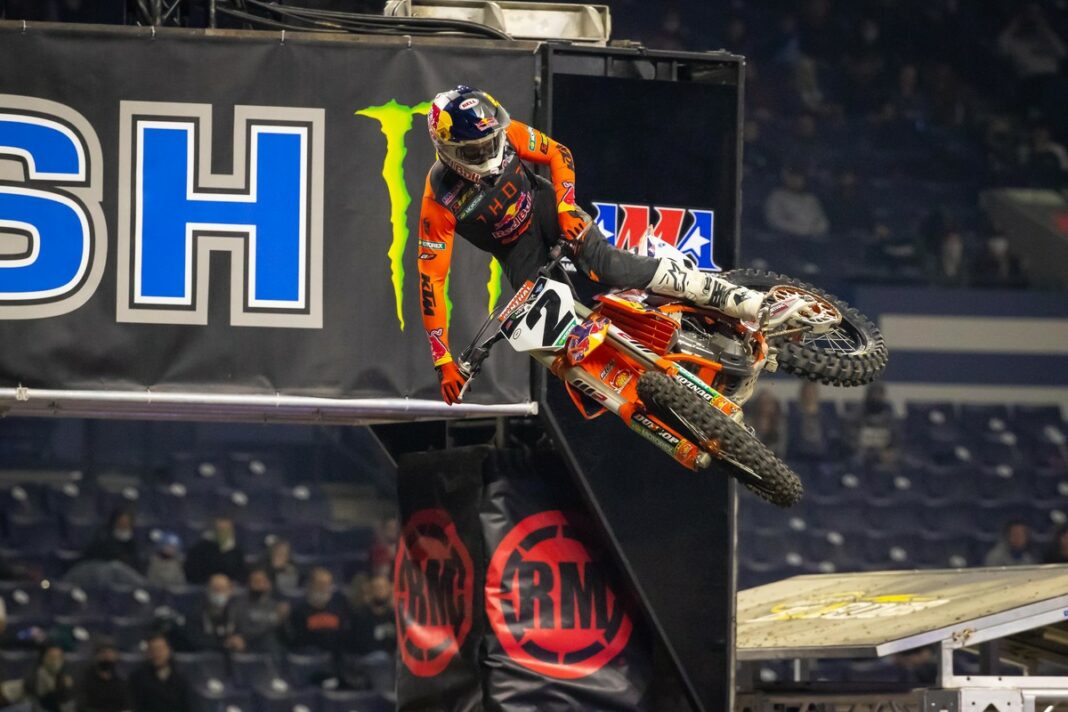 The 450SX class was hot even after the downpour of heavy rain throughout the day in Orlando. Heading into heat one, making his debut, Shane McElrath holeshots his season opener after a delayed start due to a shoulder injury, but he gives Eli Tomac a run for his money until in true Tomac fashion, he makes the pass and takes the win.

This class also saw the return of the Rockstar Energy Husqvarna rider Dean Wilson. While clearly still struggling with his foot injury, the Scotsman was slightly off the pace which saw him land himself in the LCQ, but then went onto win the LCQ and make the main.

Red plate holder Ken Roczen has a well earned confidence boost after his triple win from the last few supercross rounds, by grabbing a nice clean holeshot in the second heat, but came under pressure with Adam Cianciarulo all over him, he had to put the hammer down, to take the win.

Check out McElrath’s heat one textbook start below:

Zach Osborne hole hots the 450SX main at tonight’s night show, and gets a brilliant start whilst getting chased down by Muc-Off Honda’s Justin Brayton and HRC Honda’s Roczen. Meanwhile Tomac again got a really bad start which puts him outside the top ten on the first few laps.

Osbourne makes a mistake letting Brayton take the lead with Roczen on his case. As Webb is charging to make a pass on the German, going from third to first in one corner, he makes it stick and claims his 13th main event victory of his supercross career.

Meanwhile further down the field Joey Savatgy goes down whilst under pressure from Monster Energy Kawasaki’s Eli Tomac boosting Tomac up to seventh position, whilst Monster Star Yamaha rider Malcolm Stewart suffers more bad luck as he has what looks like a mechanical problem and rolls round for the remainder of the race.