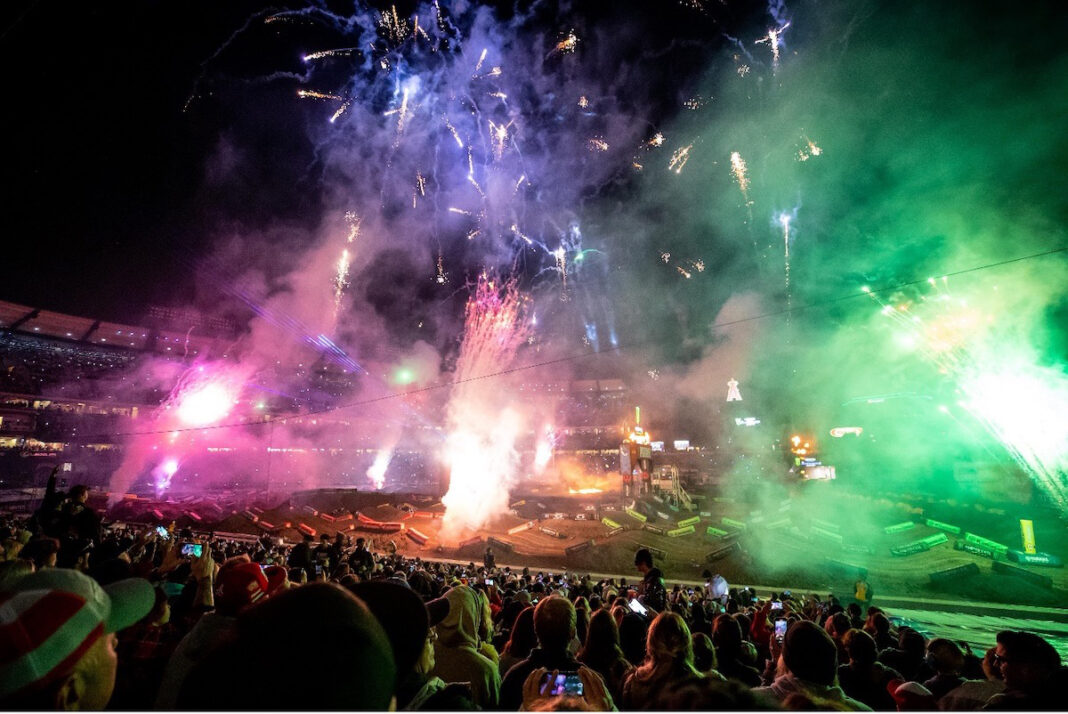 In what looks like a response to the FIM-sanctioned World Supercross Series, the owners of Supercross and Motocross in the States have announced a World SuperMotocross season closer.

Worth ten million dollars in prize money, the championship will run afer next season’s Lucas Oil Pro Motocross season finishes with a finale at the LA Coliseum, where Supercross was born in 1972.

“The creation of the SuperMotocross World Championship is the biggest and most positive step to ever happen in our sport,” said Roger De Coster, Director of Motorsports, KTM Group North America.

“Supercross and Motocross racing in the US is very strong right now and this investment from Feld Motor Sports and MX Sports Pro Racing will bring the next generation of fans to motorcycling.”

All seven of the primary factories – KTM, Husqvarna, GASGAS, Kawasaki, Honda, Yamaha, and Suzuki – are fully committed to competing with their race teams.

Factory-supported racing efforts have been the backbone of professional racing in the United States for more than five decades. Their commitment ensures that the highest level of racing competition will continue in Supercross, Pro Motocross and throughout the SuperMotocross Playoffs and World Championship.

“With the creation of the SuperMotocross World Championship, we are taking a significant step towards growing the sport into a series that will be better suited for the expanding global marketplace and its impact on our fans and sponsors,” said Kenneth Feld, Chair and CEO of Feld Entertainment, Inc.

“As media and technology continue to evolve, SuperMotocross will be able to capitalize on these innovations to reach new audiences and grow exponentially in the coming years.”

“We are celebrating 50 years of American Motocross this season and the creation of the SuperMotocross World Championship and working in unison with Supercross may be one of the most significant changes the sport has ever undertaken,” said Carrie Coombs-Russell, Chief Executive Officer, MX Sports Pro Racing.

“This collaboration will create the only off-road racing series on the planet that provides a fully supported infrastructure, from amateur development to the professional ranks for global competitors to race on the world’s most challenging and demanding tracks.”