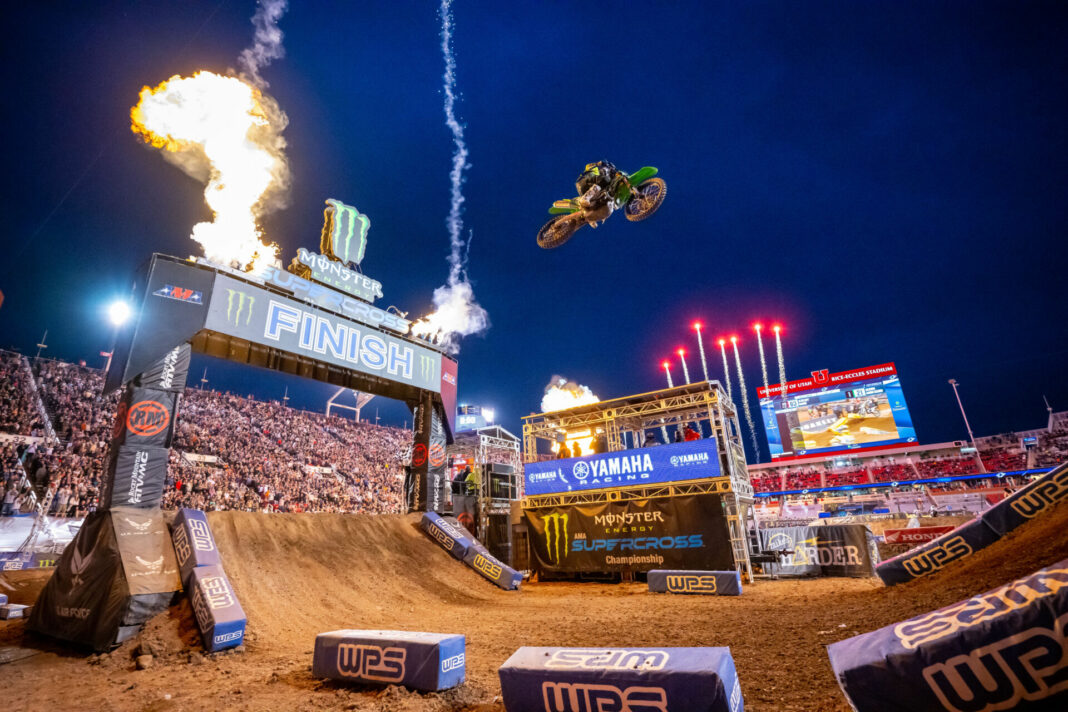 When the gate dropped for the final race of the 2022 season, Twisted Tea Suzuki’s Justin Bogle grabbed the holeshot ahead of 2021 Champion Red Bull KTM’s Cooper Webb, Anderson, and Sexton. Anderson charged early, getting past Webb before the first lap was complete then taking over the lead less than two minutes into the 20-minute plus one lap Main Event.

Sexton was quickly into second and the two front runners steadily distanced themselves from the pack. But there was plenty of action behind them. Third place overall for the season was on the line with only eight points separating Rockstar Energy Husqvarna Factory Racing’s Malcolm Stewart, Barcia, and Red Bull KTM’s Marvin Musquin. Less than four minutes into the race, Barcia moved into third place with Webb in fourth, Stewart in fifth, and Musquin in sixth.

Stewart was the rider on the move, battling past Webb then getting around Barcia just before the race’s halfway point. Just a few corners later the stadium erupted when Barcia dove across the inside of a 180 degree bowl turn and made hard contact on Stewart. Stewart popped off his bike as if it had vanished beneath him. The Husqvarna rider was quickly back up and charging to regain positions.

The crowd saw the potential for an incredible battle. As Stewart made his way forward the entire stadium was screaming. Stewart was up to Barcia’s rear fender as the clock ticked past zero. On the final lap, a lapped rider briefly held up Stewart and the last lap clash never took place. At the checkered flag, Anderson grabbed his fourth win in a row, earning his seventh victory in 2022. Sexton was close but not within striking distance of a win and capped the season with a second place finish.

Barcia grabbed the last podium spot of the year to the sounds of a crowd that did not approve of the pass that got him there. On the podium Barcia owned the move and reminded the crowd that a season podium position was on the line in the high-pressure sport that awards handsome bonus money to top finishes. As it was, Stewart’s fourth place finish was enough to earn him that third season-overall spot, and bonus, for the year.

The 2022 450SX Class season concluded with Monster Energy Yamaha Star Racing’s Eli Tomac, who was out healing an injury at the final race, taking his second premier class title. Jason Anderson finished second on the season with seven wins, eclipsing his 4-win 2018 Championship year. And in the tightly-contested battle Stewart grabbed third overall in the 2022 Monster Energy AMA Supercross Championship.