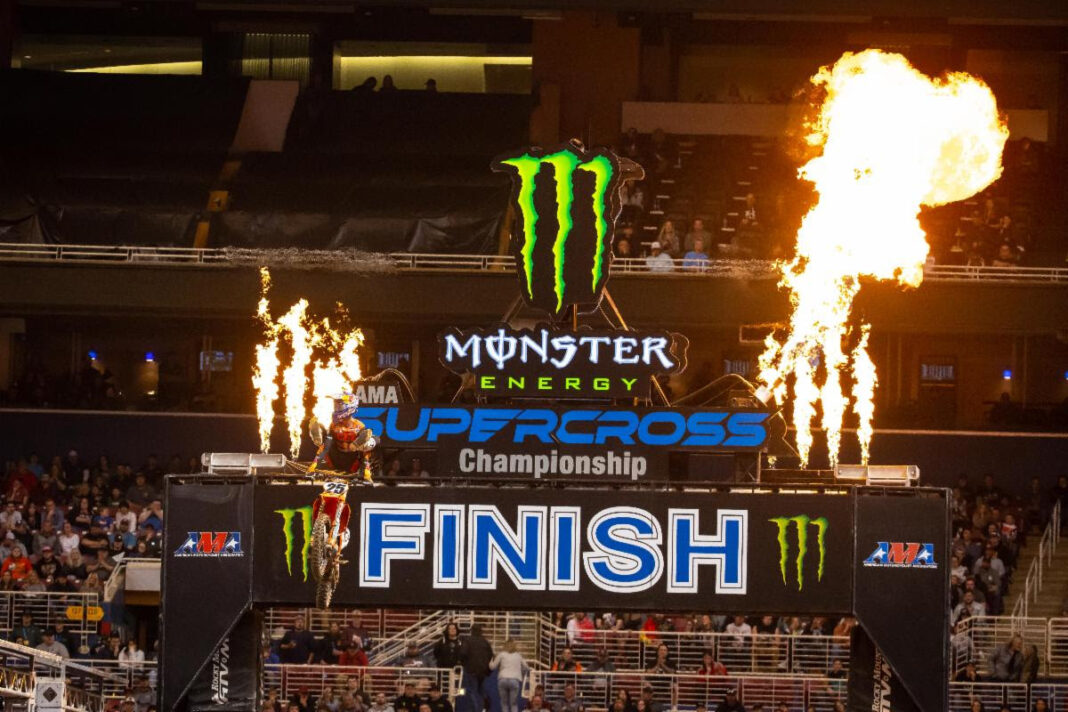 In a return to the top step of the podium, Red Bull KTM’s Marvin Musquin was brilliant inside The Dome at America’s Center to take the victory at Round 13 of the 2022 Monster Energy AMA Supercross series.

Chase Sexton grabbed the holeshot in Race one and rode a nearly flawless race to an uncontested win in the first of the three 12-minute plus one lap races the 450 riders faced. After starting up near the front, Marvin Musquin had the pace to remain unchallenged in the second place spot.

The excitement came just behind as Rockstar Energy Husqvarna Factory Racing’s Malcolm Stewart took over third place two laps into the race, and soon after had Eli Tomac on his rear fender and pushing to get around. On the final lap Tomac made a pass, but Stewart battled immediately back, reclaimed the spot, and held on until the checkered flag. Race 2 had a similar cadence to the first. This time it was Musquin grabbing the holeshot. He was pressured early by Monster Energy Kawasaki’s Jason Anderson, but after a few laps Musquin pulled out of attack range and was not challenged again for the top spot. Tomac found himself in ninth place at the start; he made quick early passes, then took until nearly the midpoint to get around Troy Lee Designs Red Bull GASGAS Factory Racing’s Justin Barcia for fourth.

Malcolm Stewart took a hard crash, wedging his bike’s handlebar into his knee brace. He remounted and put in a little more track time before finally pulling off and heading back to the pits. Musquin took the win ahead of Anderson, Sexton, and Tomac. The finishing order gave Musquin the advantage going into the final race of the night with an overall score of 3 against Sexton’s 4. Anderson and Tomac sat with 8 points and Barcia held 10.

In Race 3 Tomac was on point from the drop of the gate with Musquin right on his rear wheel and Anderson looking aggressive behind Musquin. Anderson applied the pressure for the first two and a half minutes before Musquin managed some breathing room. Behind them, Sexton was recovering from a poor start but sliced his way quickly up to third place before Race 3’s midpoint. In the closing laps Musquin closed on Tomac but never got close enough to mount a challenge for the lead before Tomac stretched it back out to win the battle but not the war. Musquin’s victory makes him the fifth race winner of the season with four rounds still remaining.