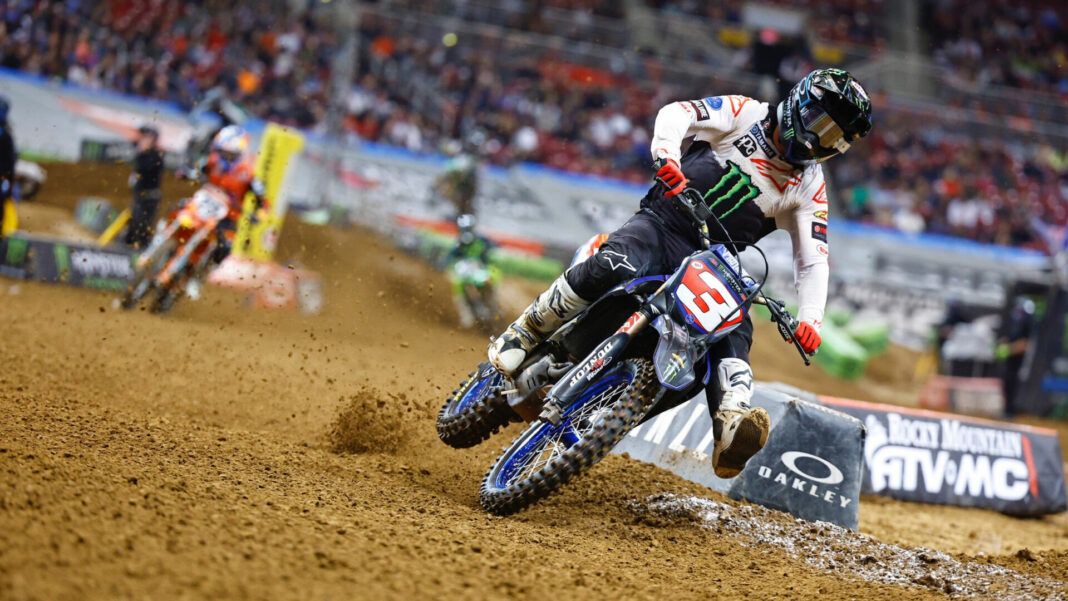 Monster Energy Yamaha Star Racing’s Eli Tomac enjoyed one main event win on his way to third overall at the final Triple Crown event of the season inside The Dome at America’s Center.

Tomac used his time in practice to get comfortable on the technical track, ending up fourth in qualifying. The opening race didn’t showcase the great starts expected from the Coloradan, who came around the opening lap in sixth. With the track not allowing for a great opportunity to pass, he worked into a good pace and made it up to fourth to finish out the first main event. The second main event was more of the same, but this time Tomac had to work harder to make it up to his fourth-place finishing position after starting further back in eighth. Even with two fourth-place finishes, the red-plate holder was in a good position for the podium going into the final race of the night.

After two tough starts, Tomac pulled an impressive holeshot in the third main event. The clear track allowed him to put in fast laps and pull a healthy gap, eventually winning by a six-second margin. His 4-4-1 result propelled him onto the podium and allowed him to earn two extra points and increase his championship lead to 56 points.

“It was a good day and another good night for the championship points.” Said Tomac. “It was hard-fought in the first two motos because I didn’t put myself with the lead group, so I was stuck behind in both of those first two.”

“That was a little bit frustrating, but we never gave up, and then in the third moto, I got a really good holeshot and rode much better and found good lines on the track. It was a very technical track this week. It was a little bit of a slower track and a steeper track, so it was just a different feeling.”