Home Supercross AMA Supercross St. Louis SX: ‘I was looking forward to going for a clean... 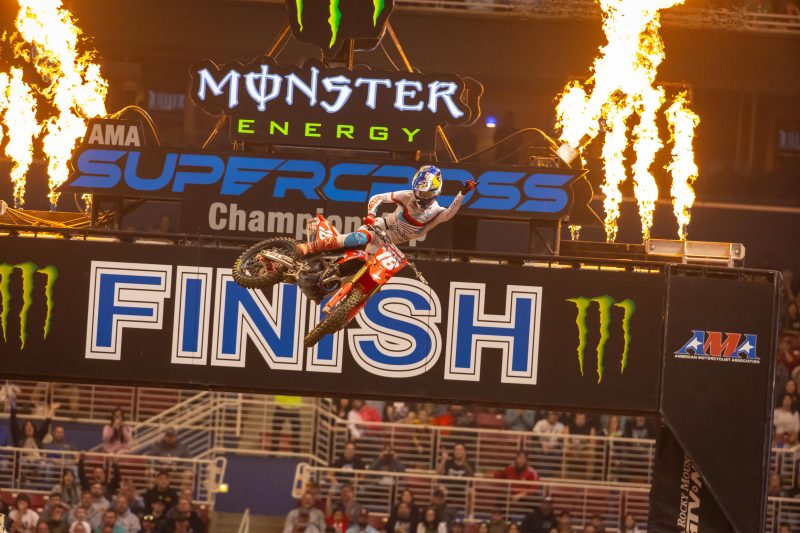 Between Sexton and Lawrence, Team Honda HRC won the first three races at the St. Louis Triple Crown AMA Supercross, and although overall wins weren’t in the cards, both riders finished second and made headway in their respective points chases.

In the first 250SX race, Lawrence suffered a terrible start and crossed the line eighth, but he quickly began picking off riders. He got some help when RJ Hampshire went down while leading, and the Australian was in front by lap eight.

From there, Lawrence rode the final four laps in command, winning by more than five seconds. Race two was marked by a red flag, and following the restart, Lawrence assumed the lead with seven laps remaining, then took another win with a six-second margin. A bad start in race three was followed by an early crash when Lawrence ran into the back of another rider, leaving him dead last. He made it up to fifth by the finish, earning second on the night.

“I was looking forward to maybe going for a clean sweep, even if RJ [Hampshire] was for sure making it hard on me.” said Lawrence. “I didn’t really do any practice starts on Thursday and was thinking I should be okay, but I guess I wasn’t.”

“I thought I gave that guy enough room in race 3, but I guess you just have to be a little more cautious; I blame myself. RJ deserves it tonight; he was there each time and put himself in good positions. I wish I could’ve kept the win streak going, but it is what it is. I still got second, thankfully, and we’re just going to keep on charging. Hopefully we can finish it off sooner than later.”