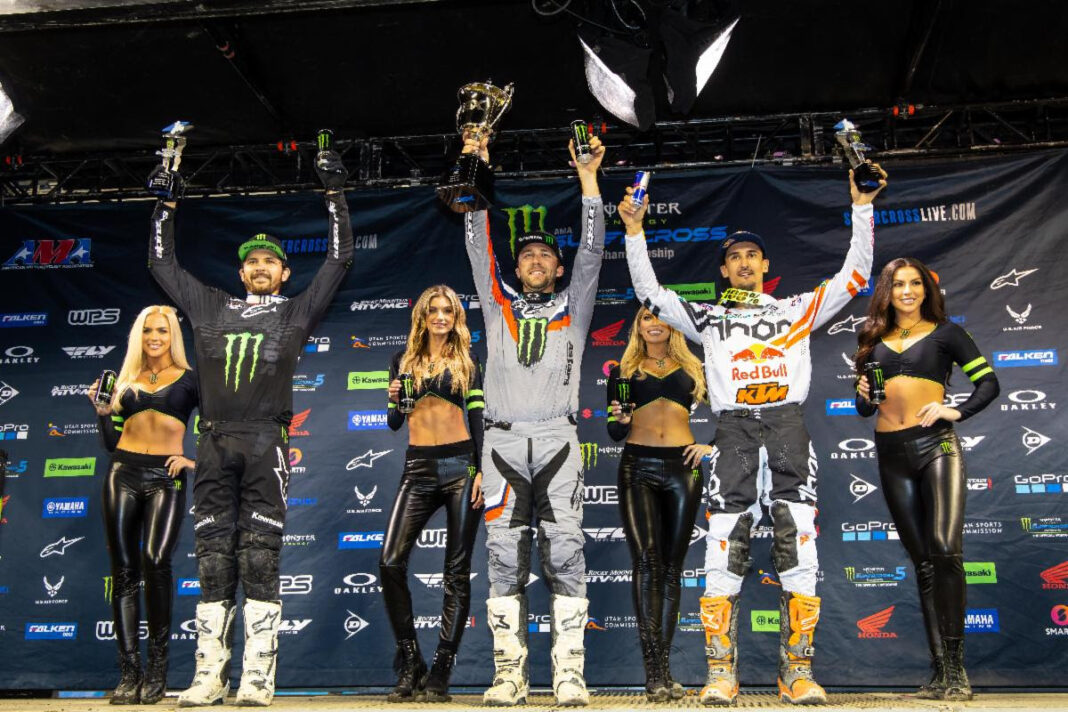 Eli Tomac wasn’t the fastest qualifier and didn’t win his Heat Race, but he had the class covered when the gate dropped for the twelfth 450SX Class Main Event of 2022. Tomac shot into the lead ahead of Troy Lee Designs Red Bull GASGAS Factory Racing’s Justin Barcia, Musquin, and Anderson.

Anderson moved into third spot before one lap was completed in the 20-minute plus one lap Main Event. From there, Tomac showed the others the fast way around a track that was slick and rutting up deeper as the race progressed. Four minutes into the racing, defending champion Red Bull KTM’s Cooper Webb moved into tenth place while recovering from a poor start.

Ahead of him the top group was slowly spreading apart. Then, just before the race’s midpoint, Barcia jumped off-line, landed on a Tuffblox, and went down hard in a rhythm lane. Barcia remounted in fifth behind Tomac, Anderson, Musquin, and the day’s fastest qualifier Rockstar Energy Husqvarna Factory Racing’s Malcolm Stewart.

In the closing laps Webb reached and clung to Barcia’s rear wheel but could never make the move past. Tomac took the win in front of a loud and enthusiastic Washington crowd, who hadn’t had a Supercross event in the Pacific Northwest since 2019. It was Tomac’s fifth-straight win, tying his personal record, and placing him into an all-time-wins tie for fourth with retired champion Chad Reed.

It also pushed Tomac 54 points ahead of his nearest competitor for the 2022 championship. Anderson grabbed his first podium since Round 8, and Musquin kept up his podium streak in Seattle that covers both 450SX and 250SX racing; the Frenchman has podiumed at every Seattle Supercross in which he’s competed.