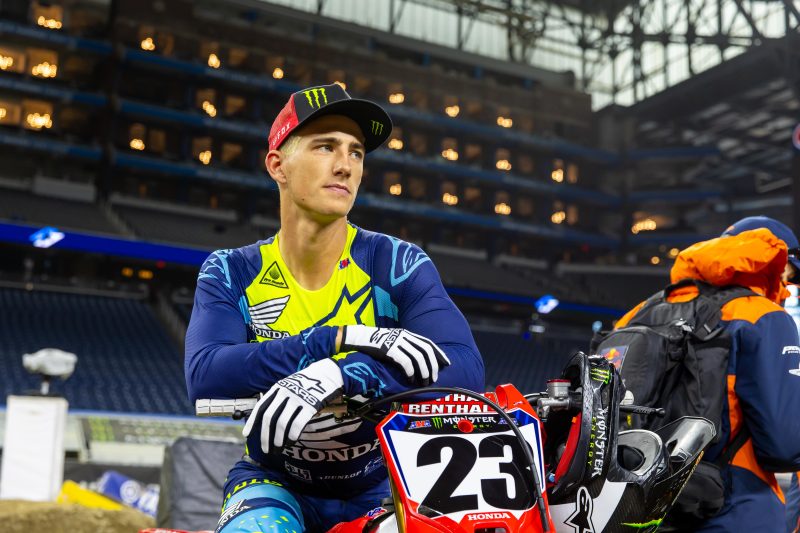 HRC Honda’s Chase Sexton had a tough weekend in Detroit, suffering a huge crash with Red Bull KTM’s Cooper Webb in which Sexton was sent to the medical centre.

By the time the gate dropped for the 450SX main event, the short track was quite treacherous and, over the course of 27 laps, it would claim a number of top riders – Team Honda HRC’s Chase Sexton unfortunately among them. The Illinois native completed the first lap in sixth place and, after dropping back to ninth a few laps in, he set about improving his situation. He dispatched a number of riders, and by lap sixteen he sat fifth, pressuring Cooper Webb. When Webb made a mistake in a rhythm section, Sexton had nowhere to go and plowed into him, sending both riders down hard.

Sexton was taken to the Alpinestars Medical Unit where he received stitches to a cut lip, but amazingly, further damage was limited to general soreness and friction burns to his back. MotoConcepts’ Justin Brayton and Vince Friese were the top-finishing Red Riders, in fifth and sixth, respectively, with SGB Unlimited Honda’s Cade Clason also making the top ten.

“Overall, the Detroit Supercross was a pretty rough race for me. I had a crash in the heat race trying to go around a lapped rider, and in the main event, Cooper and I got together, which ended my night.”

“It was unfortunate, but thankfully I’m healthy apart from a few scrapes and bruises. I’m looking forward to Indianapolis, which I consider one of my home races, and I’m excited to get back out there and make up for it.”

You can view the huge off below: