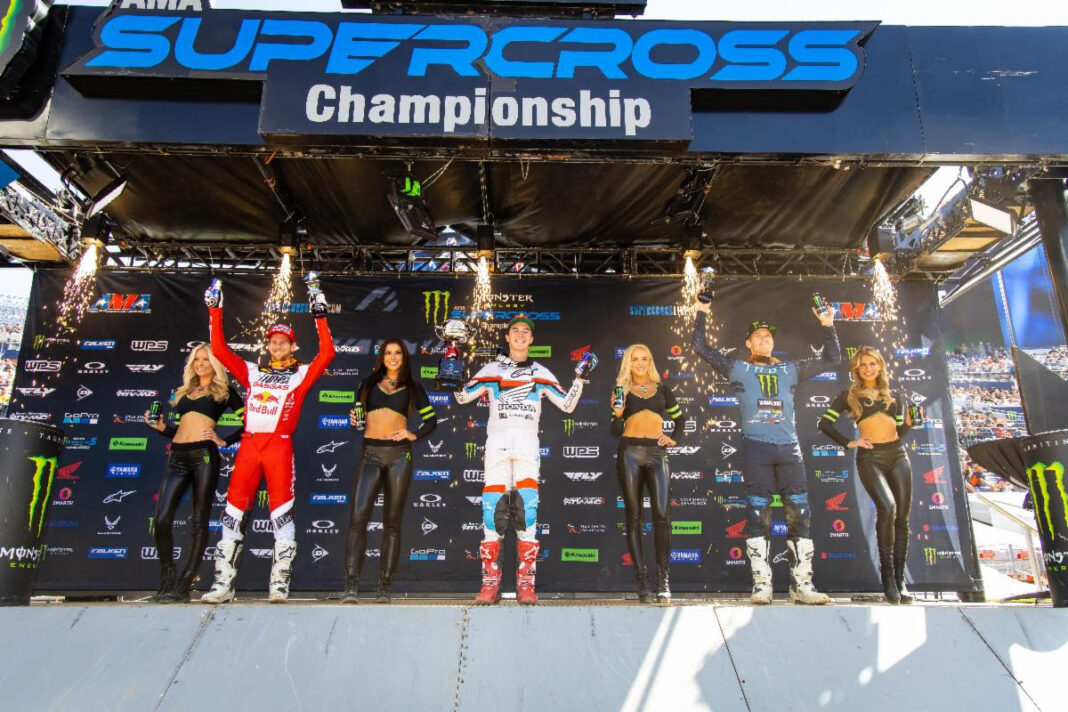 In a thriller of a Western Regional 250SX Class Main Event, also with the title on the line, Team Honda HRC’s Hunter Lawrence held strong for the win to take the championship to the final round next weekend.

In the Western Regional 250SX Class, Monster Energy Yamaha Star Racing’s Christian Craig sat in position to wrap up his first Supercross title with a win or by gaining three points over Hunter Lawrence. When the gate dropped for the Main Event, Lawrence grabbed the holeshot ahead of Rockstar Energy Husqvarna Factory Racing’s Jalek Swoll and Craig. Craig was quickly into second place and up to Lawrence’s rear fender.

From the first laps Craig applied intense pressure, showing a wheel to Lawrence in more than one section of the track. Craig looked to have the speed, and a line in the whoops that would deliver the championship. Lawrence had said before the race he enjoys the pressure, and he proved his ability to keep his composure as he maintained his sliver-thin lead. It was Craig who fumbled. Just before the race clock hit the ten minute mark in the 15-minute plus one lap race, Craig slid out on the take-off into the sand section.

He dramatically looped as he fell off the bike when he landed. The crash dropped Craig to sixth place as Hunter held a comfortable lead over Troy Lee Designs Red Bull GASGAS Factory Racing’s Michael Mosiman. Craig was on the move on the slick, hard-packed track. With just over two minutes left on the clock he passed Monster Energy Pro Circuit Kawasaki’s Jo Shimoda to keep his podium streak alive for 2022. Craig goes into the final round in Salt Lake City with an 18 point lead. To complicate the championship-deciding race it will be the second Dave Coombs Sr. East/West Showdown of the year, and Hunter Lawrence’s younger brother Jett will be on the track as the championship is settled between Craig and Hunter Lawrence.