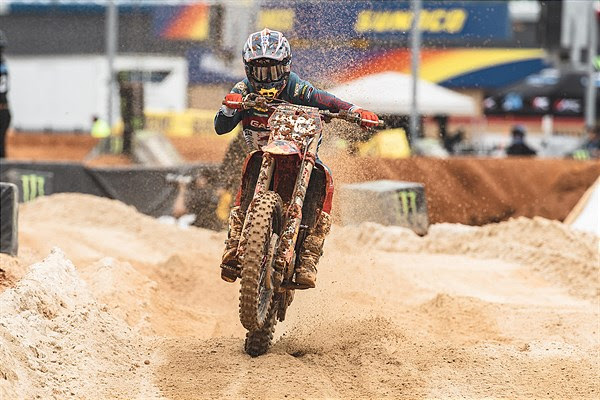 In the Main Event, Barcia made a mad dash off the start to capture the holeshot and early lead on lap one. With longer and rougher laps inside Atlanta’s NASCAR facility, the front-runners swapped spots several times early on and Barcia found himself shuffled back to third by the second lap.

The race leader went down on lap three, allowing Barcia to swoop in for second, but he made a mistake and slid out two laps later. With a quick re-mount in fourth, he ignited another charge mid-race but this time he made a costly mistake through the whoops, swapping side-to-side before catching himself just enough to veer off-track and lose two more positions. He kept it together for the rest of the race to ultimately secure a sixth-place finish.

“It was a pretty crazy day with a different schedule and only having one practice.” Said Barcia. “I ended up qualifying P6, which was not a bad place since the track was pretty slippery and kind of wild and one-lined.”

“I wasn’t particularly stoked on my heat-race finish but I got through it and did some bike changes for the main and ripped an awesome hole shot, it felt so good! Unfortunately, I had a few mistakes, went down and just didn’t ride that well, so it was definitely a tough night but I’m a tough SOB and I’m going to go back to Cali, work hard this week and come out swinging at the next round!”