Home Supercross AMA Supercross Atlanta SX: ‘I haven’t had this much fun riding, ever’ – Sexton 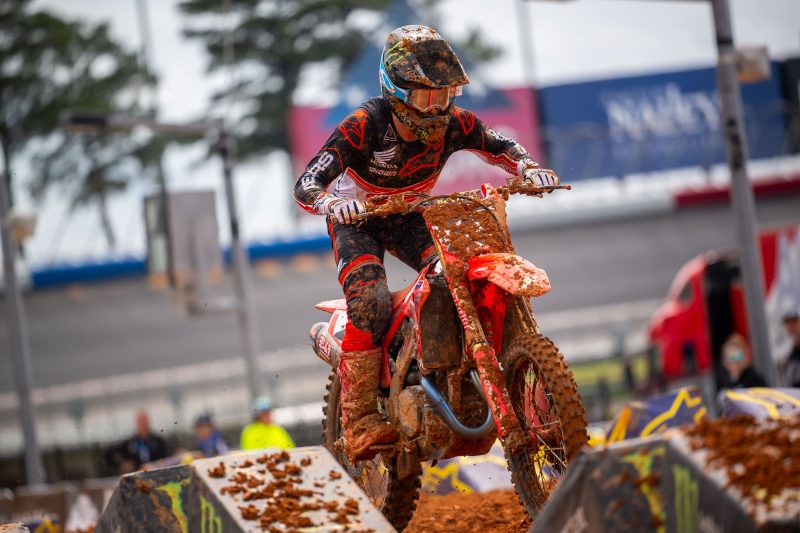 HRC Honda’s Chase Sexton grabbed a third overall finish at this weekends Monster Energy AMA Supercross series, at round fourteen of the series.

Sexton emerged second from turn one in the 450SX main event, then got by the leading Justin Barcia in a rhythm section on lap two. Unfortunately, the subsequent lap saw him fall in a turn after the sand whoops, and he had dropped to sixth place by the time he rejoined the race. Turning the fastest lap times of anyone, the 22-year-old worked his way forward, moving into a podium position with two laps remaining and staying there to the end.

“It was a really good day for me, riding-wise.” explained Sexton. “I felt good here last year, and I was excited to be coming back. I felt good with the track again, and I probably haven’t had this much fun riding my dirt bike, ever.”

“The rain made it pretty technical – still pretty fast, but I think it slowed down a tad. I knew Jason [Anderson] was going to be good, and Eli [Tomac] obviously. I put myself in a good position, and then I came into that corner and couldn’t really save it; it was just gone so fast.”

“I had to gather my thoughts and just go for it; I knew I could probably make it back to the podium if I rode like I know how, and that was my goal after my fall. I’m thankful to be back up there, but obviously I want to be where Jason is sitting. I’m glad the team and I have made this much progress. Sometimes it doesn’t go your way, and you’ve got to keep digging. I know that sunrise is coming.”