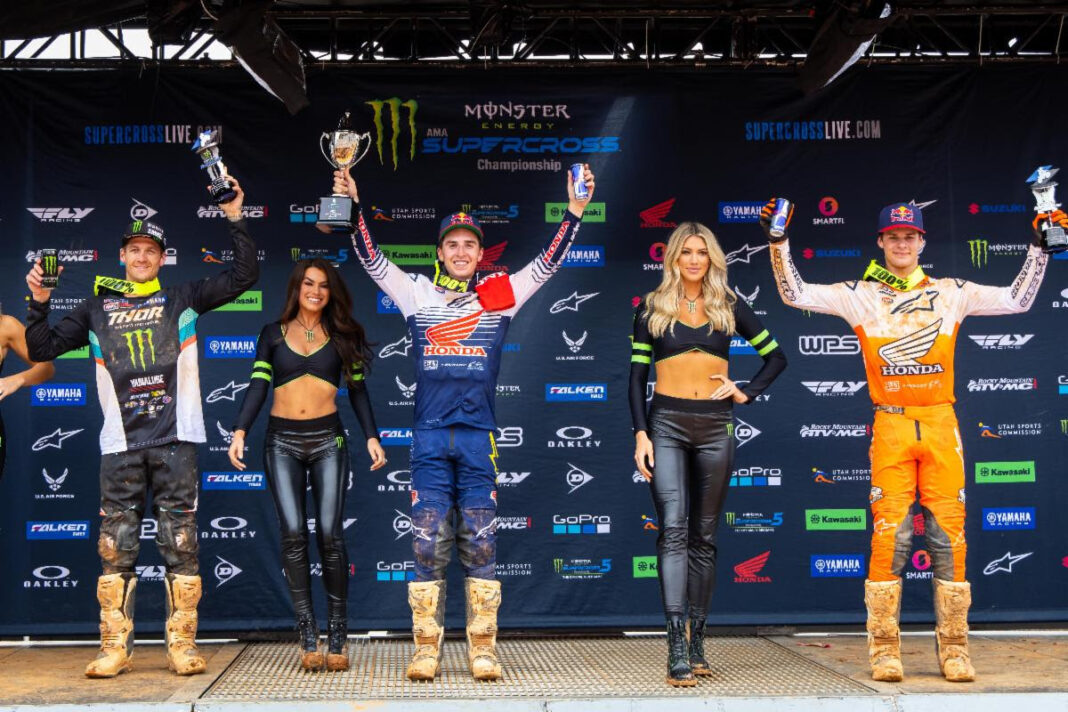 HRC Honda’s Hunter Lawrence shot to victory in the East/West Showdown at round fourteen of the Monster Energy Supercross championship in Atlanta.

In the unique Dave Coombs Sr. East/West Showdown that pits the top riders from both regions against one another, Monster Energy Pro Circuit Kawasaki’s Jo Shimoda jumped into the lead with a holeshot ahead of Rockstar Energy Husqvarna Factory Racing’s RJ Hampshire and Hunter Lawrence.

Hunter Lawrence was quickly into second place after a battle with Hampshire while his brother Jett crashed exiting the whoops and dropped outside of the top ten. Craig steadily moved forward through the pack while Jett charged frantically to climb back toward the front. Six minutes into the 15-minute plus one lap race Hunter Lawrence took over the lead and was never challenged for it. One lap later Craig slipped into second and held it to the finish. With two laps remaining Jett Lawrence reached Shimoda and the two had a few near tangles. Lawrence emerged with the final podium position and Shimoda held on for fourth.

The Atlanta race commemorated Monster Energy Supercross’ ongoing partnership with St. Jude Children’s Research Hospital through the Supercross – St. Jude This Race Saves Lives initiative. The entire race was dedicated to the St. Jude mission – Finding Cures. Saving Children., with athletes and teams incorporating St. Jude patient-inspired artwork into their gear designs and motorcycle graphics. These unique items were then autographed and collected after the race to become part of the upcoming St. Jude – Supercross online auction that will run from Monday, April 25 through Monday, May 9.