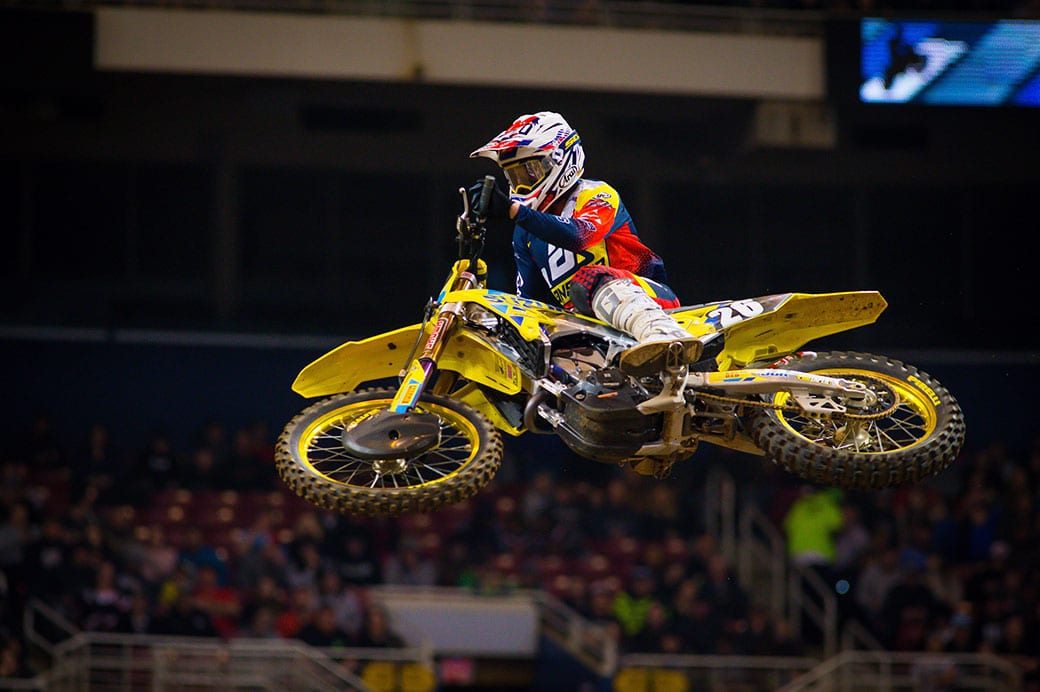 JGRMX/ Yoshimura/ Suzuki Racing’s Alex Martin rode strong inside The Dome at America’s Center in St. Louis, Missouri, at Round Two of the 2020 Monster Energy FIM World Supercross series racing his Suzuki RM-Z250 just .245 seconds back from a podium finish.
In the Premiere class, Jimmy Decotis ran strong and picked up more experience on his Suzuki RM-Z450 during the second of his select 450 class rounds before tackling the 250 East Coast series. Full-time premier class rider Fredrik Noren suffered an injury while in direct-transfer position in his heat race.
Martin had earned the sixth gate pick in the 250 main thanks to a podium finish in his heat race. He launched from just inside the starting gate and crossed the holeshot line in fifth place. He reached fourth place on lap 14 and in the final four laps closed the gap on the third-place rider until he was right on the rear wheel; they jumped the finish line less than a bike length apart. With A-Mart’s solid fourth-place finish, he moved up to fifth in the overall point standings early in the 2020 season.
“It was nice to be back racing in the Midwest as St. Louis is the closest race to home for me,” said Martin. “We made small changes for the main that seemed to help as it was the best I felt and rode all day, ending up three tenths out of a podium position with fourth on the night. And we’re two points out of third in the championship. Excited to keep the momentum going heading into Anaheim next weekend!”
“Alex was fast and just needs to get going sooner and he will be on the podium. He rode hard and kept pushing to finishing fourth in the main,” said Team Manager Jeremy Albrecht.
Jimmy Decotis logged more time in the premier class aboard his JGR-tuned RM-Z450 to start his season off with racing before focusing on the East Coast 250 series. St. Louis, which has traditionally been an East Coast round, gated 250 West riders this year. Decotis held his own in a series he’s not contesting for points, qualifying directly from his heat race and into the 450 main where he turned his quickest lap time on the sixth lap.
“I’ve been working hard during the week trying to improve myself, and at Round Two I felt like we made some positive changes,” said Decotis. “I’m enjoying the process of being back at the races and working with my team. Ready to improve on my mistakes this weekend and continue to progress and learn as a racer when we head back to Anaheim next weekend. I’m hoping for a speedy recovery for my teammate Freddie as well.”
Fredrik Noren was running directly behind his JGR teammate Decotis in the second heat race, both riders in a direct-transfer position, when on lap five the Swedish rider had a small miscalculation that unfortunately took him out of the race, and the evening, on a night he was looking for a strong finish.
“I was very excited coming into the weekend and had a good practice week,” said Noren. “I was running comfortably in a transfer spot with a few laps left to go when I slightly overshot a triple in a rhythm section. When I landed I felt a snap in my leg. I had to pull off and have come to find out that I’ve injured my ankle. At this point, I’m unsure of the recovery but hoping for the best so that I can be back at the races soon.”
Albrecht added, “Freddie was feeling better and more relaxed all day. He was in a good spot to make the Main Event and made a small mistake over-jumping and injuring his lower leg. Bummed for him as he has been working hard on his SX skills. He will be back but we’re not sure of when his return will be yet.”
The series returns to Anaheim next weekend for Round Three. The JGRMX/ Yoshimura/ Suzuki team has its sights set on more progress, more strong riding, and that first podium finish for 2020.
[more-from heading=”More AMA Supercross” heading_url=”/news/supercross/ama-supercross/” category=”ama-supercross”]