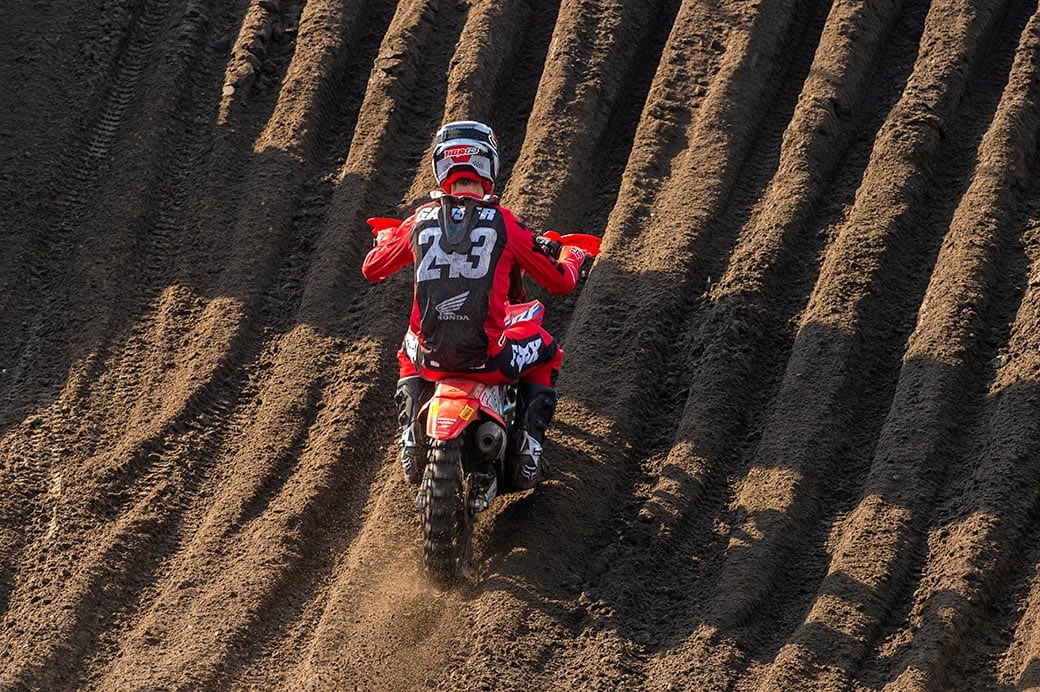 Gajser on facing tough Sunday after being denied qualifying win

Team HRC’s Tim Gajser was comfortably leading the MXGP qualification race at Valkenswaard, Netherlands when an unfortunate electrical issue forced the rider to pull off the track on the sixth lap.
Gajser had led the race from the beginning, after grabbing a great holeshot from third gate pick and had pulled out over five seconds to the next rider when the unfortunate issue took place. This now means that the defending champion will line up from the very outside in tomorrow’s points-scoring motos, which will be a real challenge due to the angled nature of the starting gate at the Dutch sand circuit.
For team-mate Mitch Evans, it was a bit of an up and down day, but the Australian finished it strongly by overtaking six riders in the last six laps to finish 12th place. With really difficult on-track conditions due to the heavy rain which had hit the facility, putting together a clean lap with over 35 other riders proved hard, but Evans was eventually able to get ninth gate pick for the qualification race.
The #43 didn’t get the best jump out of the gate and had to fight to round the first lap in 15th place. Although he made a couple of passes early on, a crash on lap five dropped him down to 18th when he remounted. However, as he proved in Matterley Basin last weekend, Evans was able to pass a lot of experienced MXGP regulars to give him 12th gate pick and a chance at repeating his efforts from Great Britain where he finished fifth overall on his MXGP debut.
The next time the riders hit the track is at 9.45am Sunday morning for the 15-minute warm-up session, before they have their two motos which drop the gates at 13:15 and 16:10. Both Gajser and Evans will be hoping that their Honda CRF450RW’s can propel them to good starts as they look to build upon their round one points totals.
Tim Gajser: “Obviously, I am very disappointed for that to happen during this qualification race, especially as I was leading the race comfortably and riding so well. I had a good five-second gap out front and felt really good on the bike and things were going as I hoped in regards to tomorrow’s main races.
“Unfortunately now, I will have the very outside gate pick which will makes things extremely difficult in the races because the starting gate is angled further away from the first turn, the further out you get. Still, I will keep fighting until the end of each race and try to score as many points as I can.”
Mitch Evans: “Today was very difficult as the track was tricky and technical to ride, but at the same time, it also made it fun. It’s a surface I haven’t really ridden much in life, so I was just trying to get in laps and focus on learning it.
“In the qualifying race I got off to a bad start and was riding way too aggressively and trying to make stupid passes on a one-lined track, which nearly caused me to crash. Then I did crash, which lost me a few positions but after that, I rode a lot better and was actually happy with my riding. I’m looking forward to tomorrow’s racing where I’ll try to make sure I ride like I did towards the end of that moto.”
[more-from heading=”Latest News” category=”news”]

Yanks go home. Oh, you have…

Paulin: ‘I have respect for all the riders’

David Miller - January 21, 2021
Catching up with Brits Dean Wilson, Dylan Woodcock and the Muc-Off team after the second Houston Monster Energy Supercross round…

Honda's Monster Energy Supercross team leader Ken Roczen has hit back at organisers, saying his four-point penalty for jumping while under a...
Read more

Dylan Ferrandis is the third championship-calibre rookie in the past five years to have jumped into the Monster Energy Supercross 450 class...
Read more

Catching up with Brits Dean Wilson, Dylan Woodcock and the Muc-Off team after the second Houston Monster Energy Supercross round…
Read more

Honda's Monster Energy Supercross team leader Ken Roczen has hit back at organisers, saying his four-point penalty for jumping while under a...
Read more